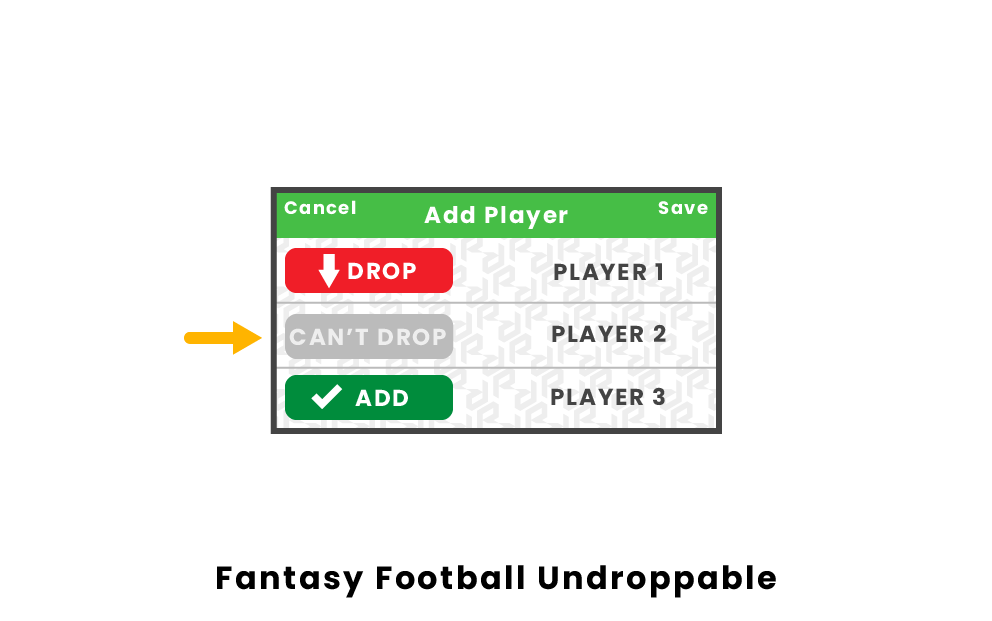 In fantasy football, one of the many actions a team owner can perform is dropping players, which is similar to NFL coaches cutting players from a team in real-life football. Owners in fantasy football will often drop players based on poor performance, but sometimes, fantasy football websites designate certain players as “undroppable” because they persistently do very well. Read on to learn more about these “undroppables” and how they can impact your fantasy team!

What is an Undroppable Player in Fantasy Football?

An undroppable player in fantasy football is a player that cannot be “dropped” by the manager of a team, meaning the player cannot be released into free agency, where other teams then have the opportunity to add the player without compensation.

Why Can’t I Drop a Player in Fantasy Football?

Following the draft, team managers are given a list of undroppables, which contains every player that cannot be released outright and must be traded in order to change teams. Undroppable players are a mandatory setting in public leagues. While the commissioner of a private league can choose to disable this feature, many elect to keep it and maintain a level playing field across the league.

Which Players Are Undroppable?

What is the Undroppable Players List in Fantasy Football?

Each year ESPN and various fantasy sites release an undroppables list for the upcoming season. The list exists to alert fantasy managers to the fact that if they draft these players, they will be stuck with them for the entire season unless they can execute a trade.

Why Do Undroppable Rules Exist?

Rules surrounding undroppable players exist primarily to prevent collusion. Without a list of undroppable players, two well-acquainted managers could strike a deal in which the manager of a struggling team drops star players so that the manager of a contending team can scoop them up and drastically increase their chances of winning the league and possibly a large sum of money.

Below is a list of the players that are currently undroppable heading into the 2022 fantasy football season:

Are kickers or defenses ever undroppable in fantasy football?

Can undroppable players be traded in fantasy football?

Is there a difference between the ESPN and NFL Fantasy undroppable list?

Although undroppables lists are largely identical, they do vary by platform, so it is a good idea to check before drafting a player or initiating a trade. Undroppables lists can change over the course of the season as players are added or removed based on their performance. Although the league commissioner in a private league can choose not to use an undroppables list, public fantasy leagues require managers to adhere to the list.

Can players be removed from the undroppable list mid-season?

While it is uncommon for players to be removed from the undroppable players list mid-season, it can happen on occasion, most often in the case of injury. Certain fantasy sites, such as ESPN, state that injury does not automatically remove an undroppable player from the list, on account of the fact that they may return, but in certain cases, this can occur, and players can also be removed for a decline in performance.