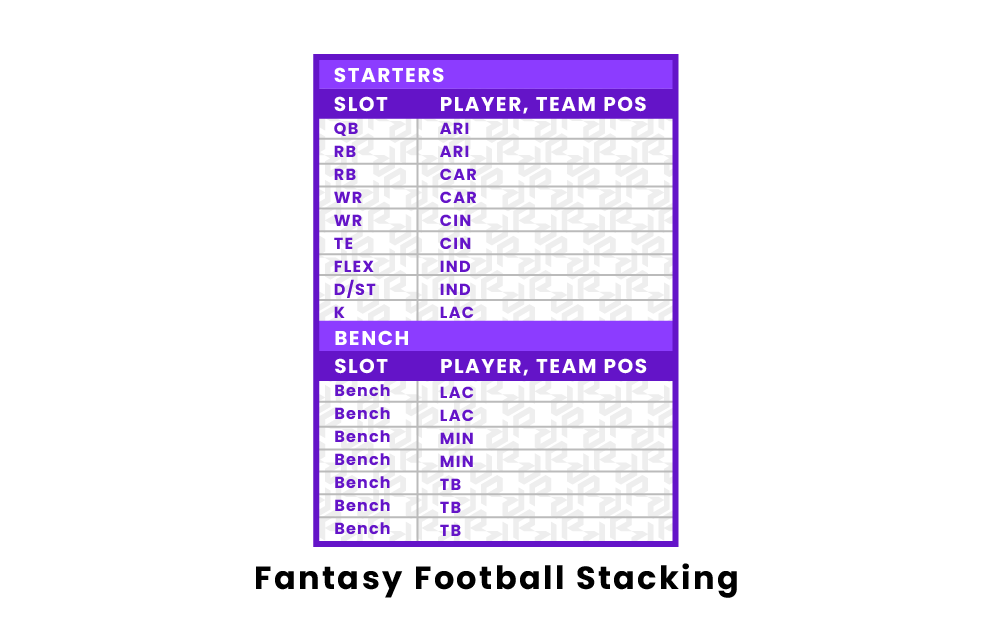 One of the major draws of fantasy football is the ability to forge a dominant team by combining the best players from various squads in the NFL, but is there ever a reason to draft multiple players from the same team onto your fantasy roster? As it turns out, this strategy is very common and is referred to as “stacking.” Stacking can have a number of impacts on your fantasy season, both good and bad alike, so read on below to learn all about the various facets of stacking in fantasy football!

What is Stacking in Fantasy Football?

The term “stacking” in fantasy football refers to fantasy owners using multiple players from the same team in their fantasy lineups, hoping that the team will perform well collectively and yield double the points.

How to Stack in Fantasy Football

Ideally, when you draft the second player in the stack, they should have a significantly lower projected value than the best available pick in their position. This allows you to draft them in a later round and use earlier picks for more highly-ranked players.

One of the more popular approaches with regard to stacking is to set your lineup with a quarterback and wide receiver from the same team. Ideally, owners would like to stack the quarterback with the team’s top receiver, hoping that they will earn points for both passing yards/passing touchdowns and receiving yards/receiving touchdowns.

Another popular stacking strategy is to stack one team’s wide receiver and running back in the same lineup so that the entirety of that team’s offense is accounted for from a fantasy perspective. In other words, success on both running plays and passing plays will yield points for the owner’s fantasy football lineup.

The quarterback is the root of many good stacks. In addition to being stackable with receivers and backs, they can be successfully stacked with tight ends.

Stacking two running backs can also be a valuable tactic, especially if their quarterback is hesitant to throw the ball or if they are facing a defense that stifles passing.

Stacking is a high-risk strategy with the potential for great rewards. By using two players from the same team, the owner is essentially going all-in and relying on that team’s offense to perform well as a whole. If the offense plays well, the owner benefits from nearly double the fantasy points that would’ve been achieved without stacking. If the offense falters, however, the owner suffers from a poor output from not just one but two players.

A major benefit of stacking is that it can often take advantage of established player relationships in order to gain points. For example, if you draft a quarterback from one team who has a good relationship and playing record with a wide receiver from the same team, stacking those two players can bank on the quarterback continuing his pattern of making many passes to that receiver, which will increase your points exponentially, especially if you are in a PPR league.

While stacking has some obvious advantages, there are undoubtedly risks that come along with it. The clearest drawback of stacking is the risk of your stack not performing as well as it seemed when you made it. Sometimes, players and teams don’t work together as well as analysts predict, and if you have placed all of your eggs in one team’s basket, a failure to return on their promise could ruin your chances of placing in your league. At times, team owners tend to value players on their favorite teams more; this bias could result in stacking picks based on favoritism rather than performance.

The second risk of stacking is less obvious, that being the fact that stacking forces you to overlook a wide variety of players in favor of drawing several roster positions from one NFL team. By sticking to one team through stacking, you are, by necessity passing over players from other teams who are more highly ranked. While this may be a necessary or desired sacrifice, it can lead to some regrets later on, especially if teams in your league that draw their players from various teams do better than yours.

What is a stack in fantasy football?

A stack in fantasy football is a group of two or more players on a fantasy roster that play for the same NFL team. Incorporating stacks into your fantasy roster can be a way to bet on the combined offense of a particular NFL team or to maximize on the points you can get from a quarterback who excels at passing. The most common stack is to draft the quarterback and the wide receiver from the same team.

What are the best positions to stack in fantasy football?

There are a number of different position combinations that are good for stacking in fantasy football. One common strategy is to stack a wide receiver and a running back from the same team, allowing their performances to feed off of each other. Stacking two running backs from the same team is a second viable option, and a third strategy is to stack a quarterback and wide receiver from the same team, particularly in cases where the quarterback frequently passes to one of his receivers. Gaining both of these players could lead to large point windfalls.

Is stacking good in fantasy football?

Stacking can be a good strategy in fantasy football as you can get more fantasy points out of a combined group of players than their individual values would suggest. For example, a wide receiver that plays for the same NFL team as the quarterback that you just drafted may be available in a later draft round because their value is relatively low. If you draft that receiver, the added point bonus every time they make a reception can compensate for slightly lower individual production.