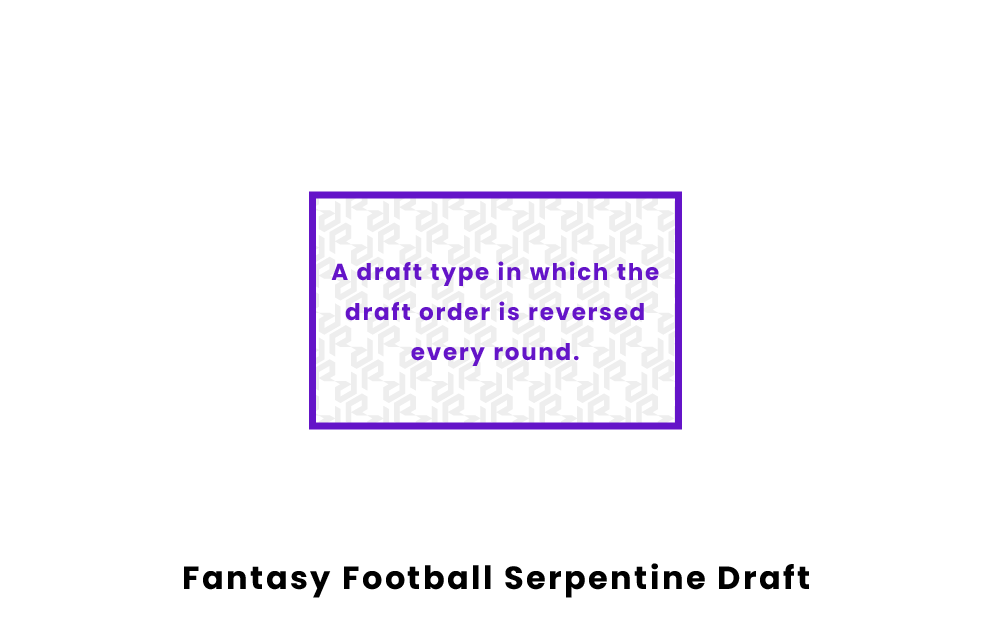 If you are getting into fantasy football, you have likely heard of a serpentine draft. The best-loved format for drafting fantasy teams, serpentine drafts are not as complicated as they sound. Keep reading to learn all about serpentine drafts, including rules and strategies.

Serpentine drafts, also commonly referred to as snake drafts, are the most popular method of drafting for fantasy football. They remain the gold standard for fairness and player enjoyment. Fantasy players can apply more complex strategies for maximizing picks in a serpentine draft than in a linear draft.

In a linear draft, a draft order is assigned randomly, and then the draft begins. The order will remain the same for every round of the draft. In a serpentine/snake draft, a random order is assigned, and the order is flipped every round. For example, if you draft first in the first round, you'll draft last in the second round and then first again in the third round.

There are plenty of draft strategies you can use in a serpentine draft, especially in a points-per-reception (PPR) league. The big question is whether to stack up on running backs or wide receivers, and this is dependent on both your draft pick and the current makeup of the league. If the league is deep in wide receivers, picking two receivers late in the first and early in the second is usually a good strategy. Picking at the back of the first round also gives you a chance to see what trends people are following with their picks and allows you to set your own draft trends in the even rounds.

Most people agree that the best place to pick in a serpentine/snake draft is the center of every round. This gives you the best collection and variety of talent. This is because you are not able to take two similarly-skilled players back-to-back as you would if you picked them at the beginning or end of rounds. Thus, picking in the center gives you the best variety of picks in order to craft your team. Others argue that the first position in the first round is the best position in a snake draft, as even though you will be drafting last in the even-numbered rounds, you will have the first pick in all the odd-numbered rounds.

A good question in snake drafts comes with selecting a quarterback. Taking quarterbacks or leaving them on the table can be risky business in this kind of draft due to the potential of long periods of time in between your picks. If a run on quarterbacks begins, with all of your fellow owners drafting their quarterbacks in one round, and you do not have a nearby pick, it may be a long night!

What is a serpentine draft?

What is the best fantasy draft position in a snake draft?

The best fantasy draft position in a snake draft is the one in the middle of the draft order. Thus if there are 10 teams in your snake draft fantasy league, the best draft position is fifth. Although picking earlier in the order may give you an edge in some rounds–and many managers prefer drafting first in a snake draft–drafting at the middle of the order provides the best balance between variety and level of available talent, maximizing your overall potential for generating fantasy points.

What is the difference between a serpentine draft and a fixed draft?

The difference between a serpentine draft and a fixed or linear draft is in the order each owner of a fantasy football team drafts players in each round. In a fixed draft, owners draft players in one order each round, with that order remaining the same (thus “fixed” in place) in every round. In a serpentine draft, meanwhile, the draft begins with one order of picks in the first round, and this order is then reversed in the second round, before reversing again in the third round, and so on. This reversal is called a “serpentine” or snake draft because it resembles how a snake moves back and forth.