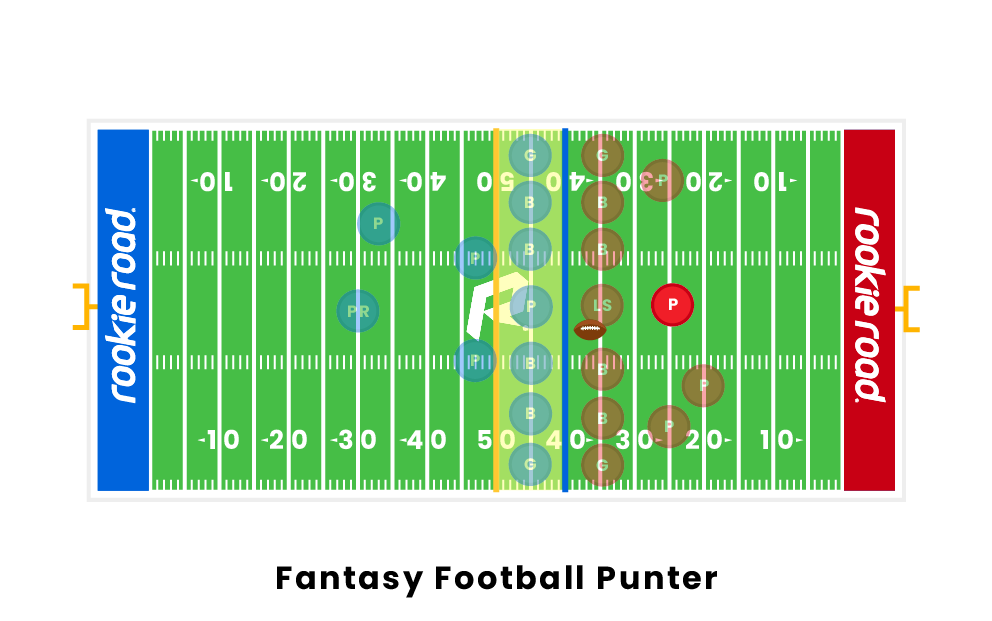 In football, the punter is the player that kicks the ball away to the opposing team when the offense fails to get a first down. While punter is generally not a position that is included in fantasy football, league commissioners can elect to change their league’s settings to include punters.

AYP = average yards per punt, which is the average distance traveled of the player’s total punts throughout the game.

Other options that can be customized include touchbacks, total punt yards, fair catches, return yard allowed, and number of punts.

Similar to kickers and defenses, punters do not usually have the same scoring ceiling as skill positions, which makes them less valuable. Since solid, consistent punters are much more common than reliable fantasy performers in skill positions (quarterback, running back, wide receiver, tight end), it is best to wait until the later rounds of the draft to select a punter.

Another important strategy when deciding which punter to draft is to examine the offense of the team the punter is a member of. The NFL’s best offenses tend to score touchdowns or field goals on most of their possessions, negating the need for a punt. Therefore, the best fantasy football punters tend to reside on teams that have difficulty gaining yards and find themselves frequently kicking the ball away to the opposing team. However, it is still important to consider the punter’s ability when making a draft decision.

Including the punter position can be a fun way to switch things up when it comes to fantasy football. Leagues often play together for years and thus look for unique ways to spice up new seasons. It also gives team owners who might not be adept at drafting other positions (i.e. running back, wide receiver) a chance to even the score. Including punters in fantasy leagues also adds excitement to an otherwise boring portion of real-life games, giving fantasy managers a reason to celebrate a strong punt.

Can you include punters in fantasy football rosters?

Yes, you can include punters as part of your fantasy football roster. You just need to ask your commissioner to edit the settings of the leagues to allow punters as a draft option. You can also change the scoring system for punters based on your own personal preferences. Make sure to change the settings before the draft as the roster makeup will lock once the draft commences.

Though they can be, punters are generally not included on fantasy football rosters. There is no singular reason for this, but it is most likely because punters are generally very consistent each week. Punters are typically always performing at the same level, so they would not provide a diverse amount of points for teams week-to-week. Including them is a niche option usually added to shake up a league’s options for competition.

How do I add punters to my fantasy football roster?

In order to add punters, your commissioner will have to go to your league’s settings and allow for punters to be drafted. The exact method of doing this varies based on the platform your league uses, but it is generally allowed on most sites. When adding punters to your league, the commissioner can also customize the points for the different statistical categories just like any other position.