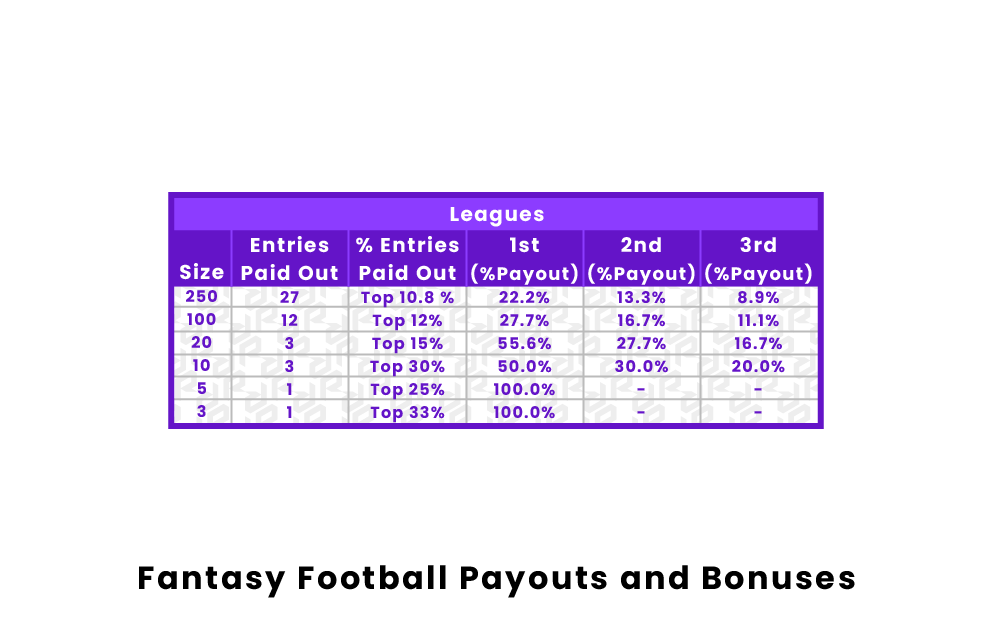 Payouts and bonuses are a major part of what makes fantasy football fun and rewarding: they are the prizes for your fantasy team’s hard work all season. Payouts are the method of awarding the main prize (they can happen weekly or at the end of the season), and bonuses are extra prizes awarded for wins in special categories, typically saved for season’s end. Keep reading to find out all about the most common types of fantasy football payouts and bonuses, and get some ideas for your next fantasy league.

Most fantasy leagues determine payouts at the beginning of the season, based on how many participants enter and the cost of the entrance or buy-in fee. Payouts are typically organized by how teams fare during the season, with higher-placing teams earning more money. For example, a team who placed first may receive 20 percent of the total buy-in, whereas last place may only receive five percent. Placing better earns you a higher payout!

Some leagues simply redistribute each team's buy-in back to them. In this case, the original buy-in was simply an incentive to continue playing in a league and refrain from dropping out, something like a security deposit placed on a house or apartment.

Other leagues, primarily contest leagues, only distribute a payout to a certain number of teams, such as the top five. These teams will split the total buy-in, raking in a large sum. Be careful when entering contests or leagues with large buy-ins and little chance of a payout, especially when there are already a lot of contestants.

Types of Payouts in Fantasy Football

There are various types of payouts in fantasy football, and league commissioners and team owners typically agree beforehand on which types of payouts they want to offer. The most important part of payouts is determining how much they will amount to and what they will be paid out for. Below, we have listed a few of the major achievements some leagues may offer payouts for at the end of a season:

Prizes are awarded to the top three finishers at the end of the postseason. This is the most traditional type of payout.

Prizes go to the top three finishers in points at the end of the regular season. The postseason is not considered.

The highest-scoring team gets a prize each week. The same team can win multiple weeks during the season.

Highest Weekly Score of the Season

Awarded at the end of the season for the highest score by a team in a single week.

In leagues broken into divisions or conferences, this structure is used to award prizes to the top finishers in each division or conference based on standings.

A highly competitive format in which the league champion after the playoffs takes the entire prize pool.

How to Set Payout Amounts

A commissioner may set payouts in any amount they like, but there are a few rules to follow in order to keep your managers happy and competitive. First prize should be the biggest amount, with second prize half the amount or less of first prize. Third prize should at least cover the entry fee. Payout amounts should be in even dollar amounts and, ideally, multiples of the entry fee.

Outside of payouts, some leagues employ a bonus payout system. These payouts are separate from the primary season payout, which occurs at the conclusion of the season. Unlike payouts, bonuses can be given out at any point in the season, serving as miniature prizes along the route to the final payout. They may be given for minor contests hosted throughout the season within the league, for exceptional play, or for the worst play. Some leagues may give bonuses to the team with the highest point total in a week or to the team with the worst record at the end of the season. Bonuses can be a fun way to keep team owners engaged and interested in the facilitation of the league. Check your league each week for potential bonus opportunities!

Types of Bonuses in Fantasy Football

Much like payouts, bonuses can take many forms and are awarded for a variety of smaller achievements over the course of a season. Bonuses can be awarded weekly, monthly, or at any other interval. Below, we list a few of the common types of bonuses in fantasy football:

This type of bonus is typically given out to the team with the highest-scoring set of benched players on a given week. It rewards the team who selected the best squad of bench players, even though those players do not often play in games.

The bonus is given to the team which had the highest number of overall points among those teams that did not make the playoffs in your league. It can be used as a consolation prize for an owner who had high-scoring players but may not have had enough key victories or points to reach the playoffs.

This bonus is given out at the end of the season to the team that scored the most overall points over the whole season. It is important to note that this may not automatically be the team who wins the playoffs.

This is a weekly bonus given to the team who accumulated the highest score in the set of games played that week.

This bonus is given out to the team that has the largest point margin victory of the season across all games played. It is also possible to award this bonus weekly, giving it to the team with the highest margin of victory each week.

Pity payouts are exactly what they sound like: bonuses that are given out to teams in order to console them for major blunders or losses. Pity payouts can take the form of money paid to the team who has the most points scored against them, either on a weekly or seasonal basis, or they can be a payout given to the team that finishes last in the league. They can also be given out for various other reasons, such as to the team with the most losses or the least points scored each week.

“Skins” is one of the more interesting bonus structures in fantasy football. In order to play skins, a bonus of a predetermined amount is given out each week to whichever team scores at least 10 points more than every other team in the league. If no one manages to outscore their fellow teams by 10 points during a given week, the bonus that could have been awarded that week rolls over into the next week, and so on until somebody achieves the feat, whereupon that team receives all of the accumulated bonuses, and the payout resets once again to the starting amount. Skins can be a great way to add excitement to a league, as it allows for certain payouts to be very large.

A streak bonus is very simple, as can be deduced by its name. It is given out at the end of the season to the team that had the longest consecutive streak of victories during the season.

Another interesting bonus structure, the survivor bonus is a bonus given out at the end of a season based upon weekly point totals. At the start of the season, every team is eligible for this bonus, but each week, the team with the lowest number of points in that week is eliminated from contention until there is only one team remaining. That team then wins the survivor bonus. This bonus can be a great way to reward teams not by victories or points but by simply avoiding being the lowest scorer each week.

How to Set Up Bonuses

As with payouts, there are a number of considerations to take into account when setting up bonuses. Commissioners want to make sure that they are generous with bonuses, but it’s often not a great idea to go crazy with them. Bonuses should feel like attainable but challenging rewards, not given away too easily but also not impossible to receive. Additionally, commissioners must take into account the funding their league has available. Bonuses will be affected by how much the entry fees and buy-ins of your league amount to, so it is important to set your major payouts first and then determine how much money you have left for bonuses, and how it can best be distributed.

What are some fantasy football payout ideas?

There are plenty of great ideas out there for payouts to keep your fantasy league exciting. The most common payouts give prizes to the top three teams in terms of standings at the end of the regular season or postseason. More interesting payout ideas include highest weekly points, highest weekly score of the season, division or conference winners, winner takes all, biggest blowout, and longest win streak.

What makes for the best fantasy football payouts?

The best fantasy football payouts keep managers competitive through the end of the season. A standard payout based on standings at season’s end may fail to motivate those fantasy owners who fall behind early. While it is important to reward the league champion, consider payouts to the team with the highest score every week or the highest total score over a season. Payouts like these can help inspire managers with losing records and keep the league more competitive.

Where can I find the best fantasy football payouts?

The best fantasy football payouts, relative to the entry fee, are awarded by online fantasy sites that run massive fantasy tournaments. Because of the number of entrants in a single league, the payout can be much larger than in a traditional fantasy league. Underdog Fantasy has one of the highest payouts compared to its entry fee. Large payouts are also awarded by online high-stakes money leagues offered by sites like Data Force, RT Fantasy, and Apex Leagues.