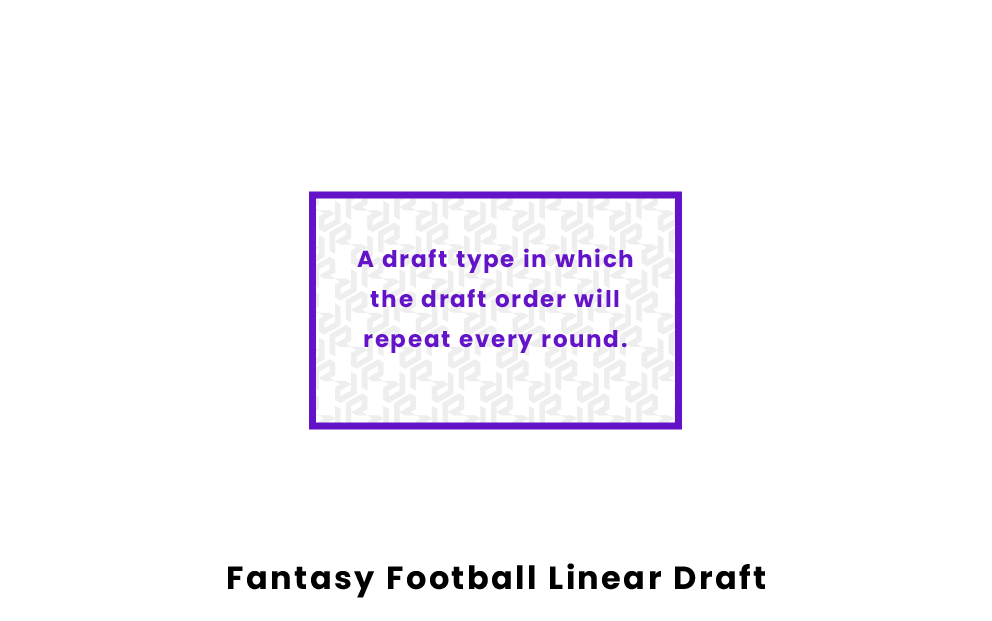 One of the most important aspects of fantasy football is drafting players for your team. In order to facilitate drafting and assembling teams in a fantasy league, there are various methods a league commissioner can use. One of these methods, the linear draft, is known for its regularity in the rotation of draft picks. This form of drafting comes with various perks and drawbacks, which we will discuss below. Read on to learn more about linear drafts in fantasy football!

What is a Linear Draft?

A linear draft is a draft type in fantasy football in which the draft order repeats in the same format every round. Under this system, the draft order is consistent and regulated so that the team owner who picks first in the first round will pick first in every subsequent round. Following this method, the team picking second in the first round will pick second in the following rounds, the team that was third will pick third in the remaining rounds, and so on.

In a linear draft system, the draft order is decided by the league commissioner prior to the first round, and the order can be decided randomly or based on the win-loss records of the league’s teams the previous season (if there was one). With ordering based on records, the team with the worst record receives the number one overall draft pick, as in the actual NFL Draft.

Linear Draft Compared to Other Variations of Fantasy Drafts

Linear drafts stand out from other forms of fantasy drafts because of the regularity of their draft order, which is an unusual method of drafting players. The rigidness of the draft order, as well as the advantages it gives to the first pick, makes it a unique draft format option. As a result of the order being consistent across rounds, the person who has the first pick is at a significant advantage, as they get to pick from the largest pool of players in each round, thus meaning that they will often get the best players.

Linear drafts are the least used of the three main types of fantasy drafts. Both snake drafts and auction drafts are chosen and played more often. The primary reason for this is that linear drafts give certain teams a clear advantage.

Linear drafts have a few notable benefits for fantasy football players, namely in how they can be used to balance a league and give certain teams a distinct advantage. A linear draft allows teams that were bad the previous season to improve by giving them the early picks in the draft, which will enable them to draft better players. In keeper leagues, the implementation of a linear draft with the order decided by win-loss record could level the playing field for teams that did poorly the previous year.

While there are benefits to linear drafts, this style of drafting does come with certain drawbacks. For one, linear drafts are often considered to be unfair. In a linear draft, having a higher draft pick gives a distinct advantage over teams with lower picks. Not only do you have a higher pick in round one, but in every round following as well. Because of this, it becomes easier for teams that are early in the drafting order (especially the first team on the list) to stack their teams with good players, which may disadvantage other teams.

In addition to linear drafts, other types of drafts in fantasy football include:

What is the difference between snake drafts and linear drafts?

What is a linear draft?

A linear draft is a type of fantasy draft in which the order of teams drafting stays the same every round. This makes a linear draft the fantasy football format that most resembles how teams draft in the real-life NFL. However, a linear draft can be considered less fair than a snake draft, as teams with early draft positions are given an advantage in every round.

What is linear draft order in fantasy football?