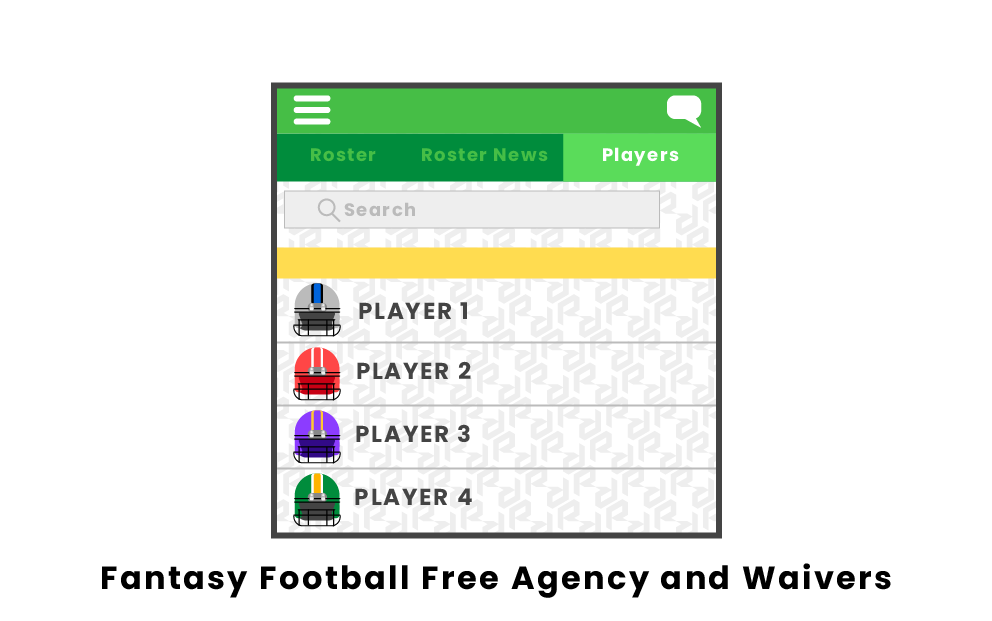 In fantasy football, much like real football, games, standings, and playoff determinations can be influenced by the free agency of players in the fantasy league. In most fantasy leagues, you can claim certain players who are not on another team (known as free agents) for your fantasy team. These methods are called waivers. Read on to learn all about waivers and how they work!

What is a Waiver?

Waivers in fantasy football are a type of claim owners can make on undrafted players who are free agents. In many fantasy leagues, there is a group of players known as the waiver wire. The waiver wire is a pool of free agents available to add to your team. If one of the players on the waiver wire catches your eye, you can claim that player in the free agent pool. Whenever waivers are processed (this is usually at the beginning of each respective week in the fantasy football season), that player will then be added to your team.

Once another team in your league drops a player, they automatically go onto waivers before becoming a free agent. If more than one owner makes a claim on a player, the team with the highest priority will receive the player when the transaction is processed. Most leagues have a system in which the more acquisitions you make, the lower your priority is in claiming future players.

Waiver claims are a way for fantasy owners to express a desire to draft a free agent to their team. As soon as the waiver wire opens, typically on Tuesday morning, owners may make waiver claims to fill any open roster slots. If a manager’s roster is full, they will have to drop a player to make room for their new waiver claim.

Sometimes, when certain players are on the waiver wire, they may be claimed or requested by multiple teams through waivers. In these cases, there are protocols that exist to determine which team will receive the disputed player. In a fantasy league that uses waivers, each team typically has a “waiver position,” which is their relative power over other teams in the league when using waivers. These positions are typically ranked, with teams that have the highest priority and power being ranked number one and the rest of the teams following afterward, through number 10, the lowest ranking.

Waiver positions are often assigned based on that fantasy team’s win/loss record, with the winningest teams ranked the lowest. Thus, poorly-performing teams have priority in the interest of giving those teams a better chance at fair competition.

When two teams both claim the same player through waivers, the decision of which team the player will go to depends upon their waiver position. For example, if the teams with waiver positions four and five both claim a player, the team in the fourth position will receive that player. Afterward, the team in the fourth position will be moved down to the lowest waiver priority (10), and the other teams will all move up a slot.

If you play fantasy football, you may occasionally hear the term “waiver hawk” used to describe a team owner in your league. Waiver hawks are team owners who are constantly adding players to their team via the waiver wire. These owners constantly shuffle their rosters week-to-week, dropping underperforming players for free agents who have done well in the previous week. This strategy can have some potential benefits, as observant selections of free agents can result in your team constantly getting a boost from fresh, high-performing players that other teams are too cautious to draft.

However, being a waiver hawk is considered a very risky strategy in fantasy football, as the strategy could backfire, resulting in your team ending up with weaker players than those you may have started with, should you choose your free agents poorly. Since every use of a waiver claim in fantasy football forces you to drop a player from your team if your roster is full, claiming a player on the waiver wire who has suddenly begun to perform well means that you run the risk of losing a solid player. This could result in claiming a free agent who performed well in the previous week but may be unable to maintain that performance in the long run.

Free agency is a system in which players who are currently not on a team are available to acquire, assuming that all of the roster spots on the team are not full. It's a valuable asset when trying to improve your team after an injury or a weak performance from a player, or maybe to fill a starting spot during a bye week.

A crucial part of adding free agents is looking at their current matchup. Since many free agents are just replacement players, it is important to consider whether they have the optimal chance to perform while on your roster.

It is important to note that free agency in fantasy football is different from free agency in the NFL. In fantasy football, free agents are players who do currently play for the NFL in real life but have simply not been drafted by a fantasy team in your league. Actual free agents in the real-life NFL would not be eligible to be drafted by fantasy teams as they have not yet signed with a team. Once they sign with a team, they can become fantasy players and either be drafted by a fantasy team in your league or placed on the waiver wire.

How do waivers work in fantasy football?

In fantasy football, waivers work by awarding undrafted players to the teams that want to claim them. If more than one owner claims the same player on the waiver wire, then the fantasy league will automatically choose which team gets the player based on the waiver order. Typically, a player that is claimed is awarded to the team with the worst record, but other systems for settling multiple claims on a player exist.

What are waiver claims in fantasy football?

Waiver claims in fantasy football are bids to claim an undrafted player to a team.  Depending on the rules of the fantasy league, waiver claims may be made at certain times throughout the week, with rosters typically locked between kickoff and Tuesday morning. Throughout the season, players are added to the undrafted pool as they get dropped from teams. Waiver claims allow other owners to add those now-available players to their teams.

How does the waiver wire work in fantasy football?

In fantasy football, the waiver wire is another name for the pool of players who have not been drafted by a fantasy team at the start of a particular week. These players are considered “free agents,” and when they are part of the waiver wire, team owners can make a claim for them if they are available at the start of a week. If the claim is accepted, the team owner will gain the claimed player but will be forced to drop another player from their team.  The dropped player is then added to the waiver wire and can be claimed by another team in the league.