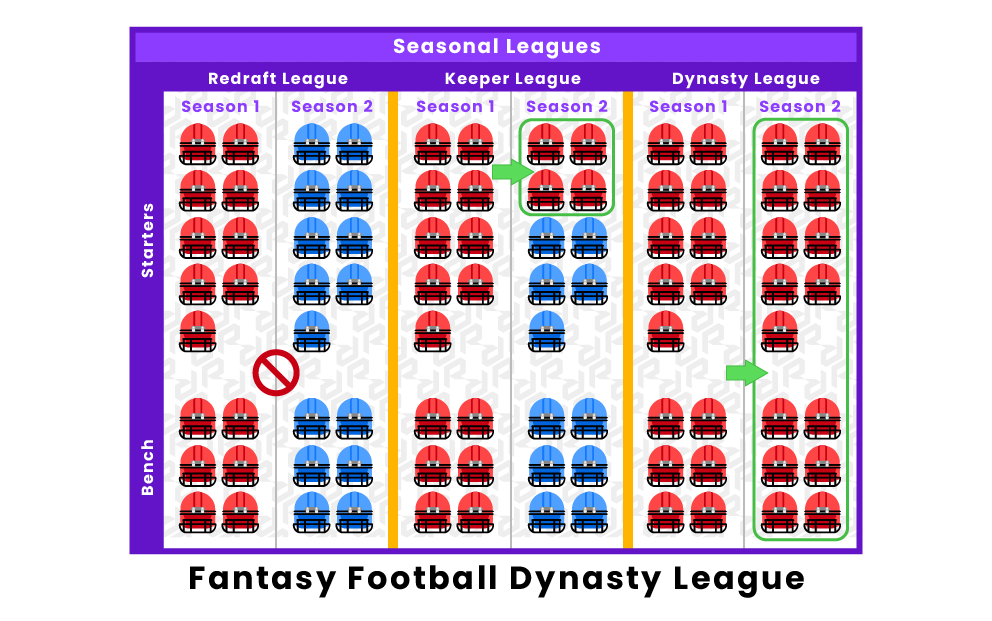 What is a Dynasty League in Fantasy Football?

Also known as a keeper league, a dynasty league is a type of fantasy football league in which team owners keep most or all of their players from year to year. This differs greatly from how a standard or “redraft” league operates, where everyone drafts a completely new team at the beginning of each season. Dynasty leagues are not quite as common as redraft leagues, as they require stable groups of competitors who are committed to renewing their teams and keeping an eye on them over the course of years. However, dynasty leagues can be a popular way to involve a small, enthusiastic group of friends in a years-long activity, using the unique excitement of fantasy football to foster a love of the game and a stronger ability to predict and understand the patterns of football.

To begin a dynasty league, an initial draft and the creation of certain ground rules are necessary. Not all dynasty leagues are the same, as some are driven by a complete sense of ownership (meaning you retain every player on your roster), while others are closer to a keeper league (in which only a core group of players are kept). Many dynasty leagues feature individual defensive players rather than a team defense to challenge team owners even more. Read on to learn more about the scoring rules and other procedures in dynasty leagues.

Dynasty leagues can employ various types of fantasy football scoring, but most leagues prefer some sort of points-per-reception (PPR) scoring.  As opposed to standard scoring, PPR scoring gives additional points to receivers and other offensive linemen based on their number of ball receptions. Most dynasty leagues utilize either a half-PPR or full-PPR scoring system, but very few utilize standard scoring. This, as we will see below, is because dynasty league rosters tend to be very high in key offensive players, meaning that a PPR scoring system will increase the point values of each player exponentially.

While this may seem counterintuitive to some, the reason dynasty leagues often have more high-ranking starting players is that they are very reliant upon trades. Trading frequently occurs during dynasty league seasons, and thus, a team without a number of strong starters will have lesser trading value.

There are numerous ways to deal with free agency in dynasty leagues, but the most common and similar to that of operating an NFL franchise is to assign each team a certain amount of dollars for the season and participate in a blind bidding system. This means that every week, an owner can bid any amount of money on a player they would like to pick up, and whoever bids the most wins. The catch is that once you run out of money, you are unable to pick up any more players for the season.

At the beginning of every season, dynasty leagues will hold a miniature draft to add rookies and free agents onto their rosters. This draft can be together or separate for each grouping of players.

How Many Players Do You Get to Keep in a Dynasty League?

The mindset of owners in a dynasty league is what sets the type of play apart. Each franchise must think about its future just as much as its present, since one wrong decision now can lead to years of misery. Trades are much more common in dynasty leagues, and teams will often trade draft picks if they want to acquire talent now rather than later. Age and health are also more important factors in dynasty leagues since retirement and injuries can be huge blows to a roster. Below are some common dynasty league strategies and tactics that team owners should keep in mind when joining and playing in a dynasty league.

In dynasty leagues, the most important thing is to draft players for their value rather than their position. In dynasty leagues, trades are paramount, so having many valuable players is more important than filling every position on a roster. Acquiring valuable players will increase your trading capabilities, allowing you to seek out trades for better players throughout the season.

One major strategy in dynasty leagues is to build a roster of young players whom the team owner believes will improve greatly in a year or two, creating a powerhouse team. However, another popular strategy is the “win-now” strategy, which involves drafting numerous players who are well-performing already, as this has the potential to bring about a dominant season. Having many wins in an inaugural season can allow a team owner to have excellent drafting and trading influence in upcoming seasons. Owners who utilize a win-now strategy will often draft stars for their first two positions and then fill the rest of their roster with proven veterans.

The opposite of a win-now strategy, the young core roster emphasizes a dynasty league owner stacking their team with young rookie players whom they believe will grow in skill and performance in the coming years. This strategy can have huge benefits as if you choose wisely, and all of your rookies excel in the following years you will have a powerhouse team. However, poor choices can lead to a mixed or ill-performing team that impacts your future seasons.

Another dynasty league roster strategy is the one-quarterback roster, which involves an owner drafting only one quarterback later in the draft rounds, saving their first picks for impressive receivers and running backs. This strategy may not result in a star quarterback pick, but because dynasty leagues often use PPR scoring, having many valuable receivers can make up for the lack of a hard-hitting quarterback.

The opposite of the one-quarterback roster, the superflex roster is one where a dynasty league gives its owners an extra roster slot, which is often used for a second quarterback. This can often lead to a number of high-ranking quarterbacks being drafted early, so if a team owner is part of a superflex league, it is important not to employ the one-quarterback strategy, as this will often result in quarterback options being snapped up quickly, leaving the owner with few options.

The benefits of a dynasty league are that managers get to keep their best-performing players from year to year and that rosters are much larger than in typical leagues. For fantasy fans who want a more consistent, realistic experience, like those of an actual NFL team, a dynasty league may offer a more comprehensive and vivid simulation of being a team owner or coach. Keeping players from year to year allows team owners to cultivate relationships with them and capitalize on their growth in the league. The larger rosters used in dynasty leagues allow managers to keep more high-performing position players, maximizing fantasy points and reducing the need to make difficult roster cuts.

The primary drawbacks of dynasty leagues are that you can get stuck with underperforming players and that they can be less convenient to leave than other leagues. One of the advantages of dynasty leagues is that you get to keep a few players that have been performing well for you. But what if you drafted poorly last season or had bad luck? Dynasty leagues can make the requirement of retaining players seem like a burden if you wish for a fresh start in the draft.

Although it is not a major drawback, some dynasty leagues can be more difficult to leave than those of other formats. Since the same managers are expected to return every year, those who want to leave often must find a replacement to “sell” their team to. Selling merely involves getting a new manager to agree to take over the team and yearly prize pool fee, but this is more work than leaving a redraft league.

A final drawback of dynasty leagues is an extremely quiet waiver wire. As a result of the larger rosters used in dynasty leagues, managers feel less incentive or pressure to drop players, as they rarely need to free up space. If you are a fantasy player who loves to work the waiver wire all season, dynasty leagues may not be for you.

Differences Between Dynasty Leagues and Other Leagues

Most other types of fantasy leagues last only one season or at least go through a significant turnover of managers between seasons. The defining feature of dynasty leagues is that players may be retained from one season to the next, so they necessarily last several years. As a result, dynasty managers are expected to stay in the league for several years and find a replacement if they wish to leave. Dynasty leagues offer several extra roster slots as compared to other types of leagues. Most leagues cap rosters at 18 players; dynasty leagues often allow as many as 30 players on a roster.

How do dynasty leagues work in fantasy football?

Dynasty leagues work in fantasy football by allowing managers to keep some or all of their players from one season to the next. The number of players that owners may retain varies according to the rules of the league, but typically all members of the league are permitted to keep the same number of players. Dynasty leagues compete year after year, with the same pool of teams and fantasy managers, unless a manager wishes to leave the league.

How long do dynasty leagues last?

Dynasty leagues last as long as the fantasy managers want them to, potentially indefinitely. The entire point of a dynasty league, also known as a keeper league, is to keep players for the next season, so the league must last for at least two seasons. Fantasy dynasty owners pay a fee at the beginning of each season, which forms the prize pool. If a manager wishes to leave the league, they simply find a replacement who takes over ownership of their fantasy team, paying the fee in their place. In this manner, a well-managed dynasty league can last as long as you like!

When should you draft a quarterback in a dynasty league?