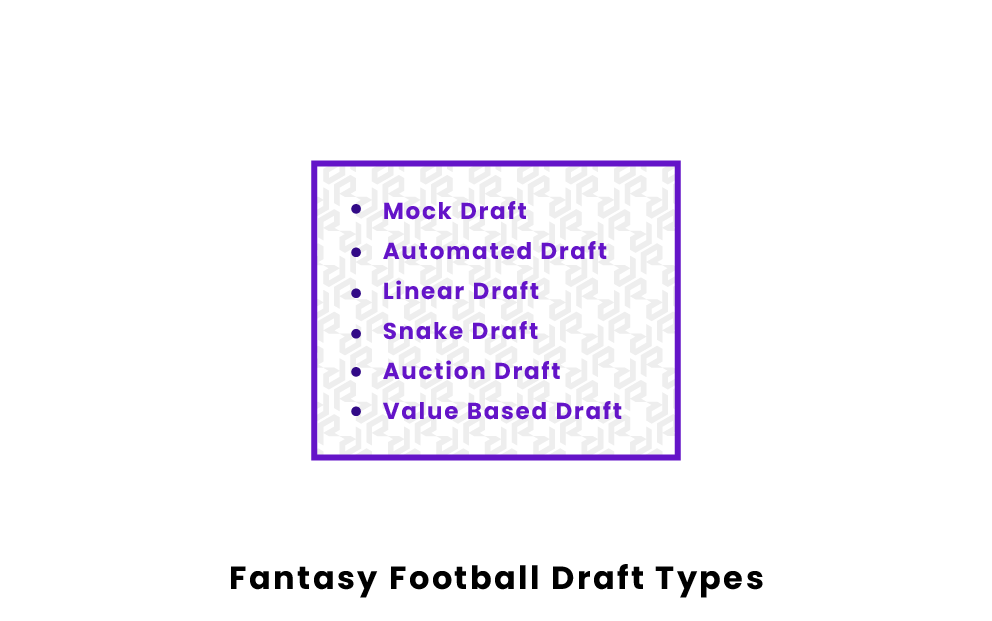 There are many different draft types that fantasy players can use. There is no right or wrong, it is all up to the player’s discretion. Common types of fantasy football drafts and strategies include:

A mock draft is not a real draft. Think of it as more of a practice draft for players to get an idea of which players are going where. Players typically use mock drafts in order to develop strategies for when the real draft happens. It can also be a helpful way to familiarize fantasy football beginners with the process.

An automated or autopick draft is where the player cannot control the pick. Instead, each pick is automated and takes the best player available as decided by the database beforehand. Players will either be picked based on the rankings list provided by the league site or from a manually compiled rankings list made by a team owner.

A linear or straight draft is a draft that works very similar to how the real NFL draft works. There is a set order that is followed in each round of the draft. So if you pick first in the first round, you will pick first in every other round. In the NFL, when teams are operating with actual people and parity is sought after by the commissioner, having a straight draft makes sense. However, in fantasy football, the linear draft is rarely used.

The snake or serpentine draft is the most common draft in fantasy football. The snake draft works by mirroring the first two rounds and continuing from there. For example, in a 10 person draft, the person who picks first will also pick 20th and 21st. The person who picks fifth will pick 16th, 25th, and so on. This gives players picking at the end of odd rounds a chance to compete as they can get the top players of the even rounds. Because of this fairness, the snake draft is extremely popular.

Auction drafts, also known as salary cap drafts, work very similarly to real life auctions. Teams are given a set amount of money to work with, usually $200. This $200 is the money you have to make up your whole roster. Instead of “picking” a player with each draft pick, players will choose to “nominate” a player. Teams will then take turns “bidding” on the player, with the owner who bids the most money receiving that player. There is plenty of strategy as blowing your money early on a few good players would hurt your chances of getting solid contributors later on in the draft. While confusing, auction drafts can be fun particularly for experienced players.

What is a snake draft in fantasy football?

What is a linear draft in fantasy football?

A linear draft, also known as a straight draft, is a type of fantasy football draft in which a set order is followed for each round of the draft. For example, if you pick second in the first round, you will pick second for every other round. Though they are rarely used in fantasy football, linear drafts are the closest type to how the NFL draft actually works, with the commissioner deciding the set order for each round.

What is an auction draft in fantasy football?

An auction draft in fantasy football is a unique type of draft in which owners “bid” on players instead of drafting them outright. Each owner has a set amount of money to use in the draft, usually $200. During the draft, each owner gets a chance to “nominate” one player per round. Once the owner nominates that player, all owners in the league are able to “bid” a certain amount of their allotted money on a player. The highest bidding owner receives the player on their roster. This process continues until each owner has completely filled out their team with players. An auction draft is also known as a salary cap draft.