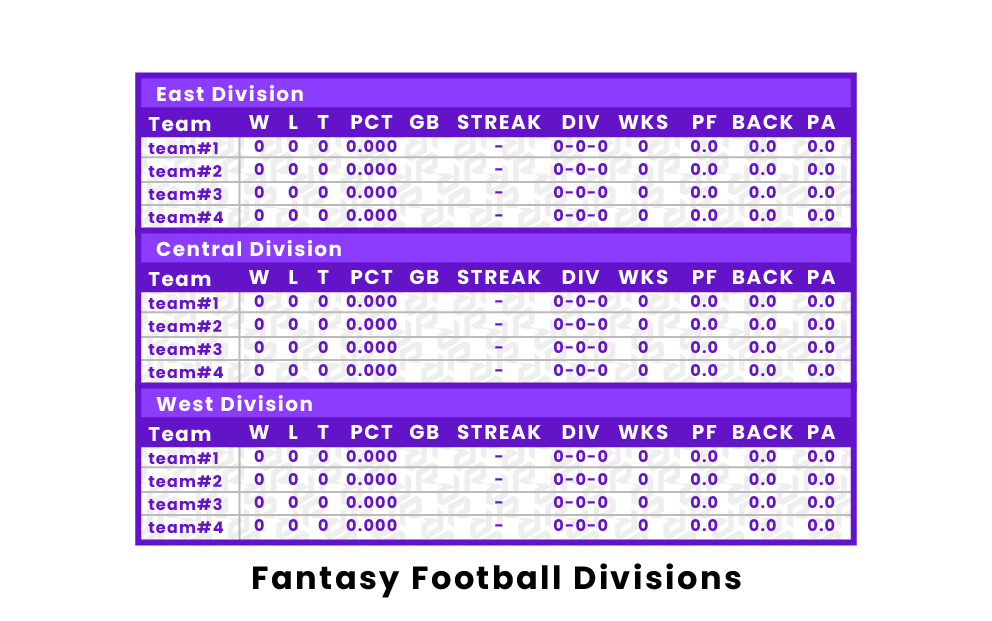 Not every league has divisions in fantasy football, but for leagues that do have divisions, many people often wonder about their purpose. The simple answer is that divisions provide an easy way to organize teams, as well as to determine who is going to make the playoffs. Most deep leagues (leagues of more than 12 owners) are divided into at least two divisions. The only requirement is that there are at least two teams in each division to allow for competition.

So, instead of having to take into consideration the outcome of every game for every team in a given week to find out if you will make the playoffs, you only need to look at the shortlist (teams in your division), and it's easy to spot which position you need to be in to make the playoffs.

How Leagues are Broken Up

Most leagues separate teams into divisions randomly when an owner first joins the league. Online sites will do that for you, and that is typically the default setting. However, league settings can be altered to pick divisions. This is most common in dynasty leagues that run for more than one year.

In dynasty leagues, there can be set divisions as well as divisions chosen by previous year’s records. Divisions can remain constant the same way real football divisions do, meaning that you will have the same divisional opponents every year. The divisions can also be chosen based on the previous year’s win-loss records, evening the league by balancing the skill levels in each division.

What are the fantasy football division names?

By default, fantasy football division names are given generic names, usually East, West, North, and South. However, picking zany names for your division is just as fun as coming up with a clever handle for your fantasy team. Fun-minded commissioners choose interesting names for their divisions, which match the style and sense of humor of their league. To change your division names, click on the “Edit Teams and Divisions” tab of the League Manager menu on your fantasy page.

Do divisions matter in fantasy football?

Divisions absolutely matter in fantasy football whenever they are used as part of a league. Like real-life football divisions, fantasy football divisions are key factors in setting up playoff matches. The way in which a fantasy team performs against its divisional opponents will determine its seed in the playoffs, or whether a team even reaches the playoffs in their league. While not all fantasy leagues use divisions, when they do, it is important for all team owners to track their performance in their divisions.

What is a fantasy football division randomizer?

A fantasy football division randomizer is a tool used to place each of the teams in a fantasy league into fair, truly random divisions. Although fantasy leagues offer automatic random draft options for absentee managers, the commissioner must manually assign divisions in most cases. A simple random number generator is an easy way to randomize your league. Specific online football division randomizers are also available, such as the one at 100 Yard Rush. These websites allow you to enter the names of all your teams and the number of divisions. Then they randomly place the teams into divisions for you.