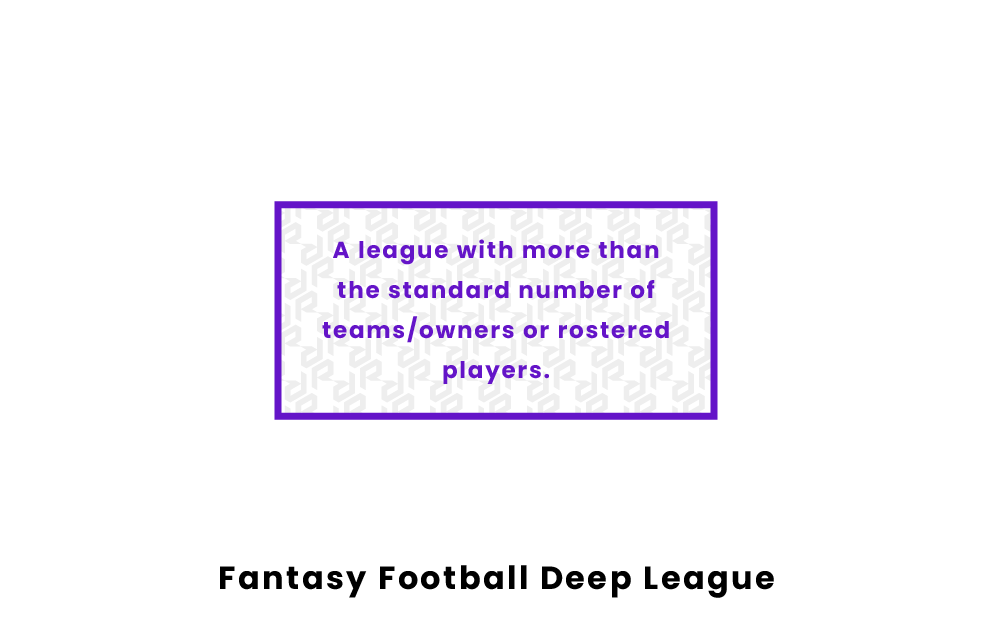 What is a Deep League in Fantasy Football?

Deep league draft strategies are much different than standard leagues. In standard leagues, the goal is to draft steady players that consistently contribute to the team’s overall score each week. Due to the additional number of teams in deep leagues, there tend to be less steady contributors available. Thus, managers must turn their focus to “boom or bust” players. The term “boom or bust” refers to highly volatile players that can either erupt for 20 points or provide little to no scoring. Finding success in a deep league often comes down to finding hidden value in players that are not reliable starters but have the potential to excel in the right matchups.

Drafting “handcuffs” is also crucial in order to achieve success in a deep league. Handcuffs are players that are currently real-life backups, but are likely to slide into a starting role should the regular starter sustain an injury or underperform. Finding talented players that simply haven’t had a chance in the spotlight requires an extensive amount of research and good fortune, but can ultimately pay off in a big way.

In addition to having more teams, deep leagues also have expanded roster slots, usually 18 or more spots. For example, whereas a standard league typically requires the owner to start only one quarterback each week, deep leagues often have two quarterback slots in the starting lineup.

In a deep league, the number of players fantasy managers are permitted to carry on their bench is also often increased, giving fantasy owners a chance to stash several players in hopes that one will have a breakthrough season. An increased number on one’s roster means a more thoughtful drafting and trading strategy is necessary, especially with a close attention to sleeper talent.

Deep leagues are generally much more challenging than standard leagues, due to the increased number of fantasy managers vying for the same players. It is for this reason that deep leagues are mostly occupied by experienced fantasy football players that are willing to invest extra time and effort in managing their teams.

What is a deep league in fantasy football?

What strategy is best for a deep league in fantasy football?

In fantasy football, the best strategy for a deep league is to be extremely calculating when drafting. Having a great roster is key to success in any fantasy football league, but that becomes much more difficult to accomplish in a deep league. With so many managers vying for their favorite players, you must research thoroughly so that you are aware of sleeper talent and can thoroughly think through how and why you choose handcuffs.