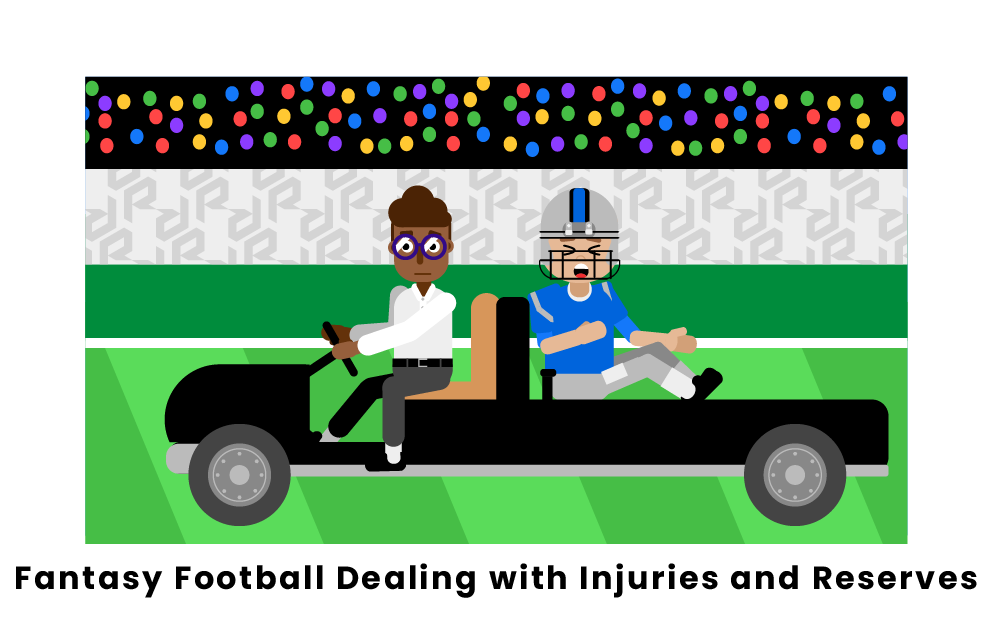 Managing your roster is one of the most important jobs of being a fantasy football manager. To be effective at this, you have to know how to handle players that get injured during the season. Did you have an important player injured at a pivotal point in the season? Don't worry! There are plenty of things you can do to make up for the loss of production and keep your team in the playoff hunt.

Injured players cannot score points for your team while they’re injured. This means they are taking up a valuable spot on your roster that could be earning you points. When you have an injured player on your team, there are three main options:

One thing you could do is trade the injured player to another team. Of course, that player loses some value being injured, but depending on how good they are, you still may be able to get a good deal. If the player is set to come back very late in the year, it may be hard to decide whether to trade them or not. The question you must answer is: can you win games without them until they come back? If so, you may want to hold onto the player to make a strong playoff run in the future. Trades can only be made before the league’s designated trade deadline.

If you can't win games without them, how important is the championship to you this season? If you’re playing in a keepers league, and the player won't be back until next season, consider holding onto them for a strong return next season. If they are often injured, trading them for solid depth isn't a bad option.

If the player is available to drop, consider using the waiver wire to replace them. You most likely won't get as many points from the replacement, but some points are better than no points when trying to win games. However, if the player is on the “undroppable players list,” you're stuck with trying to trade them off to someone else.

Before going through this process, note the state of the injury. Are they out for the season? Are they coming back in three weeks? These are important things to know. Make sure to pick up a player that plays the same position and, ideally, scores a similar amount of points.

Keeping an injured player is often the least enticing option, but it can sometimes be the wisest choice for the success of your roster. For example, if it’s week 2 of the regular season, and he’s only projected to be out for 3-4 weeks, it makes the most sense to hold on to the injured player if he produces a lot of points. Some fantasy football leagues even give teams the option to place injured players on an injured reserve (IR), which allows the team to keep that player and temporarily free up a roster spot to add someone who is not injured. Remember that you’ll have to drop the replacement once the injured player is healthy.

In the event that the player cannot be placed on the IR, but the injury is still short-term, you can simply keep the player on your bench. While this strategy may hurt the team a little because you are keeping a player that cannot provide points for the weeks that he is injured, you can plug him right back into the lineup without issue when he returns. Fantasy football is ultimately about an entire season, so taking a short-term loss can mean long-term success if you are patient.

How does the injured reserve work in fantasy football?

The injured reserve (IR) is a space on a team’s roster where injured players may be temporarily placed. If your league allows for injured reserves on their rosters, team owners can place injured players on the IR and add replacement players to the active roster until the ones they replaced are healthy enough to play again. Not all leagues have an IR, so it’s important to ask your commissioner about one before the season starts.

What do you do with an injured player in fantasy football?

If one of your players becomes injured, you can either trade him, keep him, or use the waiver wire. What you should do heavily depends on how injured he is. If the player will likely be healed in a few weeks and it is early enough in the season, it is advisable to keep a player until they are better. If it is too late or the injury seems long-term, you should consider trading with another team or using the waiver wire to add a replacement.

Can you trade an injured player in fantasy football?

Yes, you can trade an injured player in fantasy football. If the injury incurred seems long-term, this is often the best course of action for a team’s overall success. The main downside to this option is that injured players have significantly less value, so the chances of using them for a good deal are not likely. If the player being traded is out for most or all of the season, a bad deal is better than no deal.

Pages Related to Fantasy Football Dealing With Injuries And Reserves