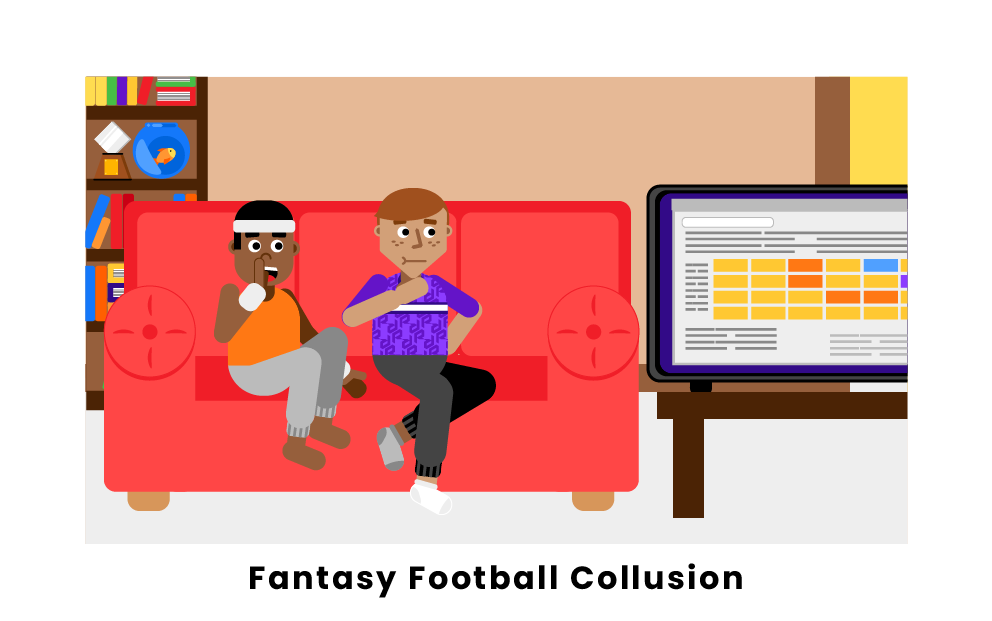 What is Collusion in Fantasy Football?

Collusion is a phrase that describes a situation where two or more owners in the same league work together to get an advantage over other participants. Collusion is an unfair strategy in fantasy football, and usually results in both players being kicked out of the league. Read on to learn more about collusion, examples of collusion, why it happens, and the typical punishment.

There are different ways in which members of a fantasy football league can conspire together to gain an advantage. It is important to note that each of the listed ways are frowned upon and are considered cheating.

The most common form of collusion is through trades. Owner A sends a consensus top five player in the league to owner B in return for a player who doesn’t even start for a team. The trade is clearly unbalanced and is done so with the intent to work together to better one team.

With enough people colluding, fantasy football league rules that are proposed and even accepted can be unfair for the rest of the league.

An example would be voting to increase the amount of points a quarterback gets, in order to help out a league member who has very good fantasy quarterbacks.

Why does Collusion Happen?

Collusion can happen for a variety of reasons. It could be two friends that are in a league together. There could be an agreement between two owners that the favor would be repaid in the future. A lot of the time, one owner is already eliminated from making the playoffs and another who is right on the cusp of the playoffs convinces them to help. However, the one constant is that collusion is always done with the intent to unfairly give someone an advantage.

As with every rule in fantasy football, it varies from league to league. In leagues that are for money the punishment may be more severe than a free one. League managers may decide to rescind a championship or even kick those who committed the offense out of the league.

What is collusion in fantasy football?

In fantasy football, collusion is when two or more team owners work together to have advantage over other team owners. Collusion is against the rules of the vast majority of leagues because it is the easiest way for fantasy football owners to cheat. Collusion can be as simple as giving insider info about trades and be as severe as one team owner purposely losing a game so that another owner can win and advance in the league.

What are some examples of collusion in fantasy football?

The most common examples of collusion are lopsided trades and thrown games. Trades are considered collusion when one team owner trades a very valuable player for a player that has little value with full knowledge of how unequal the trade is. Thrown games are when team owners purposefully lose a game so that another team owner advances further into the league.

What is the punishment for collusion?

The most common punishment for collusion is expulsion from the league. As with all other rule infractions, collusion is ultimately called and judged by the league’s commissioner. In most cases, the commissioner will kick out all team owners involved in the collusion. If the collusion resulted in the win of a championship game, that win can be revoked as well.