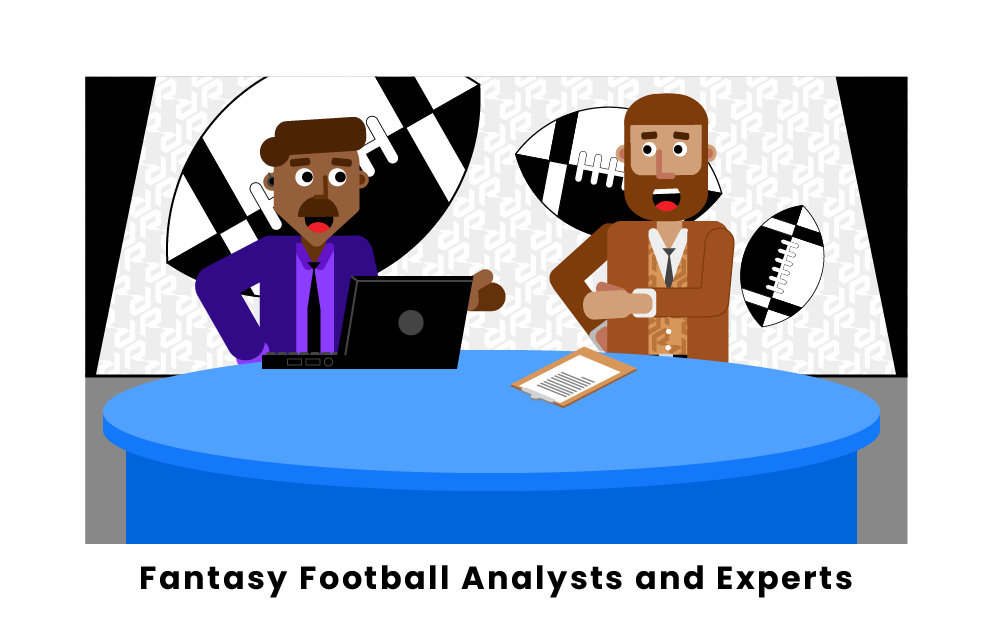 Fantasy football players are constantly doing research in order to maximize their success. Whether it is by reading daily rankings or watching fantasy shows, owners learn to trust the experts who help them win.

Experts do everything from predicting who to draft to giving out advice on which players to start or sit for a given week. While some websites evaluate the accuracy of each expert, most analysts do not have major consequences for one wrong decision since they make so many predictions throughout every season. Listed below are six of the best fantasy football analysts in the game.

Who are the most popular fantasy football analysts?

Berry is credited for helping fantasy football grow from a niche game into a national pastime. He was the face of ESPN Fantasy Football and helped grow them into what they are today. Berry hosted one of the company’s most successful podcasts, “The Fantasy Focus Football.” Now at NBC, Berry still makes time to give out his predictions and picks, consistently being one of the most popular human resources in fantasy football.

Paulsen is a fantasy analyst for the website 4for4.com, a website dedicated to fantasy football. He also hosts The Most Accurate Podcast (TMAP), a weekly podcast in which he sums up the fantasy football week and makes his predictions for the upcoming games.

Koerner is one of the most highly respected analysts at The Action Network, a network dedicated to fantasy football and sports betting. He is referred to as 'the oddsmaker' and has been involved in fantasy analysis for years.

For over 20 years, Koerner has worked in predictive analytics for the NFL, Action Network, and the betting show Convince Me. During this time, he has focused on daily fantasy rankings, full-season betting and even areas beyond football, such as March Madness data. In addition to these accolades, he has also done analytics for MGM, RotoHog/FastPoint games, Bloomberg Sports, and STATS.

Schefter is a sports writer and television analyst most of the time, but also often participates in discourse surrounding fantasy football. He has been an NFL insider for over 10 years with ESPN, making him an extremely credible source for all things fantasy football.

Pat Fitzamaurce is a fantasy football expert known mostly for his serial player rankings at the website FantasyPros. He also hosts a very popular fantasy football podcast called Fitz on Fantasy, where he delves deeper into his thoughts on drafting and substitution strategies throughout the season.

In addition to his renowned fantasy analytics, Fitzmaurice is currently the managing editor of both FantasyPros and BettingPros. As part of his work at the former, Fitzmaurice annually creates a draft kit that will help both beginner and expert fantasy team owners make the best of their draft picks as each season approaches.

Jared Smola is a fantasy football expert who serves as a Senior Editor for Draft Sharks, a popular fantasy football resource that offers draft advice, up-to-date rankings, and interactive tools to use throughout the season. Smola is one of the most accurate predictors of fantasy football draft positioning, and has won multiple awards for his excellency in draft predictions.

Unlike other fantasy football experts who analyze multiple fantasy sports, Smola is committed to solely studying and improving his expertise in fantasy football. If you are looking for accurate and insightful content surrounding draft day and during the season, make sure to check out Smola’s content and picks.

Who are the best fantasy football analysts?

The best fantasy football analysts are Matthew Berry, Sean Koerner, and Jared Smola. Matthew Berry has been covering fantasy football for multiple decades for major sports news outlets such as ESPN and NBC Sports. Sean Koerner is a highly respected analyst for The Action Network and has been extremely accurate in his draft predictions. Jared Smola is another extremely reputable source when it comes to drafting and player rankings. He works as a Senior Editor for Draft Sharks.

Who is the most accurate fantasy football analyst?