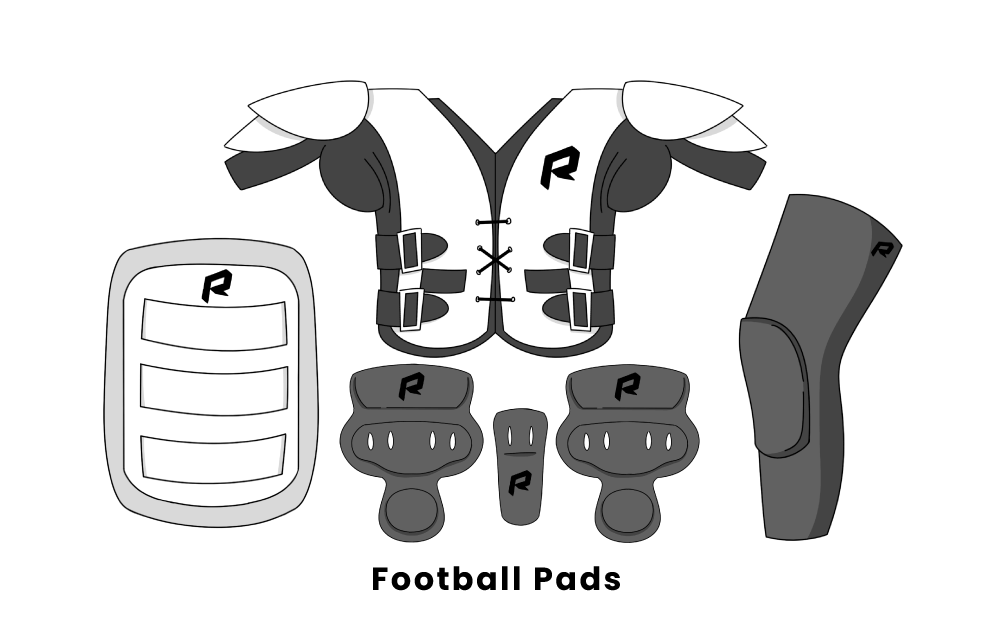 What are Football Pads?

Football is an extremely physical sport that involves tackling, blocking, and very hard hits in general. Football pads worn all over the players' bodies provide the protection necessary to play the game.

Pads are necessary at all levels of the game to prevent serious injury. That also includes shoulder pads for flag football in the case that two or more players run into each other. A comprehensive list of protective/padded gear is below. All of these products can be purchased at Dick's Sporting Goods.

In order to play, NFL players must wear helmets with chin straps and facemasks, shoulder pads, thigh pads, and knee pads. It is mandatory for high school and collegiate athletes to wear all of this padding in addition to hip pads, which are only a suggested protective measure in the NFL.

Football padding of any kind was first developed in 1877, when wool and leather were sewn directly into the uniform and protected the shoulders, thighs, and knees. This new gear was developed by a former player at Princeton named L.P. Smock. By 1894, companies had started producing shoulder pads that were heavier and offered more protection than those original pads. Additionally, they were made separate from the uniforms and were meant to be placed on the outside of the player's uniform.

The 1930s saw much bigger shoulder pads that covered much more of the upper body than previous pads had. Starting in the 1960s and 1970s, companies began to use plastic in shoulder pads, further progressing the equipment.

The first football pants to include pads were used in the 1880s, and were made of canvas. Hip pads were added around 1900, and, eventually, newer materials took over to make the equipment tougher and more effective.

The helmet was first introduced in the 1890s, but only covered some of the head and was made from leather or moleskin. Leather helmets became harder and tougher in the 1930s, but it was not until the 1940s that Riddell had gotten a patent for the football helmet made out of plastic.