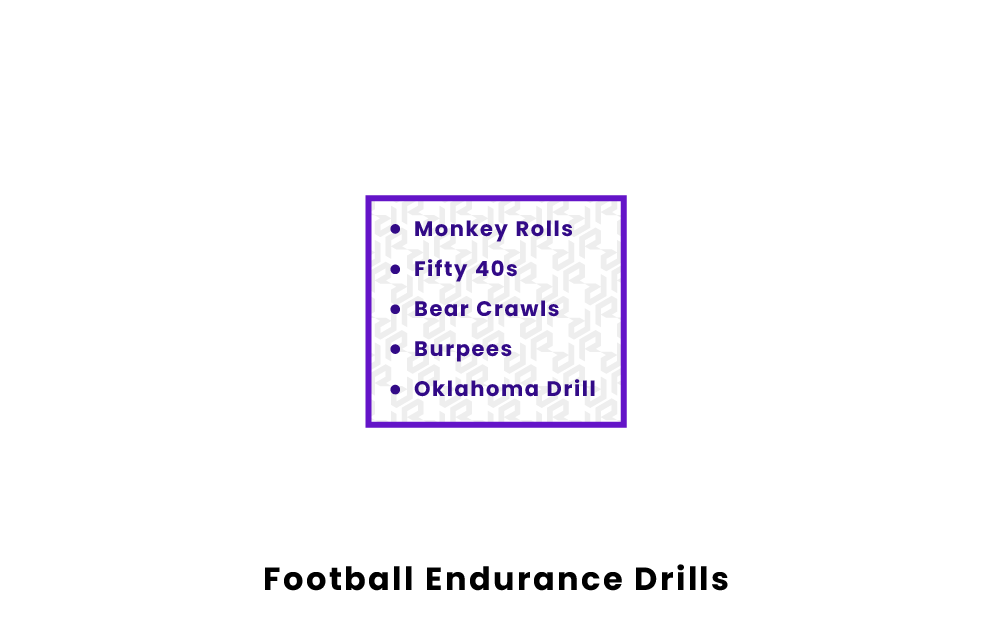 The following drills are just some examples of those used by football coaches and can be combined or changed slightly depending on the situation. They can also be used to improve skills at different positions, even if some are specified as position-specific.

These are drills that numerous positions can practice to improve endurance and general skills in the sport of football. Monkey rolls require three players and start by having one roll into another before that player jumps over him and rolls into the next player.

Both the fifty 40s and 40, 60, 80, and 100 drills involve running various distances on the field. The drill involves players running a distance of 40 yards a total of 50 times. In variations of the drill, players may run the 40 yard distance more than 50 times.

Bear crawls make players crawl across the field on their hands and feet. This drill increases play strength by forcing them to move their body in an abnormal fashion.

Burpees are an exercise that requires the player to get down on the floor with their hands on the ground and legs straight out. They then get up with their knees bent and jump into the air before landing and starting the entire drill over.

How do you improve endurance for football?

In order to improve your endurance for football, it is important to do drills that involve high-intensity workouts. Doing sprints and other running drills will improve your lung capacity and muscle endurance, which will make you a better player. The longer you are able to run a drill for, the more your endurance will be improved.

What are the best endurance drills in football?

The best endurance drills for a football player are monkey rolls, Fifty 40s, and burpees. To last an entire football game, especially playing at a high enough physicality to win, a player must have very strong muscles on their arms, legs, and core. These three exercises push those muscles to their limit so that they can grow before game time.