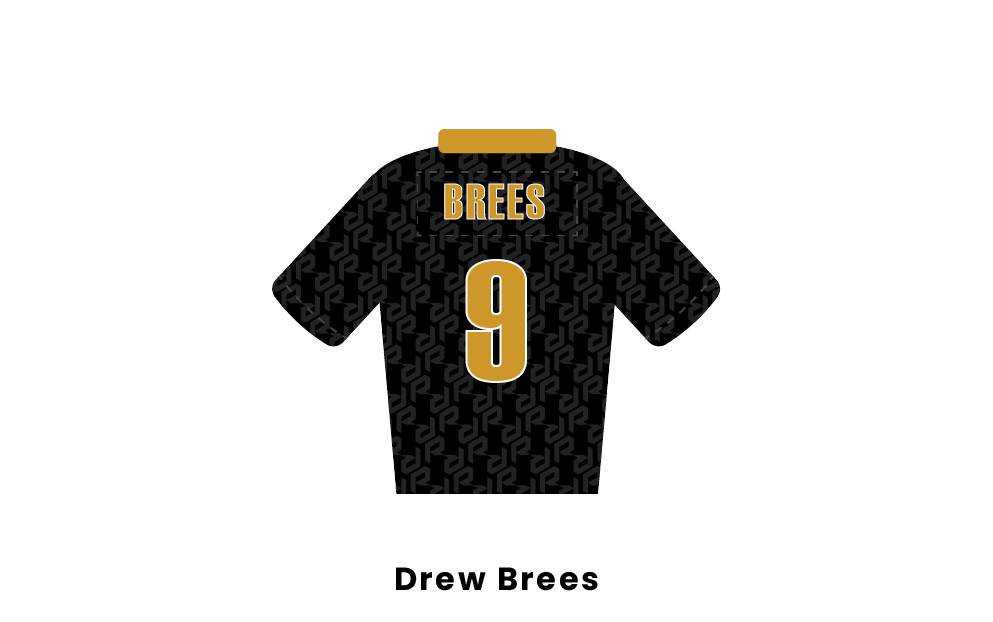 Retired NFL star Drew Brees is one of the top quarterbacks of the 21st century. After graduating from a successful college career as a student-athlete at Purdue University, Drew was drafted into the NFL in 2001 as the first pick in the second round of the draft by the San Diego Chargers. Five years later, Drew signed with New Orleans Saints, where he played 15 seasons until his retirement in 2020. One of Drew’s greatest accomplishments is when he led the New Orleans Saints to their first and only Super Bowl appearance and championship win. The Saints took the victory against the Indianapolis Colts in Super Bowl XLIV, which capped off the 2009 NFL season on February 7th, 2010.

During his football career and retirement, Brees has committed himself to inspiring and giving back both on and off of the football field. One of the most impactful parts of Drew’s life is the foundation he started with his wife, the Brees Dream Foundation, which works to help cancer patients and provides both children and their families educational opportunities.

Drew Brees started his football career when he played as a student athlete at Purdue University. While a college athlete, Drew broke many records and helped lead Purdue to many great accomplishments, including their first appearance at the Rose Bowl. In 2001, Brees’ professional football career officially began when he was drafted as the number-one pick in the second round of the National Football League’s annual draft. Brees got drafted by the San Diego Chargers, who he played with for five years before becoming a free agent in 2006. At that time he signed a contract with the New Orleans Saints, and continued to play for them for the rest of his career.

Although Brees did not win another Super Bowl, he continued to play for the New Orleans Saints. In 2018, Brees re-signed with the Saints. The contract was for two years and a guaranteed $27 million. In March 2020, Brees renewed this contact when he signed for another two years with the Saints, but this time for $50 million.

While playing at Purdue University, Drew Brees broke many records for passing statistics as well as passing yards and touchdowns for the Big Ten Conference, in which Purdue played. Although he never won the title himself, Drew was a three-time finalist for one of the most prestigious honors in college football, the Heisman Trophy.

In 2010, Drew won the most sought-after trophy in professional football, the Vince Lombardi Trophy, after he led the New Orlean Saints to their first-ever Super Bowl appearance and championship win. Following the game, Drew was awarded the Super Bowl Most Valuable Player Award for the 2009-2010 season. Brees was selected to the Pro Bowl 13 times and was honored with the Walter Payton Man of the Year Award in 2006.

Drew Brees was born in Austin, Texas, on January 15th, 1979. His full and legal name is actually Andrew Christopher Brees, but he is better known by players and fans as Drew. Drew attended Westlake High School in Austin before he began his college football career at Purdue University. While at school, he met his wife, Brittany Dudchenko, who was a fellow classmate. After graduation, the couple moved to California in order for Drew to play for the Chargers before they moved to New Orleans.

In Louisiana, Drew’s career not only took off, but the two started a family of their own. Together, they created a beautiful life together with their three sons and one daughter. All of their children were born and raised in New Orleans. Now that Drew is retired, he has more time to devote to giving back to the community through the foundation which he and his wife created, The Brees Dream Foundation.

Does Drew Brees still play in the NFL?

Drew Brees is currently a retired football player, with his final season for the New Orleans Saints occurring in 2020. Drew Brees began his professional football career when he was drafted into the NFL in 2001 by the Chargers. Five years later, he signed a contract with the New Orleans Saints and continued his career there for 15 seasons until his retirement. After his retirement, Brees briefly served as a commentator for NBC, covering football, but left the network after the 2021 season.

Does Drew Brees have any kids?

Drew Brees has four children (three boys and one girl) with his wife, Brittany Brees. The Brees family includes Baylen, the eldest child, middle children Bowen and Callen, and Rylen, the family’s youngest child and only daughter. The family of six lives in New Orleans, and all four children were born in Louisiana.

What is the Brees Dream Foundation?

The Brees Dream Foundation is a foundation that both Drew and his wife, Brittany Brees, established in 2003. After getting married, the couple decided to create this foundation and charitable organization in hopes of giving back to the community. The foundation works to both provide educational opportunities to those in need as well as help to better the lives of cancer patients. The foundation has had an impact worldwide, raising over thirty-five million dollars that have been donated to a variety of charitable causes.

Where does Drew Brees live?

Drew Brees lives permanently in New Orleans, Louisiana. The main reason that Drew lives here along with his wife and four children is that he formerly played for the New Orleans Saints and thus needed to reside close to the team’s home stadium. Brees and his wife moved to New Orleans from California after Drew signed with the Saints, leaving the San Diego Chargers.