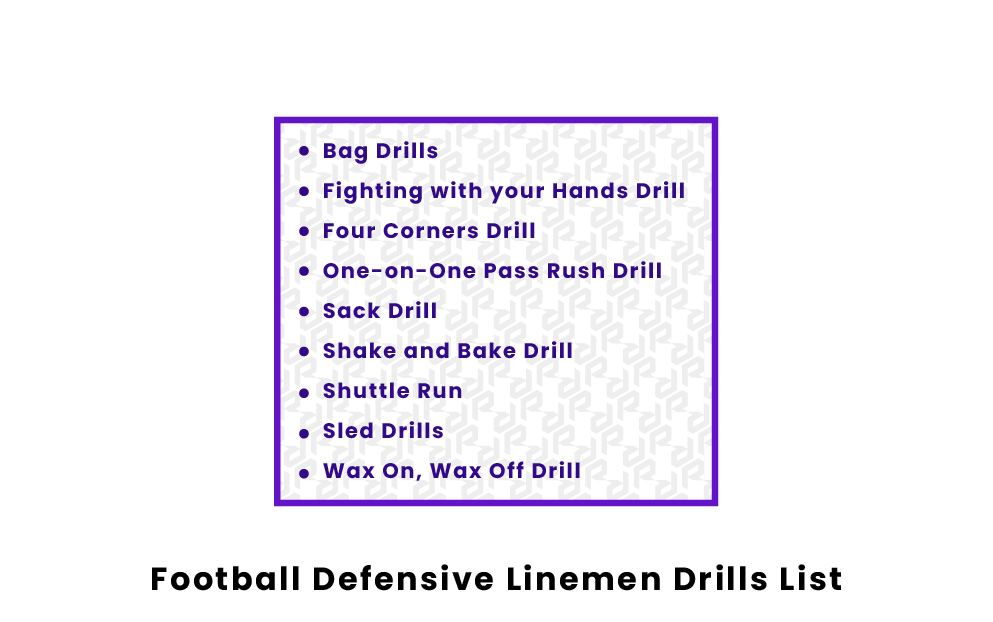 Bag drills can also be used to improve the agility of linemen. Additional bag drills include stepping over the bags sideways in a way that does not have them cross their feet, turning their bodies to face the other direction every couple of bags, or jumping between the bags to get through.

Fighting with your Hands Drill

In the fighting with your hands drill, two stationary players stand right in front of each other. The defensive lineman must fend off repeated attempts by the other player to hit the lineman in the chest.

The four corners drill is a variation on the four-cone box drill. Four cones are placed in a square. The lineman runs from the first cone to the one in front of them. They then perform a karaoke shuffle to the cone to their left before backpedaling to the cone behind them. Finally, they shuffle sideways to the first cone on his right.

The sack drill has linemen make their way through three bags and three cones before tackling a dummy.

The shake and bake drill consists of the linemen zig-zagging through dummies while stopping at each one to shake them.

The shuttle run uses three lines five yards apart from each other. The lineman starts at the middle line in a three-point stance and then runs to one of the outside lines and touches it with their hand. The lineman then runs to the other outside line and touches it with their hand. They finish by running back past the middle line again.

As a base drill, players make contact with the sled and move forward, pushing the sled back with extended arms.

Wax On, Wax Off Drill

What are the best defensive lineman drills?

What can I do to become a better defensive lineman?

The most important skills to master in order to become a better defensive lineman are your stance, strength, speed, and use of hands. A good stance is the most important starting point for a defender, as it allows you to make a good charge at the offense. Strength and speed, meanwhile, are vital for overwhelming and slipping past the offensive blockers to attack the quarterback. Finally, proper use of hands is vital for opening up gaps for the linebackers, and in avoiding costly penalties.