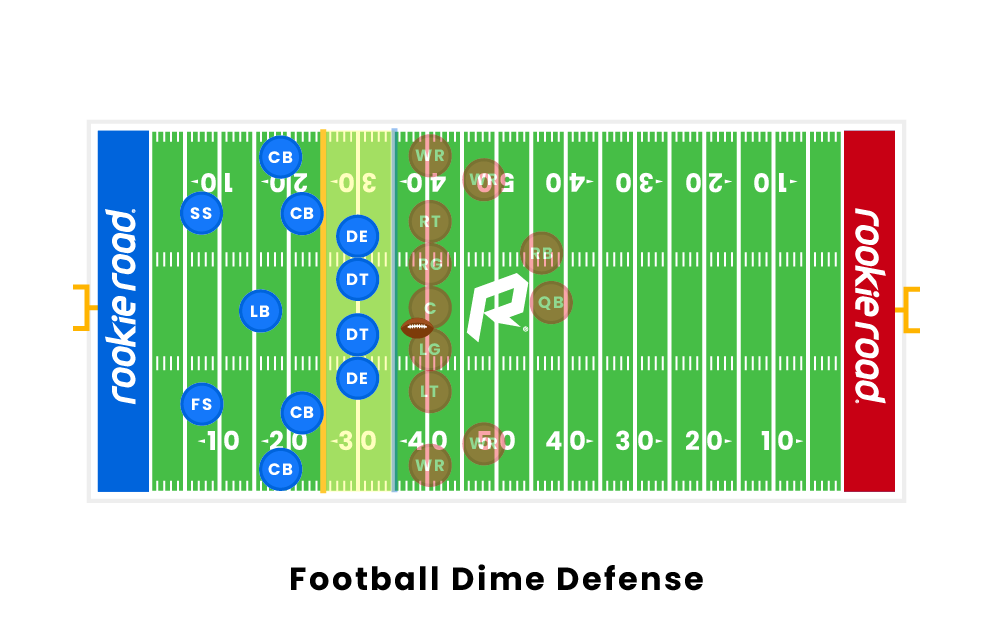 Why Is It Called Dime Defense?

The term “dime” is derived from a different defensive set called the “nickel” (because it includes five defensive backs, and a nickel is worth five cents). A dime is one step up from a nickel in currency, so the name for a defense that adds another DB to a nickel is the “dime.” Just as the fifth defensive back in a nickel is called a nickelback, the sixth DB in a dime set is a dimeback.

Uses of the Dime Defense

The dime defense is used to defend obvious passing situations or spread offense formations. This is because more defensive backs are needed to cover extra wide receivers. Although it is used less often than a nickel defense, the dime is still common knowledge and terminology among coaches, players, and analysts.

Technically, any defensive formation that includes six defensive backs can be referred to as a dime package. However, there are some common formations in which the dime is used. One of these is the 4-1-6, which leaves only one linebacker to cover a running back or keep an eye on the quarterback while maintaining four linemen to apply pressure on the quarterback. The other main dime formation, the 3-2-6, is less concerned with rushing the pocket and more with keeping tighter coverage in the secondary.

Strengths and Weaknesses of the Dime

As with any defensive scheme, the dime defense has its own strengths and weaknesses inherent to its formation. Read on to learn more about them!

When a defense knows an offense needs to throw the ball, the dime defense allows more coverage of receivers, making it much harder for the quarterback to complete a pass. The extra defensive backs also prevent big plays because they are often farther off the line of scrimmage. A dime defense is an ideal scheme to use against an offensive play utilizing four wide receivers and no tight end. In this situation, the extra two defensive backs will cover the additional two wide receivers.

While the dime is great for defending obvious pass plays, it can leave a defense extremely vulnerable to runs. Replacing bigger, stronger linemen and linebackers with smaller, quicker defensive backs makes tackling and getting through blocks much more difficult for a defense. Lining up in a dime package also spaces the defense out more, rather than keeping more players up toward the line of scrimmage and tackle box.

What is a dime in football?

How do you set up a dime package in football?

Why do they call it a dime defense?

The dime defense in football gets its name from the dime, a US coin that is worth 10 cents. In terms of football, the name came about as a result of the nickel defense. Since a nickel (the coin one step down in value from a dime) is worth five cents, the defensive formation that utilizes five defensive backs became known as a “nickel defense.” Then, when adding a sixth defensive back, it became common to refer to that defensive scheme by the name of the next coin up the chain of value, which is the dime: thus, the dime defense.