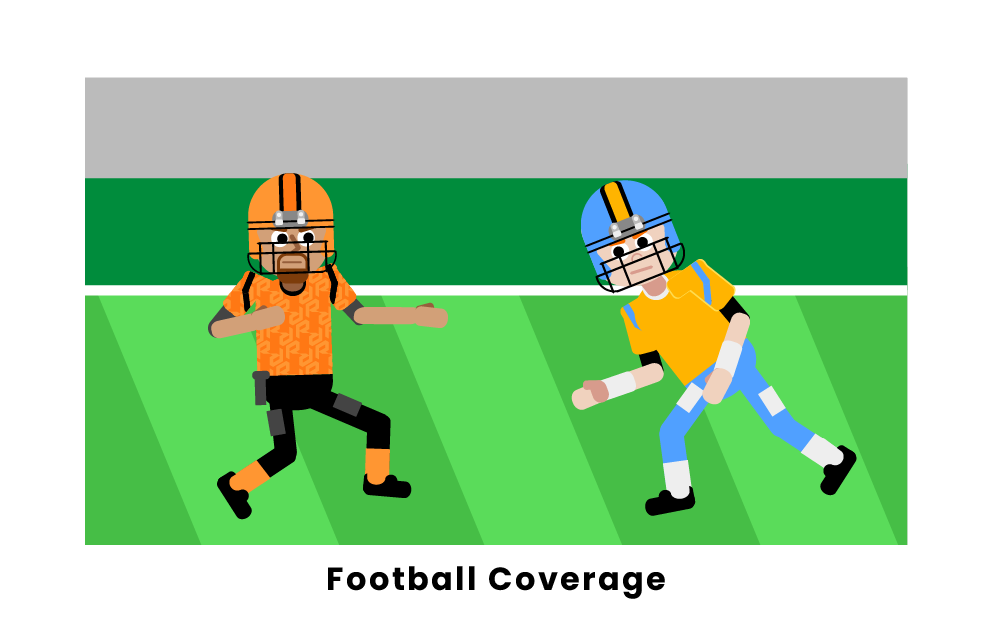 What is Coverage in Football?

Coverage in football is the alignment of the defense on the field. A good defense will adapt their coverage strategy based on the opposing team. There are two basic kinds of coverage: 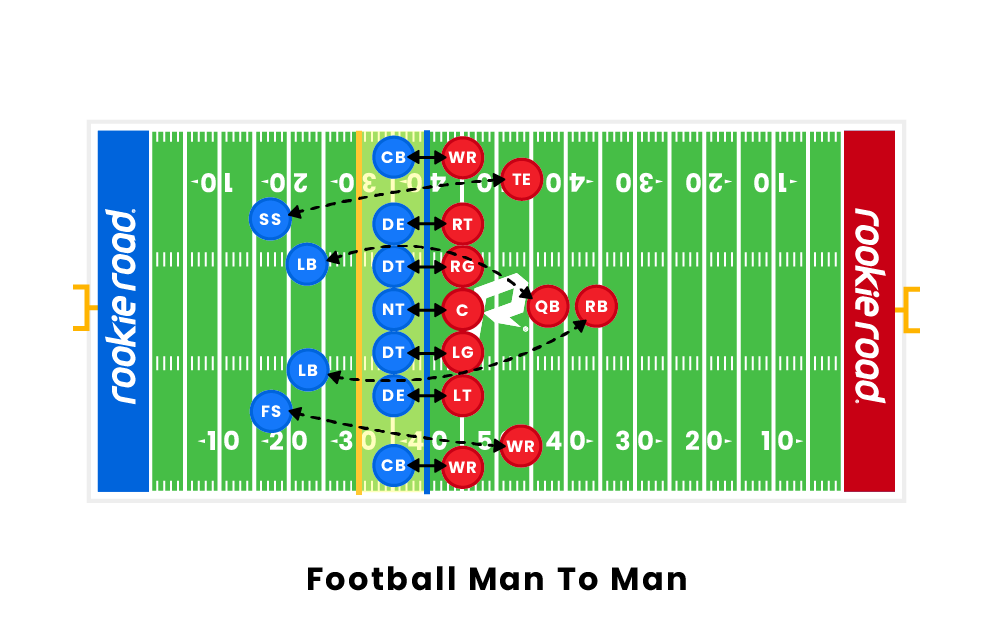 In man to man, players cover other players based on:

An example of man to man coverage in football is when a cornerback will cover a wide receiver. This prevents the wide receiver from getting open to catch a pass thrown by the quarterback.

When to Use Man Coverage

Teams typically use man coverage when their defensive backs and linebackers have favorable matchups against opposing receivers. If the defense is able to hold each receiver down in a one-on-one matchup, it frees up time for the linemen to rush the quarterback.

Also, man coverage is the better choice when it comes to short passes. Since coverage usually starts at the line of scrimmage when a team is in man defense, it is easier for defenders to quickly react to short passes. 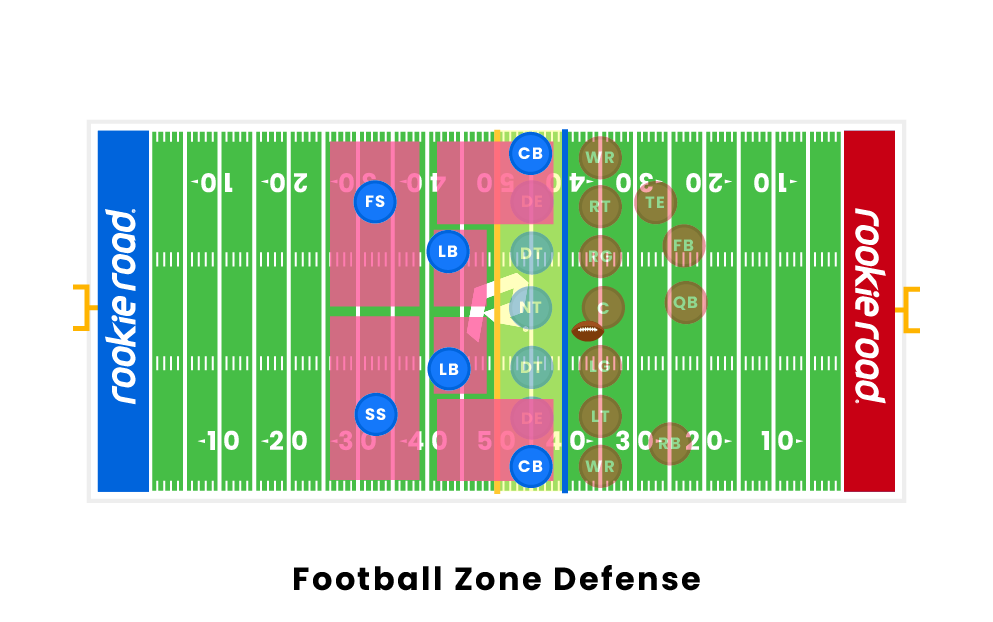 Zone coverage allows defensive backs to read the quarterback and receivers during the play. On a passing play, the defense will protect a zone and watch for receivers on the offense that enter.

When to Use Zone Defense

Zone defense is a better choice of coverage when a team needs to guard against deeper threats. Since all areas of the field are covered, quarterbacks will have a harder time making throws and avoiding interceptions.

A blitz is when the defense pressures the quarterback with extra defenders to tackle them for a sack right after the snap. Another reason to blitz is to force the quarterback to make a rushed throw, making the chances higher of the ball being intercepted or incomplete.

It is important to blitz when the defense is desperate to keep the offense from gaining any yardage. This usually includes situations like third down, fourth, or when the goal line is too close for comfort. The reason for this risk aversion is that the blitz is the defense essentially sacrificing a more conservative play option in order to add extra pressure to the offense.

Each defensive back and linebacker is assigned an offensive player to cover, with one of the two safeties providing help deep down the middle of the field if a defender fails to stay with their assignment. This free safety is the one person who can provide deep coverage, hence the name Cover 1.

Each defensive back and linebacker is assigned an offensive player to cover, with both safeties providing help deep down the middle of the field if a defender fails to stay with their assignment. This strategy is called Cover 2 because it divides the deep defensive area into two halves and has two men in the back to cover it.

Each defensive back and linebacker is assigned an offensive player to cover, with no help from the two safeties. In cover 0, both safeties often creep toward the line of scrimmage before the ball is snapped in an attempt to blitz the quarterback and record a sack. This leaves “zero” coverage for the deep area of the field, hence the term Cover 0.

Each defensive back and linebacker is assigned an area of the field to cover rather than one singular opposing player. Cover 2 is designed to prevent deep completions, requiring the linebackers to cover short and intermediate routes while the cornerbacks and safeties are responsible for covering long pass attempts. This strategy is also called Cover 2 because it divides the defensive area into two halves.

A common variation of the Cover 2 is known as the Tampa 2. This coverage drops a middle linebacker in between the safeties in the center of the field, while the other linebackers stay shallow to cover underneath routes.

Each defensive back and linebacker is assigned an area of the field to cover rather than one singular opposing player. The field is essentially split into thirds, with two linebackers covering short passes, two linebackers covering intermediate passes and cornerbacks and safeties covering deep passes. This is a great strategy that positions the strong safety as the primary enforcer. It is called Cover 3 because it divides the back defensive zone into thirds.

This coverage seeks to prevent deep passes, allowing for short completions just beyond the line of scrimmage by requiring two linebackers to cover the middle of the field while the rest of the defenders in coverage drop back to cover deep zones. This leaves four defenders for the back field, each with a quarter to guard.

Cover 6 is very similar to cover 4 and further tries to protect against long passes by dropping an additional linebacker into deep coverage and leaving two cornerbacks alone to defend against short and intermediate completions. Similar to a blitz, this type of coverage is best suited for third down and fourth down situations when the offense needs to pick up lots of yards in order to gain a first down and keep possession of the ball.

What is the difference between man and zone coverages in football?

Man coverage features each defender having an assigned player on the offense to cover, while zone coverage is when a defensive player covers an area of space. Both of these coverage types are used often throughout any football game. There are many different variations and plays associated with both man and zone coverage.

What is the difference between a defensive scheme and coverage?