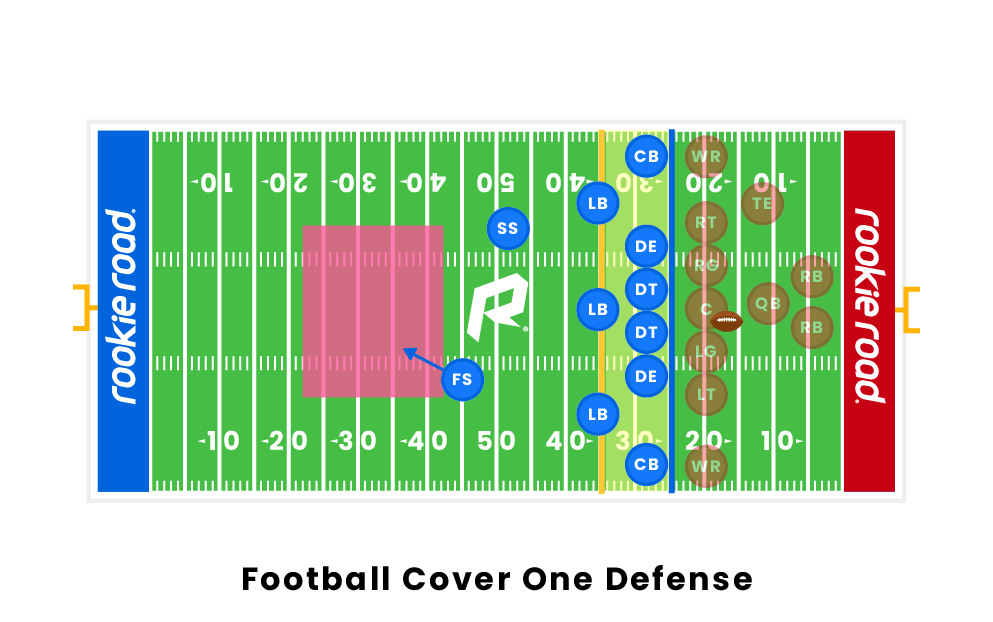 What is a Cover One Defense in Football?

Cover one is a defensive formation where there is one safety at the top of the defensive alignment. This safety has responsibility for assisting coverage on all deep routes. Underneath the corners and outside linebackers, the cover one formation utilizes man-to-man defense with a tight alignment. Corners, in particular, will shade the outside of their receiver, meaning that they will center their body on the arm of the receiver closest to the sideline. This helps to pin the receiver to the sideline in long routes, effectively reducing the success of deep routes to the outside. The inside linebacker or linebackers are responsible for reading the quarterback and running backs, preparing for a run or short inside pass.

How to Use Cover One Defense

The true key to winning with a cover one defense relies on forcing offensive plays into the “underneath hole.” This is a circular area under the high safety’s alignment. It stretches roughly the distance between the hash marks. This area is occupied by the middle linebacker, or “Mike,” in a 4-3 defense. Alternatively, in a cover one “Robber” setup, the defense can disguise their play to look like a cover two by placing a strong safety overtop; however, after a defensive audible or snap of the ball, the strong safety comes down toward the line of scrimmage to fill the underneath hole.

Pros of the Cover One Defense

Cover one defense was initially designed to combat the run game. Specifically, it was developed to combat the “West Coast Offense” created by Bill Walsh, Joe Montana, and the San Francisco 49ers, and to shred short pass plays. The man under approach forces the defense to be aggressive while the four down linemen collapse the pocket and force rushed, and often incomplete, passes. Additionally, because of the outside shade alignment, most plays are funneled to the underneath hole, allowing for minimal yardage gains on short passes and runs.

The biggest advantage to the cover one shell, however, is easily its blitz versatility. Since all the receivers are covered, the high safety can abandon their deep responsibility to blitz, or the defense can disguise their blitz by sending a corner and having the safety cover the receiver instead.

Cons of the Cover One Defense

Additionally, the alignment of the secondary leaves multiple lanes for a receiver to gain yardage after a catch. The most common strategy is for the offense to utilize their best receiver on quick, decisive routes that don’t allow for the covering defender to react.