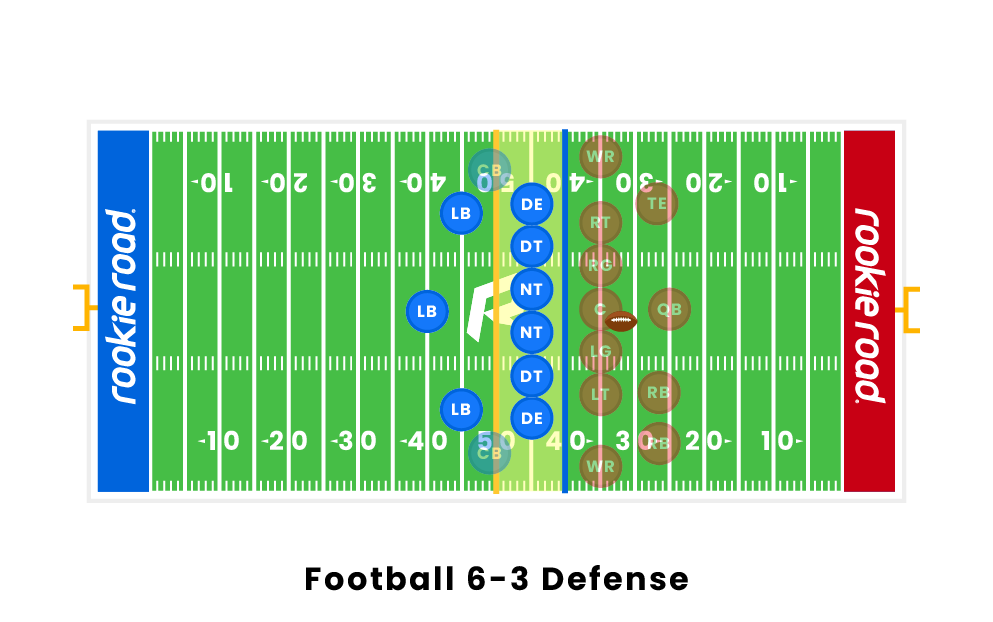 Players and Roles in a 6-3 Defense

Every player in a 6-3 defense is focused on stopping the run and preventing a score. The six down linemen include four defensive tackles (two nose tackles) and two defensive ends playing outside of the offensive tackles. The linemen are responsible for closing gaps and keeping forward motion.

The three linebackers play inside of the defensive ends. A 6-3 alignment may also use two linebackers with a safety playing up close to the line of scrimmage. The linebackers make quick reads at the snap, moving up to cover the line on run plays or dropping back into a zone on pass plays. This variation depends on the play and the situation.

The 6-3 defense typically employs two cornerbacks and sacrifices the presence of safeties for more players on the defensive line. However, some coaches will use one or two safeties instead. The defensive backs provide deep coverage and also perform their duties based on a read. On run plays, they contain the outside and make a tackle if necessary. If they read a pass, the defensive backs cover the running backs.

The 6-3 defensive front is effective for stuffing the run, especially around the goal line. Having nine players close to the line of scrimmage allows much more penetration than when only seven or eight players are in the same space. Having six down linemen forces the offense to adjust because if a tight end or running back is held to block, the defense has a free run to the quarterback. If a safety is lined up close to the line of scrimmage in a linebacker’s position, this could also bait the offense to throw over the middle, where the safety can make a play on the ball.

This alignment cannot be used effectively in higher levels of football or anywhere away from the goal line. It is difficult to cover the pass because the corners are left alone to play one-on-one with their wide receiver matchup and also because any receivers inside are able to be matched up on a linebacker or no one at all. Covering the pass, however, is not the goal of using a 6-3 defensive front. It is meant to stop the run and the offense close to the goal line as its disadvantages do not allow it to be used anywhere else.