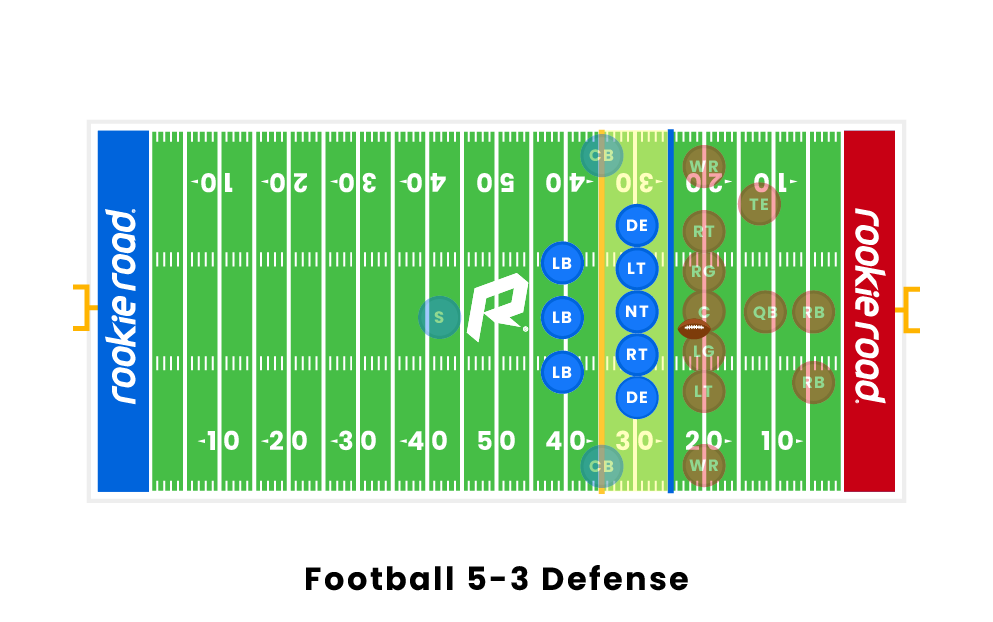 What Is a 5-3 Defense in Football?

There are three defensive tackles, with two defensive ends that usually line up wide of the offensive tackles. The three linebackers usually line up inside of the defensive ends with one high safety behind them and the two corners out wide on the wide receivers. The 5-3 front allows for many options in terms of blitzing the quarterback, along with stopping the running game with relative ease.

Having eight players close to the line of scrimmage allows for success in stopping the run. With five down defensive linemen, it creates holes for the linebackers to go and stop the running back more easily than with only three or four linemen in front of them. Blitzing becomes very easy in this front as well because each defensive lineman is one-on-one with an offensive lineman in front of them, allowing linebackers to fly through gaps to sack the quarterback. By packing the box, a 5-3 front can stop any sort of power running game that is tossed in its direction.

Because there are eight players in the tackle box, a good passing game can be really difficult to stop in a 5-3 defense. A strong passing game that attacks the flats and seams can stretch a 5-3 into situations that they cannot defend with consistent success. If an offense decides to stack one side of the field, a 5-3 does not have the versatility to easily adjust and counter that while maintaining good defensive balance.

The 5-3 defense is prevalent in youth football because very few youth teams have great passing attacks. This minimizes the disadvantages of this alignment, allowing teams to focus on stopping the run close to the line of scrimmage.