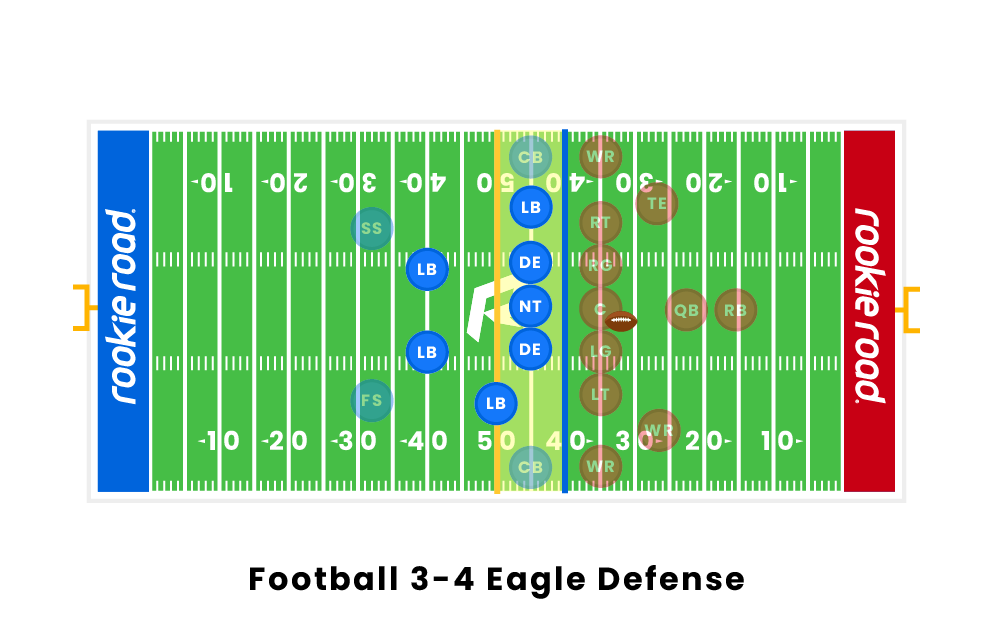 What Is the 3-4 Eagle Defense?

A 3-4 Eagle defensive front looks almost identical to a base 3-4 front, except there are some subtle changes. The three defensive linemen line up inside the offensive tackles and one or two linebackers set up on the line to provide coverage on the outside of the line. The 3-4 Eagle defense allows the three linemen to cover all five tackles by forcing double-teams.

Players and Roles in the 3-4 Eagle Defense

Because of this alteration to the formation, the offense is forced to adjust because of the smaller, quicker player playing inside against the interior of the offensive line, as linebackers tend to be faster than defensive tackles or ends.

By placing linebackers on the line of scrimmage, a level of versatility and unpredictability is introduced to the defensive line that is not normally present. Four players will usually rush the passer. However, now they can come from many more directions than in a base 3-4 front, while still maintaining good coverage at the same time. A 3-4 Eagle front is effective at drawing guards to the outside and creating interior gaps to get to the quarterback or running back.

The cons of a 3-4 Eagle front are that it makes edge rushes difficult and forces linebackers into zone coverage. Getting around the five double-teaming tackles is nearly impossible for the three linemen, preventing them from blitzing. Also, moving a linebacker up onto the line stretches the coverage of all the linebackers, forcing some of them into zone coverage. This creates larger holes and opportunities for long runs and passes.