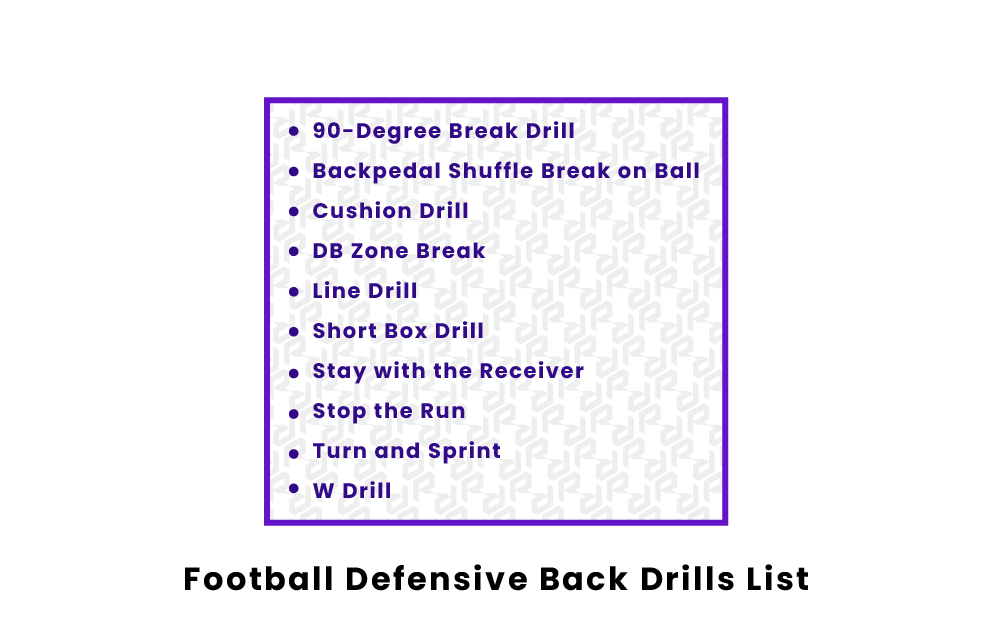 Defensive backs are the stars of the defense. Every play, they line up against elite receivers and running backs, so they need to have skill and speed to keep up. Although they are not as celebrated as their offensive counterparts, defensive backs are some of the most talented and athletic players on the team. Here is a list of drills to help reinforce all of the core defensive back skills, including tackling, coverage, and making reads.

The backpedal shuffle break on ball has the defensive back line up facing the coach from five yards out. The player starts off in a backpedal before they shuffle to their left. The coach then throws the ball past the player, at which point they must turn out of their shuffle and sprint at a 45-degree angle to catch it.

The line drill starts with a backpedal. On the coach’s signal, the player turns the lower half as if they are about to spin around and start sprinting, only to return to backpedaling. They do this a few times before actually turning all the way around and breaking into a run.

Stay with the Receiver

In the stay with the receiver drill, a fourth cone is added to the turn and sprint drill at about a 45-degree angle from the third cone. The player backpedals to the second cone, turns and runs to the second one, then cuts to the fourth cone afterward. This can be done with or without a receiver, which can change up the route and pacing.

The stop the run drill places a fifth cone farther down the field on that same 45-degree angle from the third cone. After the run to the fourth cone, the player must shift to another gear and sprint to the fifth cone.

The turn and sprint drill uses three cones five yards apart from each other. The participant starts out in a backpedal from the first cone. When they get to the second cone, they turn and run to the third cone.

In the W drill, the player makes their way through two rows of three cones, each of which is five yards apart from the other, making a rectangle. The player starts at the cone all the way to the right of the first row and backpedals to the cone directly behind them in the second row. From there, they sprint to the middle cone in the front row. They then backpedal straight back to the second row-middle cone and run forward once more to the first-row cone on the left.

What are the best defensive back drills?

The best defensive back drills are the Cushion Drill, the DB Zone Break Drill, the Stay with the Receiver Drill, and the Turn and Sprint Drill. These drills enhance and maximize a defensive back’s vital skills, which include staying with receivers while running both backwards and forwards, covering receivers, and predicting where and when the quarterback will throw the ball in order to secure interceptions.

How do I become a better defensive back in football?

The most important skills to work on to become a better defensive back are awareness, technique, alignment, and athleticism. Great defensive backs will always be aware of what the down and distance is and make a read on the play. Perfecting your technique can improve tackling and coverage. Knowing your alignment can set you up to make a big play. Any improvements in strength, quickness, and endurance will make you more effective on the field.