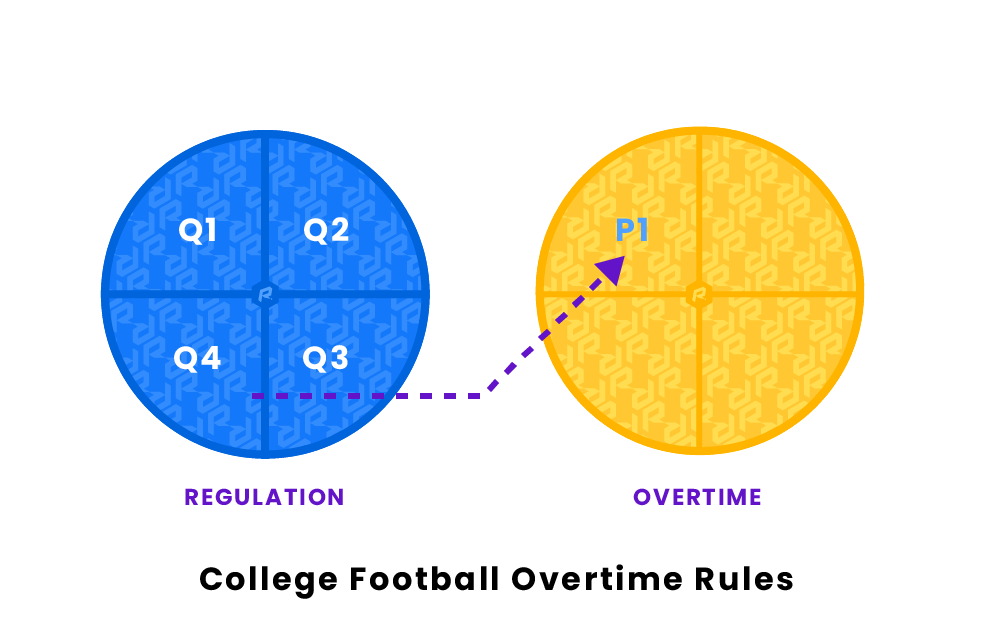 The college football overtime rules currently in place were instituted in 1996 and are commonly known as the “Kansas Plan” due to the resolution of a tied Kansas high school football game. However, there have been minor modifications since then in order to perfect the overtime model. The most recent changes were made in 2021 and aimed to limit the number of snaps and shorten multiple-overtime games.

Below, we will explain the rules of overtime in college football. We’ll cover the coin toss, timeouts, strategy, history, and the new rules of OT.

Overtime in college football is different than in the NFL. It starts with a coin toss where the winner chooses one of the coin toss options; to play offense or defense or Which end of the field. College football is not sudden-death. Teams alternate possessions starting at the 25-yard line. There is no game clock and no kickoffs. The first, second, and third overtime periods all have slightly different rules, which we will cover below.

If the score is tied after the end of the fourth period of regulation, the referees and team captains will gather for a coin toss at the 50-yard line, similar to the one held at the start of the game. The visiting team’s captain gets to call the coin toss.

The winner of the coin toss gets to choose between one of two options:

There is no option to defer in college overtime. The losing team of the coin toss must choose the remaining option.

For example, if the winning team chooses to play offense, then the losing team will choose the side of the field.

In overtime, each drive will start at the opponent’s 25-yard line. Each team will have one possession to score a touchdown or field goal, hopefully not turning the ball over in the process.

The amount of time the possession takes does not matter, as there is only a play clock and no game clock in overtime. The team who gets the ball second will then get one attempt to match or beat what their opponent accomplished. The drive can start on the hash marks or anywhere in between.

Once the game reaches three overtimes, teams alternate being on offense, attempting a two-point conversion rather than starting a drive at the 25-yard line. This essentially makes each team’s possession a one-play drive. Additional overtime periods can be played until a winner is determined.

How long is overtime in college football?

Each overtime period may take 10 minutes or more to complete without timeouts, commercial breaks, and video replay reviews. Overtime in college football is untimed, so it will last until a winner is determined. Additional overtime periods are used if the score remains tied.

No, college football overtime is not sudden death. Instead, each team has an opportunity to possess the ball. The team with the most points at the end of an overtime period wins the game.

Is a safety possible in college football overtime?

Yes, a college football game may end on a defensive touchdown or safety, although these are rare. Since teams are positioned so far downfield on offense, it is difficult for them to take the ball all the way back to their own endzone for a safety.

What was the longest college football overtime game?

The longest college football overtime game lasted nine overtimes. In a 2021 Big-10 matchup between the Illinois Fighting Illini and the #7 ranked Penn State Nittany Lions resulted in a 20-18 win for the underdog Fighting Illini. Prior to this game, the record for longest overtime game was seven overtimes, which was first accomplished in 2001 and occurred four more times before Illinois and Penn State surpassed that mark 20 years later.