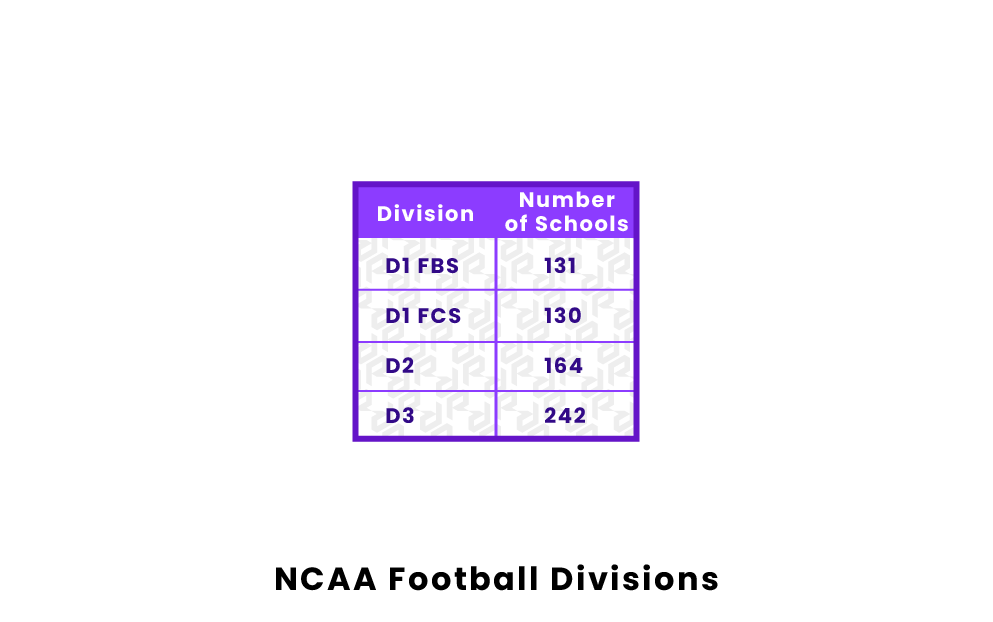 What Is the FBS?

The FBS (Football Bowl Subdivision) is the top tier of college football. Teams that compete in the FBS have a few distinct characteristics. FBS schools can offer the most scholarships of any level at 85. They also are able to have the longest schedules of 12 games, along with playoff and bowl games following. Most importantly, they are the only teams allowed to compete in bowl games at the end of the season, which alone generates much more revenue than any other level of college football in just one game.

There are 10 regional conferences that compete within the FBS. They are:

As of 2022, there are a total of 131 football teams currently in the NCAA Football Bowl Subdivision. However, the number of teams in the FBS changes regularly, with schools often being added to the division or leaving it for other divisions, such as the FCS or Divisions II and III. Many of the most consistent teams in the FBS are members of major conferences like the Big Ten or Pac-12 and are often highly-ranked and prestigious schools such as The Ohio State University, the University of Notre Dame, the University of Michigan, and the University of Alabama.

One of the unique elements of the FBS is its playoff structure, which, unlike the FCS, Division II, and Division III, is not officially coordinated by the NCAA. The FBS playoffs, also known as the College Football Playoffs, are known for their traditional New Year’s Day Bowl Games, such as the famous Rose Bowl. Currently, the College Football Playoffs follow a four-team bracket system, but in upcoming years, the division is expected to transition to a larger, 12-team bracket. Read on to learn more about these two playoff formats!

The current playoff system of the FBS is very distinct among football playoff formats. A special committee, the CFP Playoff Committee, selects four teams to participate in the College Football Playoff at the end of the season. These four teams compete in a semifinal round in late December and early January, with each game being a “Big Six” bowl game, such as the Rose Bowl, the Cotton Bowl, the Peach Bowl, the Sugar Bowl, the Orange Bowl, or the Fiesta Bowl. After the Bowl Games, finals are held to determine the national champion of the FBS. The College Football Playoffs currently generate the most revenue of any division of college football, making FBS football the biggest and most well-known of any level of football.

Sometime between 2024 and 2026, the FBS College Football Playoff (CFP) will expand to a 12-team postseason field. Like in previous years, all of the teams will be chosen by the selection committee. However, six teams will be selected from the highest-ranked conference champions, and the other six will be “at-large” teams selected by the committee for their excellence. The tournament will continue to use a single-elimination bracket format. There will be four rounds, and the top-four seeded teams will get a bye in the first round.

The FBS postseason consists of a total of 43 bowl games. Bowl games are a unique and distinguishing feature of the FBS postseason; no other college division features such a format. Bowl games are a single game invitational between two teams that serves as the end of the college football season for those teams. Being invited to a bowl game is a prestigious and profitable opportunity for college teams. They get exposure on a national stage and make money through ticket sales and television rights.

There are several ways to be invited to a bowl game, but most slots are filled by conference champions. In order to qualify for a bowl game, teams must have more wins against FBS opponents during the season than they have losses against all opponents. As there are sometimes more bowl game slots than eligible slots, occasionally, teams with losing records are invited to a bowl game. These invitations are typically given out to teams that have only lost one or two games and meet other criteria, such as academic performance. Meeting the criteria for being invited to a bowl game is known as being “bowl-eligible.”

Bowl games are held over a three-week period beginning in mid-December and ending after the first week in January. The most well-known bowl games are the “Big Six” held around New Year’s Day, which includes the Rose, Sugar, Orange, Fiesta, Peach, and Cotton Bowls. Each year, the two CFP semifinals rotate among the Big Six bowl games.

The following is a list of notable college football teams who are or have been a part of the FBS:

What is the FBS in football?

The FBS, or Football Bowl Subdivision, is the premier division of college football. It features the highest level of play, biggest schools, most scholarships, and greatest prestige of all the college football divisions. The FBS uses a unique playoff format in which a selection committee picks the top four (soon expanding to 12) teams, which face off in a single elimination bracket.

What are the college football divisions?

How many conferences are in the FBS?