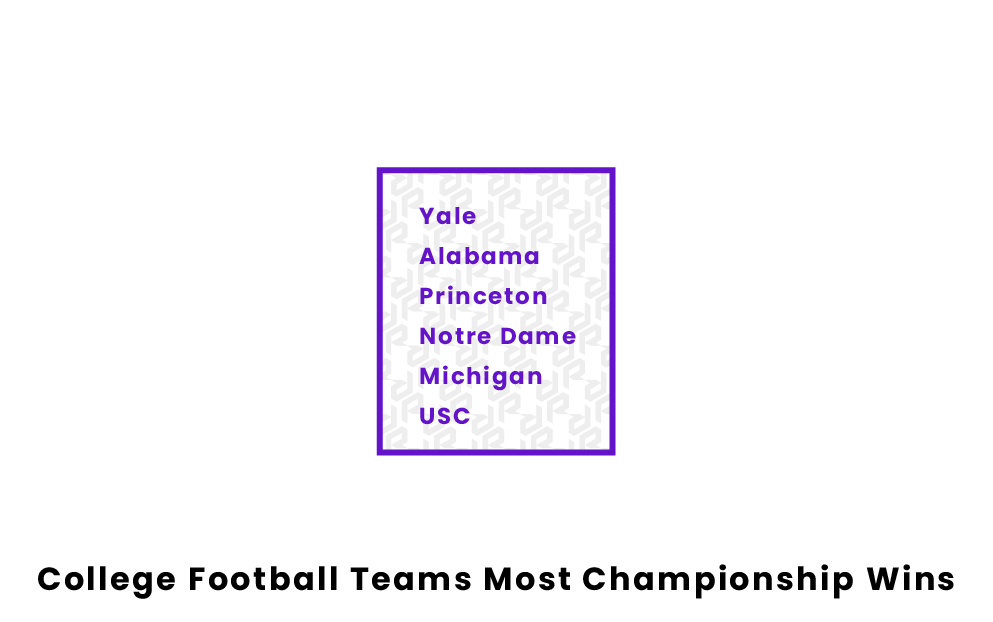 College football has some of the most dedicated fanbases in all of sports. The athletes may not be professionals, but that doesn’t lessen the sweet sensation of winning a championship that comes for one team at the end of every season. Before the College Football Playoff was introduced, top teams would compete in the BCS Championship Game to determine a national champion. The sport has been around for over a hundred years, and there have been countless winners, but only a few teams can claim their spot as the greatest programs of all time. Keep reading below to learn more about the college football teams with the most national championships.

Universally regarded as the best college football program on the planet, Alabama has a storied history that has taken them to this point. The program won its first title in 1925 and came back the following year to defend their championship in 1926. They won once again in 1930, but after that, the program entered a dry spell. It would be 31 years before they captured their fourth title in 1961, but they went on to win four more trophies in the next two decades. They got championship number 10 in 1992, but the school really took off in the 2000s. Since 2009, they have won six national titles, with their most recent victory coming in 2020. Their 13 championships during the poll era are the most of any college football team.

Another Ivy League school that often gets left behind in college football discussions, Princeton was Yale’s top rival before the turn of the century. They won six titles from 1869-1879, and they continued to dominate in the 1880s, winning four more championships during the decade. They took home their tenth title in 1983 and, from 1896-1911, won four more national championships. The last of their 15 championship wins came in 1922, cementing them as one of the greatest college football programs in the early ages of the sport.

After the historic heights reached by Yale and Princeton, it was Notre Dame’s turn to take over the college football landscape. From 1919-1930, they won four national titles, but the 1940s would be their best decade by far. The team won four championships during the 1940s, becoming one of the most legendary programs ever. They captured a pair of titles in the sixties and seventies, and their most recent national championship came in 1988. Their nine championships in the poll era are the second-most all-time.

Michigan is one of the most respected college football programs in the country, and for good reason. Their 976 wins are the most ever by any college team, and they have nine championships to go along with that regular season success. They four-peated as champs from 1901-1904 and also won a pair of titles in 1918 and 1923. Ten years later, in 1933, the team got championship number seven, and in 1948 they reached eight. Their most recent national championship came in 1997.

Tied with Michigan at nine titles, USC (or the University of Southern California) has been a successful college football program for a number of decades. Over 70 years separate their first and last titles, highlighting their continued excellence in the sport. They were back-to-back national champions in 1931 and 1932, though it would take them a while to earn title number three. They did so in 1962, and from that point until 1974, the team would win three more championships. The program added its seventh trophy in 1978 but, after that, once again went into a title drought. They broke out in a big way in 2003, winning their eighth championship before repeating for title number nine in 2004.

Which college football coach has the most championships of all time?

The college football coach with the most national championships is Nick Saban, with seven. Saban won his first title with LSU in 2003, but that would not be where his legacy ended. He ended up becoming the head coach at Alabama, where he won six titles from 2009-2020. He is seen as one of the best college football coaches of all time and continues to coach Alabama to this day.