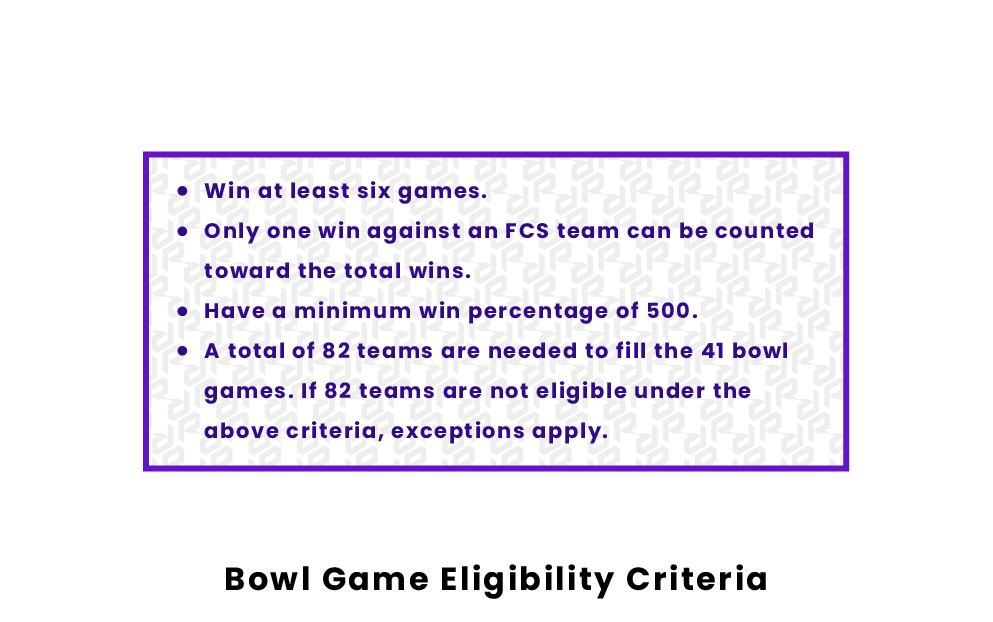 Bowl games are postseason matchups awarded to Football Bowl Subdivision teams that perform well during the regular season. Since only four teams make the College Football Playoff, bowl games are typically considered the biggest game for most college football programs. Read on to learn how teams become eligible for bowl games, including the criteria a team must meet to become bowl eligible.

How do Teams Become Eligible for a Bowl Game?

Teams become eligible for bowl games by winning six or more games and having a winning percentage of at least .500. Football Bowl Subdivision (FBS) teams typically play 12 regular season games (not including conference championships), so winning six games in the regular season usually makes a team bowl eligible. However, a team can only count one win against Football Championship Subdivision (FCS) opponents toward their win record. Consequently, FBS teams typically only schedule one FCS opponent per season.

There are exceptions to the bowl game eligibility criteria if there are fewer than 82 bowl-eligible teams. Every slot in the 41 bowl games must be filled, so teams that are below .500 or have two wins against FCS opponents may become eligible for a bowl. Teams are granted bowl eligibility based on their regular season record and Academic Progress Rate (APR). APR measures the academic performance of players on each team, and ranks them accordingly. Therefore, the 5-7 team with the highest APR is the top team on the list if all spots are not filled by eligible teams.

Is a 5-7 team bowl eligible in college football?

How are teams selected for bowl games?

What happens if there are not enough bowl-eligible teams?

If there are not enough bowl-eligible teams, invitations are extended to teams with a 5-7 record that have the highest Academic Progress Rate. This is an exception to the normal criteria for bowl eligibility. Academic Progress Rate measures a team's academic performance and ranks them accordingly. Depending on the number of slots available, multiple 5-7 teams may be extended invites to bowl games.