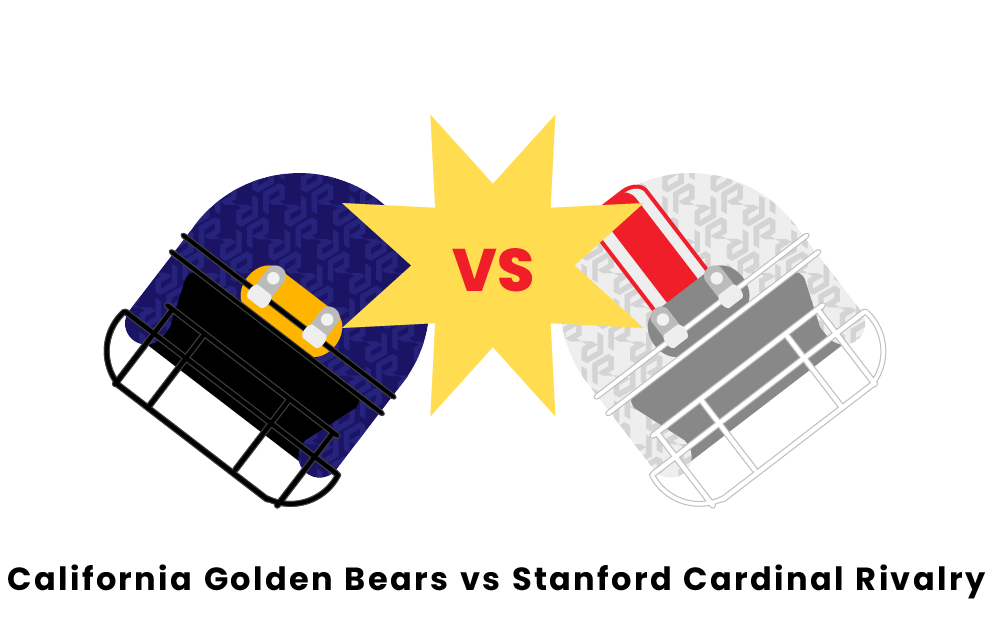 The feud between the UC Berkeley Golden Bears and Stanford Cardinal is an iconic college football rivalry celebrated across three centuries by students, alumni, and fans of both schools. The yearly late-season matchup is called the Big Game, and the winner is awarded the Stanford Axe, a trophy with its own special history and lore. Read on to learn about all this classic rivalry and its rich history!

The rivalry between the University of California, Berkeley Golden Bears, and the Stanford University Cardinal football teams is one of the oldest and most cherished in all of college sports. The meeting between the teams typically takes place toward the end of the college football season and has come to be known as the Big Game. Both schools have extensive traditions designed to generate enthusiasm leading up to the Big Game, with rallies, bonfires, reunions, theatrical productions, and athletic competitions in other sports taking place on both campuses during the week prior.

The rivalry began in 1892 when the first meeting was organized by future US President Herbert Hoover, who was then the student manager of the Stanford University football team. The initial game attracted many more spectators than expected, beginning a popular and enduring tradition. Starting in 1933, an iconic trophy known as the Stanford Axe has been awarded to the winner of the Big Game, who is then permitted to keep it on campus until the next matchup. The Stanford Axe began as a prop in a student rally and has been stolen several times by members of both student bodies over its history.

The most infamous moment in the rivalry occurred at the end of the 1982 Big Game, in an incident called The Play. Down by a point with four seconds left on the game clock, California’s Kevin Moen received a kickoff and then lateralled the ball right as he was about to be tackled. Four more lateral passes later, Moen once again had the ball in his hands and ran into the end zone to win the game, colliding with a trombonist from Stanford’s band, who was prematurely on the field to celebrate.

Stanford at Cal on November 20th, 1982: In a bizarre series of events known as “The Play,” the Golden Bears overcame a one-point deficit with four seconds left on the clock to defeat the Cardinal with a touchdown by making five lateral passes on a kickoff return.

Cal at Stanford on November 17th, 1990: Stanford pulled off an amazing victory, scoring nine points in the final 12 seconds of the game. After a touchdown and a successful onside kick, John Hopkins kicked a 39-yard field goal for the win.

Stanford at Cal on November 18th, 2000: On the only occasion in its history, the Big Game went into overtime. Casey Moore caught the winning touchdown pass to give the Cardinal a 36-30 victory.

Andrew Luck, Former Cardinal quarterback from 2008-2012: After a redshirt year, Andrew Luck led the Cardinal to multiple bowl victories over three dominant seasons. He went on to have a competitive NFL career with the Indianapolis Colts.

Kevin Moen, Former Golden Bears defensive back from 1980-1983: On November 20th, 1982, Kevin Moen received a kickoff for the Golden Bears, who were down by one point with four seconds left in the game. He then made a lateral pass, initiating “The Play” and winning the game.

Why are Cal and Stanford football rivals?

The University of California, Berkeley, and Stanford University are football rivals because of their proximity to one another and the long history of their annual matchup. Both universities are in the San Francisco Bay Area, with Cal in Berkeley and Stanford in Palo Alto. The annual meeting between the teams is known as the Big Game, and it is one of the oldest rivalries in college football, with yearly games being held nearly every year since 1892.

When did the rivalry between Cal and Stanford start?

The rivalry between California and Stanford started the first time the two teams met on March 19th, 1892. The game was organized by Stanford student athletic manager and future US president Herbert Hoover, along with his friend Herbert Lang, the manager at California. The game attracted twice the anticipated attendance, and Stanford won the first meeting 14-10. This wildly popular matchup continued to draw yearly attention, commonly being referred to as the Big Game as early as 1900.

What is the “Stanford Axe”?

The Stanford Axe is the trophy given to the winner of the yearly football game between the University of California, Berkeley, and Stanford University, known as the Big Game. The trophy features a red-painted axe head mounted on a wooden plaque, which also lists winners and scores of Big Games of the past. The winning team holds the trophy on their campus until the next meeting when their opponents have the opportunity to recapture it.