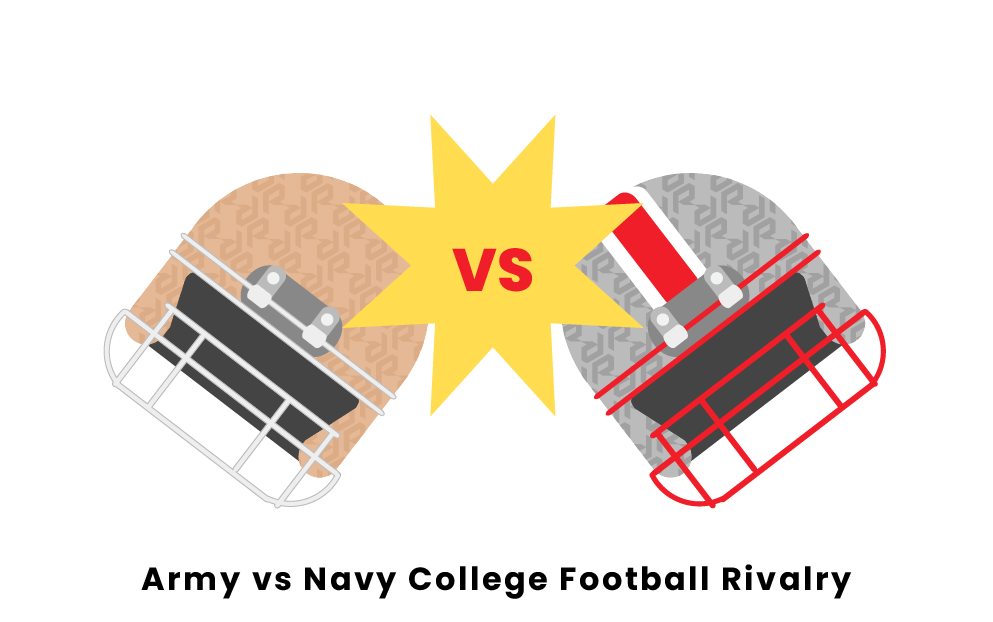 Army vs. Navy is one of the most classic and historic rivalries in college football. However, the rivalry is more than just a football game. It is a pastime for two of the main branches of the United States Armed Forces to come together during one week of the year to compete in an intense and symbolic game. Read on to learn all about this rivalry and its long history!

The yearly game between the Army Black Knights of the United States Military Academy at West Point and the Navy Midshipmen of the United States Naval Academy at Annapolis is one of the oldest running college football rivalries to date. The rivalry began in 1890 with the inaugural game between the two academies. With the exception of a few cancellations, the game has been played every year since 1930.

To some, this game means more than other college football rivalries because of the weight it carries by representing two major branches of the US Armed Forces. The symbolic meaning it holds to students, veterans, and Americans across the nation then only further fuels the rivalry. Many even refer to this rivalry and its yearly game as “America’s Game” as it has etched itself into the very essence of American culture.

The game has become a symbol of the spirit behind the interservice rivalry between the branches of the United States Armed Forces. It contributes to a sense of unity for the American public in many ways. The rivalry extends outside of the annual game itself, with the Commander In Chief Trophy (introduced in 1972) that is given to either the Army, the Navy, or the Air Force, depending on which academy has the best record at the end of the season. While Air Force is included in the competition for this trophy, the rivalry with this academy is not nearly as notable as Army and Navy due to geographical separation.

Army vs. Navy on November 29th, 1890: This was the first-ever game played between Army and Navy after the Midshipmen challenged an Army cadet. The game resulted in a 24-0 blowout win for Navy.

Army vs. Navy on December 7th, 1963: Just weeks after the death of JFK and on the anniversary of Pearl Harbor, Army and Navy continued their rivalry after rumors of cancellation. On a day filled with great emotion, Heisman winner Roger Staubach led the number-two overall Navy to a victory.

Army vs. Navy on December 10th, 2016: On this date, Army overcame a blown 14-point lead to secure victory in an upset over Navy, ending a drought of 14 consecutive losses.

Roger Staubach, former Navy quarterback from 1962-1965: Staubach won the Heisman Trophy award in 1963 and carried Navy to victory in the rivalry game. Staubach went on to be one of the most accomplished QBs in NFL history.

Joseph Mason Reeves, former Navy player from 1890-1894 & Head Coach in 1907: Reeves played in the inaugural Army vs. Navy game, but more importantly, is known for being one of the first players to ever wear a helmet on the football field. Reeves returned to the Naval academy 16 years later as the head coach.

Alejandro Villanueva, former Army tackle from 2006-2009: Villanueva played for Army at several positions during his tenure. After graduation, he became an Army Ranger and served on active duty for four years before beginning his career in the NFL.

Felix “Doc” Blanchard, former Army fullback from 1944-1946: Blanchard led Army to three consecutive national championships and an undefeated record during his three-year college career, winning the Heisman Trophy in 1945. He chose to serve in the Air Force after graduation instead of pursuing a professional football career.

Glen Davis, former Army halfback from 1944-1946: Playing alongside Doc Blanchard, Davis helped lead Army to three consecutive national championships and won the Heisman Trophy in 1946. After serving some time in the military, Davis joined the Los Angeles Rams as a part of two Super Bowl-winning teams.

Why are Army and Navy football rivals?

Army and Navy are natural rivals because of their connection to the United States Armed Forces. This rivalry carries much more weight than traditional rivalries because those who play in this rivalry all share a military identity. When these two academies meet on the field, they bring veterans and the American people together by engaging in the sport that has become a symbol of a long-held interservice rivalry between the branches of the US Armed Forces.

When did the rivalry between Army and Navy football start?

The football rivalry between Army and Navy dates back to the inaugural game between the two academies on November 29th, 1890. It is one of the oldest rivalries in college football. The game occurred as a result of a challenge from the Midshipmen against Army Cadet Dennis Michie, and the two sides agreed to a game on the gridiron. The Naval Academy won this game 24-0.

What caused the longest interruption in the annual Army-Navy game?

The longest interruption resulted from an argument between an Army general and a Navy admiral. It even almost resulted in a duel following the game in 1893. Since 1930, the rivalry game between Army and Navy has been conducted annually with zero interruptions in this remarkable 91-year span. However, since the rivalry began in 1890, there have been a total of 10 cancellations, with the longest span of cancellations occurring in a five-year span from 1894 to 1898.