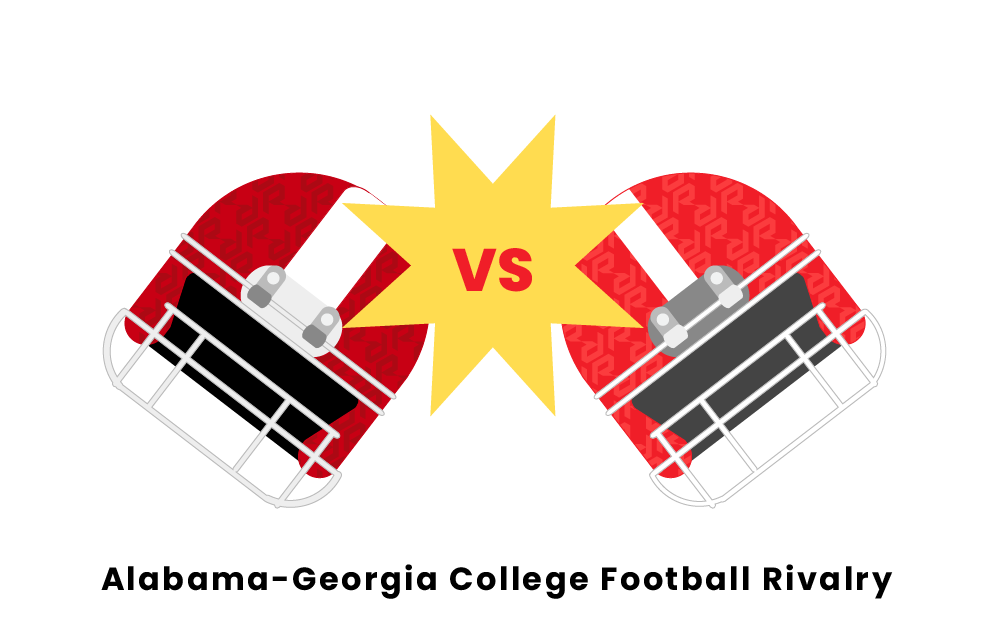 College football is known for its intense rivalries, and one of the oldest rivalries in the history of the sport has existed between the Alabama Crimson Tide and the Georgia Bulldogs. These two teams are among the oldest in college football, and when they face off against each other, the atmosphere never fails to be electric with history and tension. Read on to learn all about this landmark college football rivalry!

Since they play in neighboring states, it’s no surprise that Alabama and Georgia have a history with each other, and that history goes all the way back to November 9, 1895, when the two schools first met on the football field. In that matchup, Georgia took the early lead in the rivalry, winning by a score of 30-6. Since then, there have been 71 meetings between the two teams, and the rivalry has blossomed into one of the most intense in all of football.

Throughout their long history together, the Crimson Tide and the Bulldogs have gone through many ups and downs together. Both teams were among the first members of the NCAA’s Southeastern Conference (SEC), which was created in 1932. The rivalry between them was cemented for nearly 20 years starting in the mid-1940s.

The Crimson Tide and the Bulldogs notably played each other once a season from 1944 to 1965, though outside of those years, they met more randomly. Nevertheless, throughout their rivalry, they have never failed to maintain the heat between their teams. From 1971 to 1982, they dominated the SEC back-and-forth with championship victories. Through the present day, these two teams have continued to provide college football fans with wild and exciting games, securing their place in the sport’s storied history through the rivalry of their two famed head coaches, Nick Saban and Kirby Smart.

Of their 72 meetings on the football field, Alabama has managed a winning record in their games against Georgia. Currently, Alabama dominates the rivalry with a record of 42-26-4. The Crimson Tide and the Bulldogs have only tied four times in their history, in 1901, 1907, 1908, and 1954.

The largest margin of victory in the history of the rivalry belongs to Alabama, who managed to defeat Georgia 36-0 on two occasions, in 1905 and 1923. Alabama also boasts the longest win streak in the rivalry, a seven-game run that lasted from 2008 to 2021. In their most recent matchup, held on January 10, 2022, Georgia won the game 33-18.

Without a doubt one of the most intense games in the rivalry’s history, the 2018 CFP Championship started out well for the Bulldogs, who went into halftime on top 13-0. In the second half, Alabama coach Nick Saban made the gutsy choice to replace starting quarterback Jalen Hurts with freshman backup Tua Tagovailoa. The decision proved to be the right one; Tagovailoa managed to lead the Crimson Tide to tie the game 20-20 at the end of regulation, and in overtime, after a Georgia field goal and a dispiriting sack, the freshman quarterback delivered a monstrous 41-yard touchdown pass on 2nd and 26 to give Alabama the win, 26-23.

In this all-time great matchup, No. 2 Alabama met No. 3 Georgia to contend for a spot in the National Championship against Notre Dame. In this game, after a back-and-forth first half, Alabama went into the locker room with a 10-7 lead at halftime. The second half of the game was equally as tumultuous, but the Crimson Tide kept their lead until it stood at 32-28 with 3:15 to go. Georgia mounted a desperate final drive towards the end zone, and managed to make it to the eight-yard line, but a final touchdown pass attempt by quarterback Aaron Murray only made it to the five-yard line before time expired, handing Georgia a crushing 32-28 loss.

During his first season as the coach of Alabama, the legendary Nick Saban had managed to craft a 3-0 winning record early in the season. Georgia, however, had the same record, and the two teams proved their worth in a game that went to overtime after Saban and Alabama mounted a huge comeback to tie the score at 20-20 with 1:09 remaining. Though Alabama possessed the ball first in extra time, they only managed a field goal, allowing Georgia quarterback Matthew Stafford to clinch the win with a touchdown on the next drive, giving Alabama a 26-23 loss.

Some notable players from the Alabama Crimson Tide have included:

Some notable players from the Georgia Bulldogs have included:

Some notable coaches from the Alabama Crimson Tide have included:

Some notable coaches from the Georgia Bulldogs have included:

Why are the Alabama Crimson Tide and Georgia Bulldogs rivals?

Though they aren’t as big a rivalry as some of the others in college football, the Alabama Crimson Tide and Georgia Bulldogs have a long history. For one, the two teams play in the SEC and are only 70 miles apart, in neighboring states. For another, they have a long record of matchups, at 72 total meetings, which stretches all the way back to 1895. This includes 21 straight years of games against each other from 1944 to 1965.

When did the Alabama-Georgia rivalry start?

The Alabama-Georgia rivalry began on November 9, 1895, when the two teams first met on the field. Georgia won that game 30-6, but since then, Alabama has dominated the rivalry, winning 42 of the 72 matchups, as opposed to Georgia’s 26. The two teams have tied on 4 times, and not since 1954.