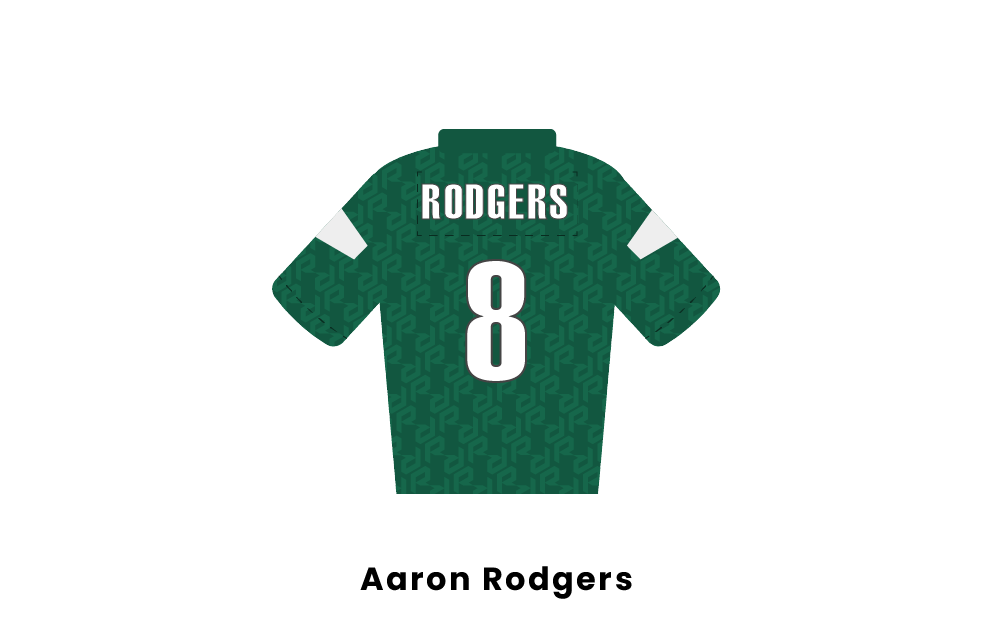 Aaron Rodgers is a California native and a professional football player. His professional career began in 2005 when he was drafted to the Green Bay Packers, but he did not hit his stride until Brett Favre left the Packers in 2008, enabling Rodgers to become the starting quarterback. Rodgers showed his full strength on the field, setting many National Football League (NFL) records for his extraordinary offensive play as quarterback. He was instrumental in the victory over the Pittsburgh Steelers in Super Bowl XLV in 2011 and was rightfully named Super Bowl MVP (and NFL MVP for that entire season). Rodgers has continuously proved his worth for the team, earning a spot on the Pro Bowl team on ten different occasions.

Aaron Rodgers has been passionate about the game of American football ever since he was a child. His athletic career took off when he was recognized by the football recruiting team at University of California at Berkeley after Rodgers’ outstanding plays at his community college. They offered him an athletic scholarship, but he only attended Cal for two years before entering himself into the National Football League’s 2005 draft. During his two years at Cal, he helped his team break multiple school records and was close to winning the Heisman trophy in 2004.

In the 2005 NFL draft, Rodgers was selected as the 24th pick in the first round by the Green Bay Packers. Rodgers did not play much until he became the starting quarterback in 2008. He proved his skills and played all 16 regular season games. Rodgers was chosen for the Pro Bowl team in 2009, and continued to be chosen another seven times within 2011-2019. The Green Bay Packers won the Super Bowl XLV in 2011, with Rodgers leading his team to victory, completing 24 of 39 pass attempts and three touchdowns. After the Super Bowl victory, Rodgers continued to showcase great results, being one of the top players in the league. He has remained with the Green Bay Packers for the entirety of his career.

Aaron Rodgers has been highly regarded as one of the best quarterbacks in NFL history, and his awards demonstrate that. After the Green Bay Packers won the Superbowl in 2011, Rodgers was awarded the Super Bowl Most Valuable Player award for his instrumental performance in victory. Rodgers also set a single season record with a 122.5 pass rating that year and was titled NFL’s MVP.

2014 was also an outstanding year for Rodgers as he crossed into the number one ranking in NFL history for career touchdown passes, yards, and passer rating at the milestone point. That same year, he was titled again as NFL’s MVP. Rodgers won his most recent MVP title in 2021, where he became only the second player with more than three MVP awards behind Peyton Manning’s five MVP titles.

Rodgers also has over 500 passing attempts and fewer than ten interception throws in eight posted seasons, surpassing Tom Brady and Matt Ryan. He also holds the records for the greatest touchdown to interception ratio in NFL history at 3.95.

Aaaron Rodgers grew up in Chico, California, with parents Edward and Darla Rodgers and brothers Luke and Jordan, before moving to Beaverton, Oregon in the 1990s. His family returned to California when Rodgers was a teenager and he attended Pleasant Valley High School and played quarterback on the team. Once on the Green Bay Packers and a prominent figure, Rodgers was in a serious relationship with actress Olivia Munn for three years from 2014-2017 before splitting up amicably. In early 2018, Rodgers and NASCAR race driver Danica Patrick confirmed to the media that they were a couple, but announced their break-up in July of 2020.

In 2005, how much did Aaron Rodgers sign with the Packers for?

After being chosen 24th overall in the 2005 NFL Draft, Aaron Rodgers agreed to a five-year, $7.7 million dollar contract with the Green Bay Packers. This deal included $2.12 million in guaranteed money and the contract stipulated that he could earn as much as $24.5 million if all incentives were met.

What is Aaron Rodgers’ current contract with the Green Bay Packers?

Currently, Aaron Rodgers contract stipulates that over three years, he will receive $150.8 million, with a signing bonus of $40.8 million. His average salary per year is $50 million. He also has a workout bonus included in his contract, which is worth $50,000.

What is Suspended Sunrise Recordings?