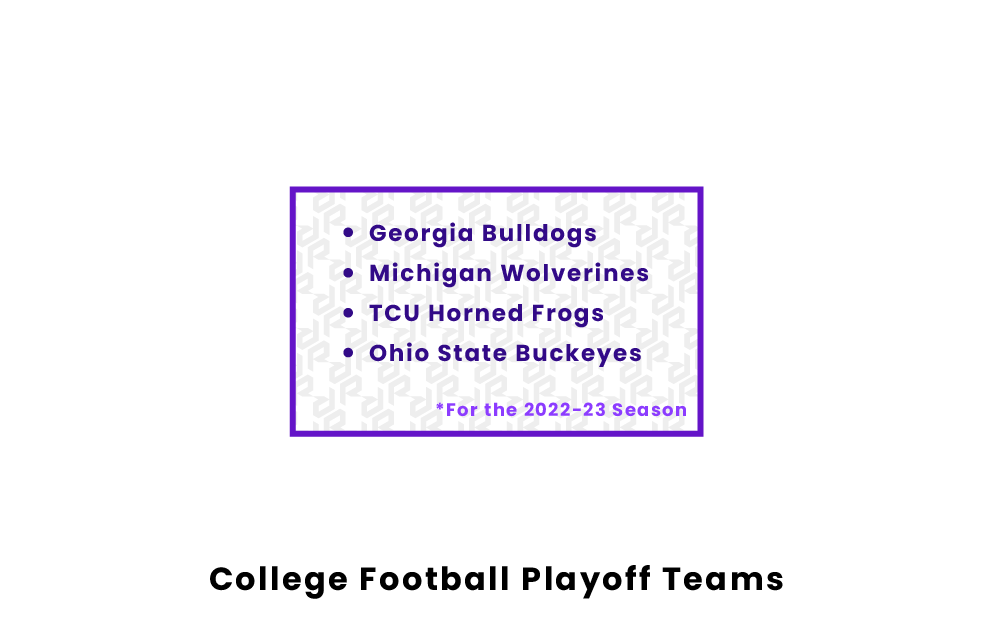 The University of Georgia Bulldogs finished the 2022 season undefeated at 13-0, were SEC Champions, and the number one team in the nation. This is their third time going to the CFP under head coach Kirby Smart, who won the CFP National Championship in 2017 and 2021. The Bulldogs come in as heavy favorites, as they beat several ranked opponents by big numbers throughout the season, including Tennessee, LSU, and South Carolina. They will play the Ohio State Buckeyes in the Peach Bowl.

The University of Michigan Wolverines are the only other 13-0 team in the FBS and recently beat another CFP team, the Ohio State Buckeyes, in the final game of the regular season. This is their first undefeated season since 1997 when they were named national champions by the AP. Michigan beat several high-level teams in the 2022 regular season, including Penn State, Ohio State, and Illinois. The Wolverines will take on the third-ranked TCU Horned Frogs in the Fiesta Bowl.

The Texas Christian University Horned Frogs are the third-ranked team in the CFP after a 12-1 record where their only loss came in the Big 12 Championship against Kansas State. The Horned Frogs beat numerous high-powered teams during the regular season, including Kansas State, Texas, and Baylor. They will face a tough test in the Michigan Wolverines in the Fiesta Bowl, where both teams will fight for a spot in the CFP National Championship game.

The Ohio State University Buckeyes are the final team in the CFP, taking the fourth spot from USC after the Trojans took their only loss in the Pac-12 Championship against Utah. Ohio State was undefeated until the final game of the regular season, where they lost to Michigan and subsequently missed out on the Big 10 Championship game. However, they look to avenge their loss by advancing in the CFP, but will have to get past the top-ranked Georgia Bulldogs first in the Peach Bowl.

What teams are in the 2022 College Football Playoff?

What team is favored to win the College Football Playoff?