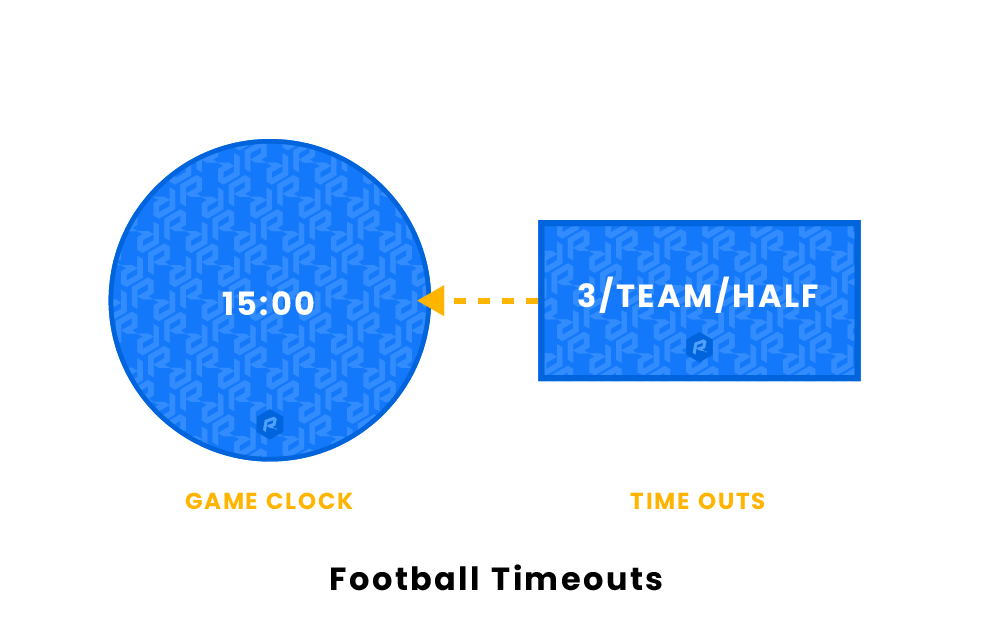 A timeout is when a team stops the clock and game by using one of their timeouts. During a timeout, the teams then have a break to rest, get water, make substitutions, and go over game strategy and play. Timeouts are used to stop the clock in certain situations, as well.

Timeouts are used to stop the game clock from ticking. After a timeout ends, the play clock still ticks and lasts 25 seconds. A coach or player on the field is responsible for calling timeouts.

In college football, each team gets three timeouts per half. Timeouts in college football last about 90 seconds long. Timeouts do not carry over to the second half if they are not used in the first half. Teams do not have to use their timeouts if they do not want to. Timeouts are allowed to be used whenever a team chooses. However, consecutive timeouts are not allowed.

In the NFL, each team gets three timeouts per half. Timeouts in the NFL are about two minutes long. Any unused timeouts do not carry over to the 2nd half. Any or all timeouts do not have to be used. Timeouts are not allowed to be used twice right after each other. It is in the team's best interest to use their timeouts before the half ends.

Timeouts are important because they are a huge part of the strategy of a football game.

Timeouts could also be taken if a play clock is winding down. These types of timeouts are usually called by an offensive team when their offense is not ready to snap the ball before the play clock will hit zero.

Timeouts are also called to stop the game clock if the time is winding down, so a team will have more time to call plays and get closer to scoring.

Reasons To Call A Timeout

A team will use a timeout:

Calling a timeout can conserve time for a team by buying them a few extra seconds to plan out their next moves. Timeouts are opportunities to regroup and save the last few minutes (or even seconds) for play execution.

Timeouts can also be called when a coach wants to change the play or formation in a specific moment. This could be a result of the other team changing formations or new players entering the field. If a team is trailing by a few points at the end of the game, the coach might call a timeout to show the team a new play that might change the course of the game. Other times, coaches call timeouts when his team is struggling and they need to try out other strategies.

A delay of game penalty is called when a team takes too long to start a new play. This is called because it is deemed as unnecessary time wasted from the game that could be crucial when it comes to the winner of the game. A coach will call a timeout to prevent this penalty from occurring.

Icing the kicker can be frustrating for the kicker, which is one of the main reasons why coaches or quarterbacks call timeouts. It rattles the other team's kicker right before performing a kick in the hope that he performs poorly when he actually kicks. Although this kick seems unfair, it is legal to use in football games.

How long are timeouts in football?

College football timeouts are 90 seconds long while NFL timeouts last two minutes. Each timeout is the same length, so coaches do not save longer or shorter timeouts for specific parts of a game. The reason that some timeouts end up being longer is because of commercial breaks when the game is being broadcasted. Teams use their timeouts to rest until a referee tells them that it is time to get ready to play football again.

How does a team call a timeout?

No team can call two timeouts in a row on the same scrimmage down.

Who is allowed to call a timeout in football?

No, coaches are not in charge of TV timeouts. The referees will be notified when a commercial break needs to happen during a game, and when a natural break in play occurs, they will call a TV timeout that lasts up to 2 minutes in length.

Do coaches' challenges take up a timeout?

If the coach challenges a call and the call is reversed because of it, that coach will get their timeout back. If the challenge fails, they lose that time out.