American football, sometimes also referred to as gridiron football, is a competitive ball sport played between two teams with eleven men on the field for either team. The goal of the game is to have the highest score at the end of four quarters of gameplay. These quarters can range in length from 10 to 15 minutes of gameplay, depending on the league’s rules. The game is played on a field that is 100 yards long with 10 yard scoring areas at either end, referred to as end zones. The width of the field varies based on the league as well.

The two teams of 11 men are in opposition. Those who possess the ball for a series, also called a drive, are the offense, and the other team is the defense.

Every game of football starts the same way: there will be a coin toss with the officials and team captains at midfield before a kickoff, where one team will kick the ball to the other. Once the kickoff ends, one team’s offensive unit will take the field, along with the other team’s defensive unit.

The offense must move the ball at least 10 yards downfield in four “downs” (plays) or less, or else the other team gets the ball. Once they reach those 10 yards, the offense gets a new set of downs. The offense is trying to get to the end zone by running and passing the ball, while the defense is trying to tackle them before they can gain yards.

There are some specific actions that players are not allowed to do. These are called penalties and will be signaled by the referees using a yellow flag. The head official will tell the audience what the penalty is via hand signals and a microphone.

If the offense moves the ball all the way into the end zone, they are awarded six points, with a chance for a PAT (point after touchdown), also known as an extra point. This is a short field goal that is worth one point. The offense may also decide to attempt a 2-point conversion instead of an extra point. This is a play run from the three yard-line. Extra points or 2-point conversions are followed by a kickoff to the other team.

If the offense doesn't think they can move the ball, and they are close enough, they may attempt a field goal from their spot on the field. A successful field goal is worth three points, followed by a kickoff to the other team.

If the team on defense manages to push the offense back into their own end zone, they earn two points and the ball gets kicked off to them. 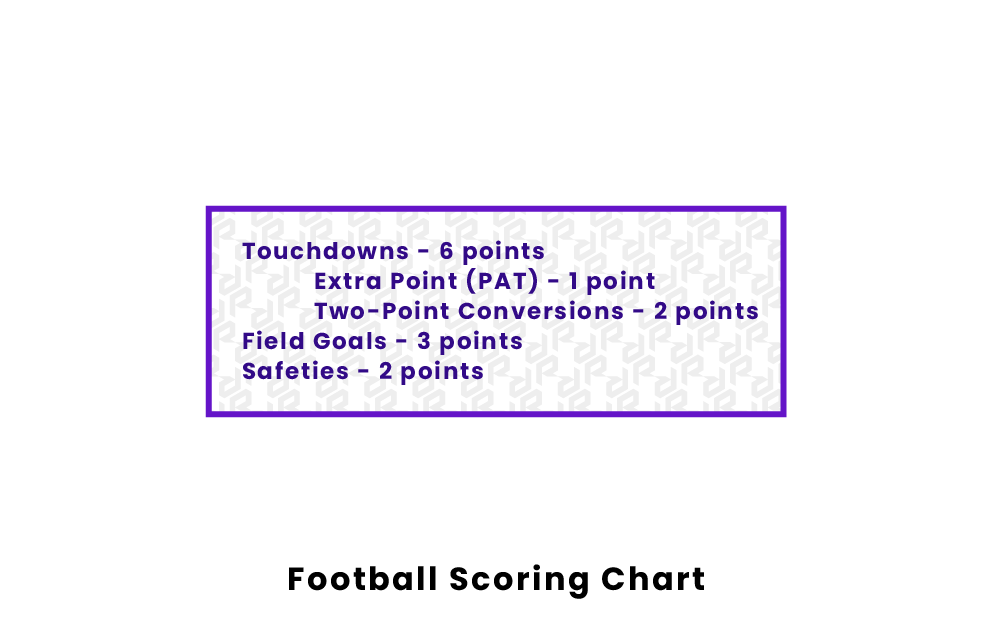