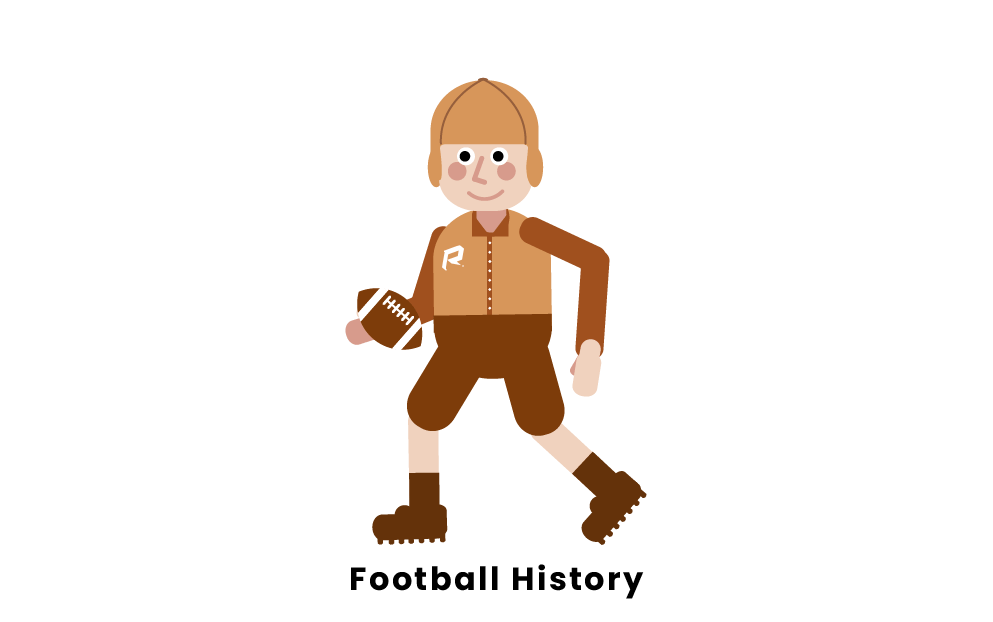 Football is a sport with a rich history, evolving from soccer and rugby into the sport now enjoyed by millions of people worldwide. Read on to learn more about the history of football, including who invented it, when the first professional football game took place, and the origins of college football.

Despite the fact that the sport is commonly coined ‘American football’ to avoid confusion (soccer is often referred to as football internationally), football’s early origins can actually be traced to England during the mid-19th century. Back then, however, the sport was essentially a derivative of soccer and rugby that required players to kick the ball in order to score. The game did not exist at the professional level at this time, and was instead a new concept partaken in recreationally.

The variation of American football that exists today can be linked to Yale University graduate Walter Camp. Often labeled the “father of gridiron football,” Camp introduced a number of ideas that revolutionized the sport. These include the line of scrimmage, a down-and-distance system, and interference rules. Other advancements were rolled out in the following decades, such as the forward pass to create a more unique and exciting style of gameplay. Many of the college coaches that were famous at the time (i.e. John Heisman and Glenn “Pop” Warner) are credited with modern advancements within the game of football.

When was Football Established?

American football was officially established in 1875, marked by the game played between Walter Camp’s Yale Bulldogs and the Harvard Crimson, the sport’s first recorded collegiate football game. Earlier versions of American football were played at the college level earlier than this (such as the widely-claimed “first football game” between Princeton and Rutgers in 1869), but the Yale-Harvard game was the first collegiate game played under the official rules of modern football, rather than a mixture of soccer and rugby rules.

Football emerged at the professional level in 1892, and was solidified as a widely-recognized sport with the foundation of the American Professional Football Association (later renamed the NFL) in 1920.

When Did Football Become Popular?

Football became a popular sport just a few years after the American Professional Football Association (APFA) was formed. While organized football existed primarily in the Midwestern region of the United States to begin with, it rose to national prominence towards the end of the 1920s. Popularity only continued to increase with the signing of talented players, whose bold personalities and spectacular on-field performances stimulated merchandise opportunities (i.e. jersey sales and game-worn apparel).

For a brief overview of the most important dates and events in the history of football, check out the following timeline:

The sport of modern American football is believed to have originated in Europe, from what is now known as “Medieval football” or “mob football.” The main object of this early game was to move a ball from one end of your village to another. There were originally very few rules, and almost any method of moving the ball was permitted (as long as it didn’t kill anyone). Since there were also no limits on the maximum number of players, it was a common sight to have entire villages participating in these heated, high-stakes games. Needless to say, they became bloody, violent, and chaotic pretty quickly.

In the late 19th century, certain standards of play were set in place for intercollegiate competition. The need for standardized rules stemmed from the fact that although intramural games of football were becoming increasingly popular on college campuses, each school had its own distinctive rules of play. This made competitive football matches almost impossible to organize. Finally, on November 6, 1869, Rutgers University and Princeton University jointly drafted a set of football rules, based on a mix of rugby and soccer, that the two schools agreed to play by. These rules governed their first “football” games, which occurred a few years before the first officially-recognized intercollegiate game between Harvard and Yale, which marked the first use of actual football rules. Because of this, the Rutgers-Princeton game is sometimes called the “first-ever” football game, but the game itself was more similar to soccer and rugby than modern American football.

A few years later, in 1875, intercollegiate football players from Harvard, Princeton, Yale, and Columbia convened for the Massasoit Convention. Led by Walter Camp (who is today referred to as the Father of American Football), the members wrote a formalized set of rules that would be adopted and followed by all participating universities. The cornerstones of football, such as the snap, the line of scrimmage, and the “three downs per five-yard rule” (later changed to four downs per ten yards), were introduced here by Walter Camp, and he is considered by many as the “inventor” of American football.

In the early 1920s, college football remained a lot more popular than professional football. Independent team owners were suffering financially, and had come up with the idea to assemble a strong league, like baseball had. With that, the first professional national football league was founded, the American Professional Football Association (APFA), and had Jim Thorpe as its president. In 1922, the still struggling league renamed itself to “National Football League” (NFL). Although the name was already the same, that league was far, far away from the NFL as we know it today.

The NFL had many rival leagues throughout history, but none got close in success until Lamar Hunt founded the American Football League in 1959. He did so because the NFL denied his request to found a new team in Texas. This began an intense rivalry between the AFL and the NFL, which mainly focused on bidding wars over the best college prospects.

With both leagues draining each other of competition, the idea to merge eventually emerged in the late 1960s. On June 8th, 1966, the AFL and the NFL announced an agreement that would transform both leagues in one, with plans of expansion to unrepresented markets. The leagues also agreed to keep separate schedules until 1969 and to then play a winner-takes-all final game where the champions of both leagues would face each other, the Super Bowl. The merger brought popular teams such as the NY Jets, the Oakland Raiders, and the New England Patriots into the league.

Rule Changes in the NFL

In 1933, the NFL proposed its own set of rules of play that were better suited for high-performance competitions, rather than continuing to follow the collegiate rules. The major changes included the introduction of hash marks and goal posts, as well as the legalization of the forward pass (as long as it was made from behind the line of scrimmage).

The first Super Bowl was played on January 15, 1967, between the NFL champions the Green Bay Packers and the AFL champions, the Kansas City Chiefs, owned by AFL founder Lamar Hunt. The Packers beat the Chiefs 35-10 in the LA Coliseum. At the time, NFL teams were considered to be immensely superior to AFL teams, and it was no surprise when NFL teams won both Super Bowl I and II.

However, in Super Bowl III (first to officially use the name), the AFL’s New York Jets (who were huge underdogs) beat the NFL’s Baltimore Colts in what is considered one of the greatest games in the league’s history. That win massively drew the public’s attention, and made the newly merged league surge in popularity.

Today, the Super Bowl has grown to become one of the most highly-watched annual sporting events worldwide. Currently, the Pittsburgh Steelers and the New England Patriots are tied for holding the highest number of Super Bowl wins, at a total of six wins each.

When was the NFL founded?

Where did football originate?

The origins of modern football can be traced as far back as medieval times, but it is thought to have originated from rugby and soccer in mid-19th century England. However, the modern form of football originated at Yale University in the late 19th century, pioneered by Walter Camp.

When was the first Super Bowl?

The first Super Bowl (which is arguably the most important game of football in the world), was held on January 15, 1967. The game occurred at the end of the first joint season of the American and National Football Leagues, which merged in 1966 to become the modern NFL. The two teams that played in this Super Bowl (later named Super Bowl I) were the Green Bay Packers of the NFL and the Kansas City Chiefs of the AFL. Green Bay won the game 35-10.