When watching a football game on television, you may have heard an announcer refer to a running player as “breaking the plane” of the goal line when they are analyzing the replay of a close-call touchdown. What does it mean to break the plane in football? Where is the end zone, and how do you score a touchdown? Keep reading to find out the answers to these questions and more!

In order to score a touchdown in football, a player carrying the ball must enter the end zone. To enter the end zone, that player must cross the goal line and cause the ball to “break the plane.” An airborne player carrying the ball can score a touchdown as long as the ball passes over the plane of the goal line while above or inside of the pylons. (The pylons are the short orange rectangular posts that mark each end of the goal zone.) The rules for scoring a touchdown are the same in NCAA football as they are in the NFL.

There are two end zones in football, one on each side of the field. Each end zone is 10 yards long and 53 yards wide. The white line at the front of the end zone is called the goal line. When one crosses this line, it is considered to be “breaking the plane.” For a touchdown to count, the ball must break the plane of the goal line. As long as the ball touches or breaks the plane while a player is in possession of the ball, a touchdown will be awarded.

How Do You Break the Plane in Football?

Officials stand on the goal line to make sure the ball breaks the imaginary three-dimensional plane of the goal line. These officials are called line judges, and they must judge whether or not they think the football crossed the line during every scoring play.  Luckily, each scoring play is reviewed in the NFL, so the likelihood that the call will be correct is high. 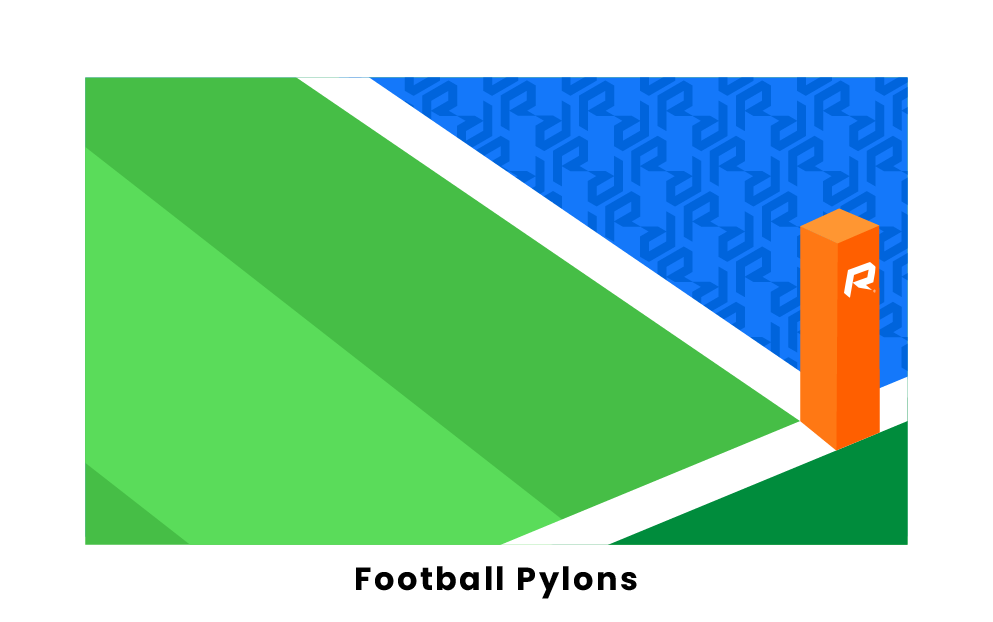 Pylons are positioned at the front corners of each end zone. Officials use the two orange pylons that are on the goal line as a reference point to determine whether or not the ball breaks the plane. Pylons are orange posts that make that determination a bit easier. Players that are nearing running out of bounds may jump and reach the ball over the pylon to score, but the ball must pass above or stay within the pylons for a score to count. A ball that hits the inside of the pylon is considered to have broken the plane.

Many pylons have cameras mounted in them that are aimed directly at the goal line, offering an up-close view that can help officials determine if a ball has broken the plane on a play that is difficult to see.

A coach may throw a challenge flag onto the field if they believe that a mistake has been made by an official. Certain calls and plays permit challenge flags. A challenge instigates a review of play with an instant replay to determine whether or not the ball crossed the goal line. Challenges will either overturn the call on the field or confirm it.

In the NFL, all scoring plays are reviewed, so it is rare for a coach to challenge a score.

As a referee, there are situations where a scoring play is too close to call and must go to an instant replay. The referees are able to watch the play from several different angles while also communicating with upstairs officials to best judge the ruling of the play.

The camera angle that is most helpful when reviewing whether or not the ball broke the plane is one right on the goal line. Other helpful cameras are the one that is straight above the goal line, looking down, and the small cameras built inside of the pylons.

What is breaking the plane in football?

Breaking the plane in football is when the ball crosses the goal line into the end zone. A player must be in possession of the ball for the touchdown to count. As long as the ball crosses the imaginary plane that goes straight up from the goal line, then the team is credited with a touchdown. The plane also counts the pylons at the front corners of the endzone. As long as the ball is above or inside of the pylon and the player is not yet down, the team is credited with a touchdown.

What does break the plane mean?

Does the football have to cross the plane?

Rules on catches are much more complicated and permit different situations when the ball is not required to directly cross the plane.

When did breaking the plane become a touchdown?

The ball has always been required to cross the goal line in order for a touchdown to be scored. In recent years, it has become more common to dive over the pylon and sneak the ball in while one’s body is airborne. Further, with replay growing, the controversy over breaking the plane and making the correct call has become a huge deal.