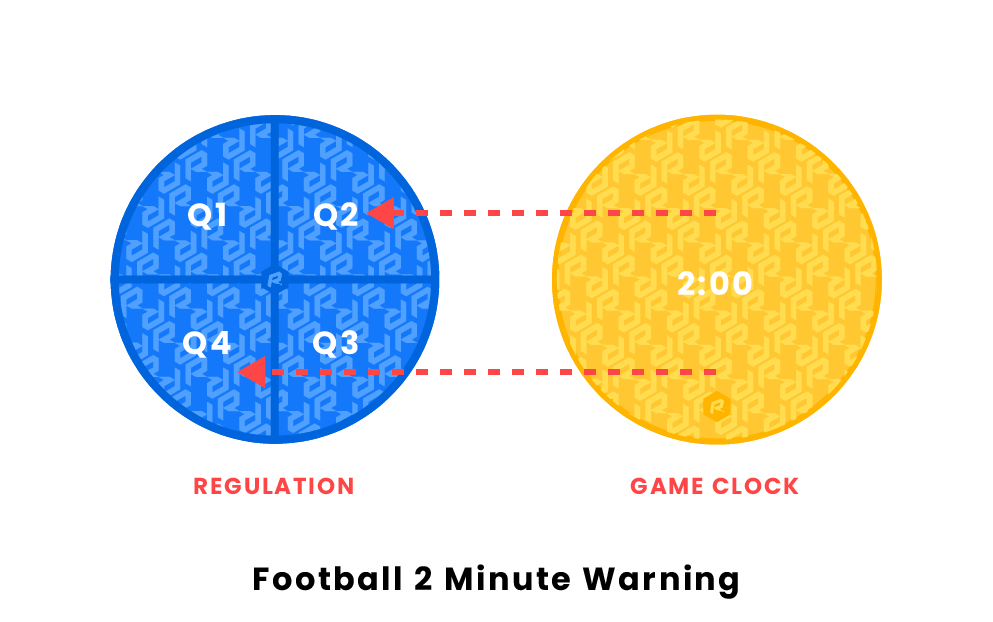 Nowadays, some football fans are unsure why the 2-minute warning still exists, namely because of the fact that most stadiums feature large display screens that show the game clock in a very visible manner. However, before the invention of modern game clocks, management of the game was left entirely to the officials, who utilized stopwatches to keep track of time. Because of this, players on the football field itself often had no way of knowing how much time was left in a quarter, half, or game, as the timepiece was only located with the officials.

In 1942, the NFL officially introduced the 2-minute warning as a means of giving teams a short timeout two minutes before the end of each half. This helped teams who needed to score have an idea of how much time remained in the game, and gave both teams a bit of breathing room to strategize. While the system was not perfect since both teams still spent the rest of the game not knowing how much time remained, the 2-minute warning stuck.

As technology progressed, and stadium clocks eventually became synchronized or merged with the game clock, the 2-minute warning began to seem obsolete, but the NFL retained it as a means of giving teams a strategic point to regroup near the end of a half and enhancing the excitement of the game. It also gave broadcasters an extra window for advertisements.

Stopping the Clock After a Play Ends

When the 2-minute warning hits, it can be a wake up call for the players on the field! The losing team knows that it’s crunch time and there isn’t much time left to make a comeback. The 2-minute warning is a nerve-wracking time for both teams, coaches and all fans, because the course of the game (and the winner) could change in a matter of seconds.

When Does the 2-Minute Warning happen?

The 2-minute warning acts like a timeout before the end of each half of the game. The game clock stops ticking when the clock hits 2:00, unless there is already a play going on. If a play is ongoing when the clock hits 2:00, the clock will continue running, but will stop at the next stoppage in play. The 2-minute warning does not count towards a team's timeout limit, as it is a separate event that is required to occur each half according to the NFL rules.

Does College Football Have the 2 Minute Warning?

Only the NFL has the 2-minute warning. There is no 2-minute warning in college football or in high school football. In college football, the officials are required to inform each team’s coach when there are two minutes left in each half, though this does not stop the clock. In high school football, officials inform each team’s coaches when three minutes remain in a half.

What happened to the 2-minute warning in college football?

Why is there a 2-minute warning in football?

The original purpose of the 2-minute warning was, as the name suggests, to warn both teams that there were only two minutes remaining in the half. Additionally, the two minute warning gives the refs a break to reset and prepare for what could be the most consequential portion of the half. To top it all off, the brief intermission allows players on both sides to briefly catch their breath and reset, with the intention of putting them in position to close out half playing the best football possible.

Is there a 2-minute warning in NFL overtime?

There is a 2-minute warning during NFL overtimes during the regular season. The structure of these intermissions is identical, with the stoppage taking place two minutes before the ten-minute overtime period comes to an end. That being said, overtime can be won by one side or the other before the 2-minute warning has occurred.