What is Surf Fishing? 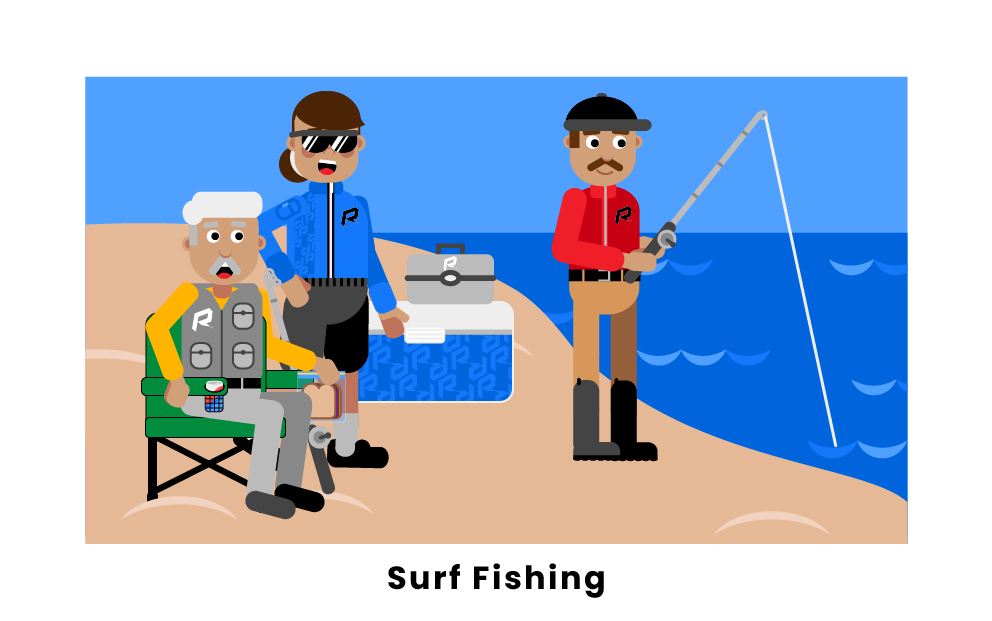 Surf fishing is the practice of catching fish while standing on the shoreline of the ocean or wading in the ocean surf. Though similar to regular fly fishing, surf fishing is a bit more technical, as anglers need to be aware of surf conditions and prioritize distance and accuracy in casting their lines. Surf fishing allows anglers to catch a wider variety of game fish than one might find in freshwater lakes or rivers.

The origins of surf fishing can be traced back to the early 1900’s, before World War II. At the time, surf fishing was largely a sport of the rich, as fishing technology had not advanced enough to make surf fishing accessible to the average person. Early surf fishers would often head to the shores on Sundays, using wooden piers called “stands” to cast their lines and using lobster as bait for the fish, as lobster was plentiful in those days and not considered a delicacy. However, as years passed, fishing technology improved, and surf fishing became more accessible to modern anglers.

Today, surf fishing is included among the other categories of sport fishing, all of which are managed by the International Game Fish Association (IGFA), headquartered in Dania Beach, Florida. The IGFA holds various sport fishing competitions and provides competitors with the IGFA International Angling Rules, which govern proper practices for sports like surf fishing.

What is surf fishing?

Surf fishing is a form of fishing where anglers stand at the ocean shoreline to fish or wade out into the surf. Some surf fishers will place their fishing poles in the sand of the beach and wait for a fish to pull on their lines, while others will wade out into the water and hold their own lines. Surf fishing is more technical than standard fishing, as it requires anglers to be aware of the ocean conditions and be more accurate with their casts. Surf fishing is managed by the International Game Fish Association (IGFA), headquartered in Florida.

What is the largest surf fishing event in the world?

There are many well-known surf fishing events around the world, and one of the largest is The Cape Hatteras Anglers Club Annual Invitational Surf Fishing Tournament. The tournament claims to be the biggest surf fishing gathering of its kind and has won the Guinness World Record for the Largest Surf Fishing Tournament in the world. The event is so exclusive that teams of surf fishers often wait years just for a chance to get into the tournament. The Cape Hatteras Tournament is held yearly in the first weeks of November and has been held since 1958.

What equipment do I need for surf fishing?

Various equipment is necessary to perform surf fishing. It is possible to surf fish with basic fishing gear, but oftentimes, such gear is not ideal for surf fishing, and more advanced equipment is required. Surf fishing rods are often longer than standard fishing rods, being between 10 and 12 feet long, and are ideal if they can withstand moderate to heavy force from surf and large fish. Surf fishing rods should also be moderate to fast action, meaning that they bend less under pressure. 5,000 to 6,000-yard reels are considered best for surf fishing, and 20-40 pound lines are preferred. It is also important to select adequate shock leaders, leaders, sinkers, and hooks. Finally, all other necessary beach equipment, such as water, sunglasses, sunscreen, and proper clothing, is a must-have for surf fishing.

Pages Related to What is Surf Fishing?