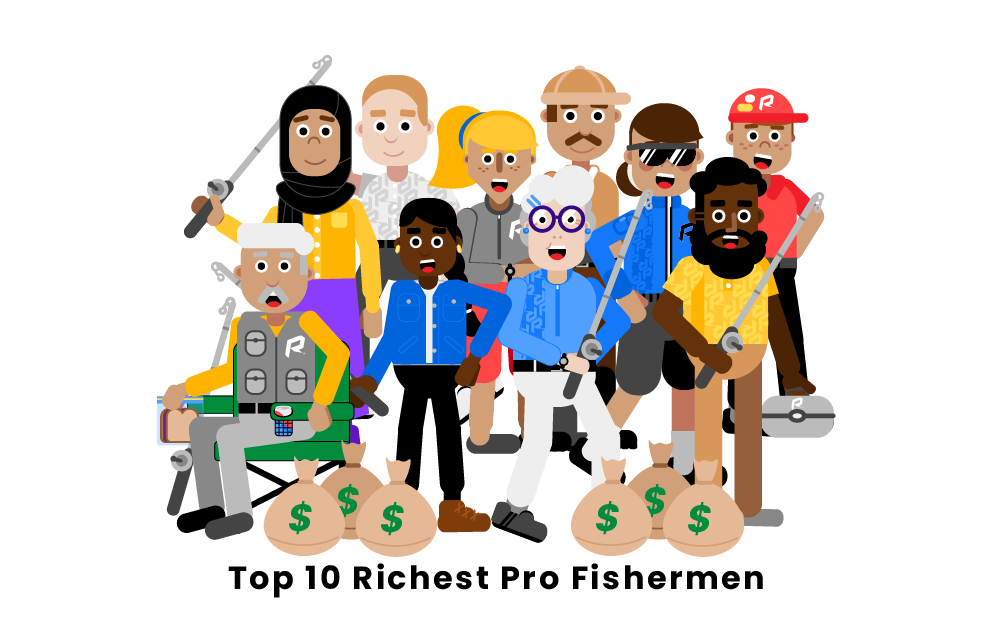 While fishing is best known as a leisure activity, there are also pro fishermen who can make large sums of money with their prowess out on the water. The best fishermen in the world have made a name for themselves amongst the fishing community and set themselves up well financially in the process. Read on to learn more about the ten richest pro fishermen.

Who are the pro fishermen with the highest winnings?

Kevin VanDam is an exceptional professional fisherman from Kalamazoo, Michigan who has made over $7 million. VanDam began his career at B.A.S.S. in 1987. As one of the most successful fishermen of all time, VanDam was inducted in the Bass Fishing Hall of Fame before he was even 50 years old. He has won four Bassmaster Classic Championships, and even won back-to-back years in 2010 and 2011. Additionally, he has earned eight Angler of the Year titles. Holistically, he has 26 first-place victories under B.A.S.S. and has qualified from two Forrest Wood Cups and the Bass Pro Tour.

David Dudley has had a very successful career in professional fishing with over $4.2 million in career earnings. The talented athlete from Lynchburg, Virginia, is the all-time leading prize money winner in the Fishing League Worldwide (FLW) Tour. He won his first B.A.S.S. event on Virginia’s James River when he was 20 years old, and won his second on Smith Mountain Lake about 20 years later. Dudley got first place for the Forrest Wood Cup in 2003 and has received the title of Angler of the Year four times in his career, most recently during the 2019 season. He is currently fishing on the Bass Pro Tour.

Aaron Martens, nicknamed “A-Mart,” is well known for his fishing talents after winning over $3.8 million throughout his career. He is recognized for mastering many fishing techniques while also developing some of his own. The superb athlete from Leeds, Alabama is best known for his four second-place showings at the Bassmaster Classic. He has an elite repertoire of titles from three Bassmaster Angler of the Year Championships, to winning eleven B.A.S.S. events, to 82 top 10 placements. He also acquired an FLW Tour win in 2003 on Wheeler Lake. Currently, he is a part of the Bass Pro Tour amongst the other greats of the sport.

Skeet Reese is an excellent fisherman from Auburn, California that has made waves in the world of fishing while earning around $3.8 million. He is a popular face in the sport and is known for his signature of having a yellow boat and giant truck. He has 11 B.A.S.S. victories under his belt, with his most notable win coming from the 2009 Bassmaster Classic Championship on the Louisiana Red River, and 82 top 10 placements in his career. In 2007, he won the circuit’s Angler of the Year title and was one of the first people to win a tour event outside of the West on a swimbait. Currently, he is a strong competitor in the Bass Pro Tour.

Edwin Evers is a versatile fisherman that has seen great success with reported career earnings of around $3.8 million. Evers has explored many different types of angling, flipping, cranking, sight fishing, and drop shotting. Evers is from Talala, Oklahoma, and started his fishing career with B.A.S.S. in 1997. He has won 13 Bassmaster tournaments over the years and came from behind to win the Bassmaster Classic title in 2016 in his home state for a whopping $300,000. In 2019, he won the Bass Pro Tour circuit’s inaugural Redcrest Championship and has been fishing on the Bass Pro Tour ever since.

Greg Hackney is one of the most diligent fishermen that is part of the tour and boasts a career winning total of around $3.7 million. He started as a phenomenal shallow water fishmen but has since developed into a very well-rounded athlete. With B.A.S.S., he has won 11 tournaments throughout his career and has 85 top 10 finishes. He has also received other awards and titles such as 2014 Angler of the Year. At FLW, he won three tour events, including the Forrest Wood Cup at Three Rivers in 2009. This makes him the only bass angler in history who is a World Champion, Forrest Wood Cup Champion, and Elite Series Angler of the Year. The Gonzales, Louisiana, native is currently a star member of the Bass Pro Tour.

Mike Iaconelli is a resilient fisherman that has made $3.2 million throughout his whirlwind career. The athlete from Runnemede, New Jersey has had several crowning achievements, one of which was winning the 2003 Bassmaster Classic on the Louisiana Delta. He has also had seven additional victories with B.A.S.S. and won the circuit’s Angler of the Year under the Elite Series banner. In 2005, he was successful again as he won the FLW Chevy Open on the Potomac River for a large sum of prize money. He is still fishing on the Bass Pro Tour.

Alton Jones is a fisherman from Lorena, Texas, that has been competing in the B.A.S.S. since 1990 and has winnings of over $3.3 million. The talented athlete has been a large part of the sport for some time and he has several successes to show for it. His most famous victory was from winning the Bassmaster Classic in 2008 on Lake Hartwell in South Carolina, and he has over 50 top 10 placements from his career. It was here that he was praised for his talent and given the opportunity to later visit President George W. Bush. He has a total of seven titles with B.A.S.S. in many different states across the country. Today, he competes on the Bass Pro Tour with his son.

Brent Ehrler is a pro fisherman from Redlands, California who has reportedly won around $3.2 million throughout his career. Ehrler has won eight competitions and also boasts 52 top-10 finishes. He has competed in the Bassmaster Elite Series and has notable victories that include an FLW Cup victory in 2006 and a Toyota Texas Bass Classic title in 2015. Ehrler remains one of the top fishermen and will likely continue to add to his winnings over the next several years.

Jacob Wheeler is a popular fisherman from Harrison, Tennessee, who holds a net worth of approximately $3 million. Wheeler is best known for being the youngest angler to win the Forest Woods Cup, which he did at the age of 21, and for being named the 2021 Bass Pro Tour Angler of the Year. He has a number of partnerships with different companies, including Toyota, Rapala, and Igloo Coolers. Wheeler is still in his prime, so expect him to experience continued success going forward.

Scott Martin has had an exemplary career with a reported total prize money won of $2.9 million. The fisherman is from Clewiston, Florida and is the son of nine-time Bassmaster Angler of the Year Roland Martin. Scott was the 2015 FLW Angler of the Year and was able to win eight other competitions on that circuit. One of these circuits was the Forrest Wood Cup which he won in 2011. Currently, Scott is making a name for himself by fishing in all of the Bassmaster Opens to qualify for the Bassmaster Classic and the Elite Series.

Rick Clunn is a talented fisherman from Ava, Missouri, who has won around $2.7 million throughout his career. Clunn is one of two athletes that has won a total of four Bassmaster Classics during the years of 1976, 1977, 1984, and 1990. He has a total of 16 championship titles with B.A.S.S. including winning two Elite Series tournaments in 2016 and 2019. He won Angler of the Year in 1988. As if this wasn’t enough, he added three tour wins during 1997 and 2000 with the FLW Tour. Clunn is still fishing today on the Bassmaster Elite Series.

Roland Martin is a legendary fisherman best known for his NBCSN show Fishing With Roland Martin, who has won over $1.1 million from fishing competitions. Martin participated in nearly 300 fishing tournaments during his lengthy career, winning 19 tournaments and securing nine B.A.S.S. Angler of the Year titles. On account of his phenomenal career, he was inducted into the IGFA Hall of Fame, the Freshwater Fishing Hall of Fame, and the Professional Bass Fishing Hall of Fame. His television show ran for 22 seasons, spanning from 2000 to 2015, and was a major factor in his overall net worth.

What is the highest paying professional fishing series?

There are several professional tournament series that fishermen can decide to compete in, each with their own unique prize money systems. The most popular and highest paid of these series is the B.A.S.S. Bassmaster series. This series has a grueling schedule consisting of approximately 31 tournaments a year between the months of February and November. All of these competitions vary in location, degree of difficulty, and level of competition.

Who is the richest professional fisherman of all time?

The richest professional fisherman of all time is Kevin VanDam. He began his career with B.A.S.S. in 1987 and has won many competitions and titles since, including the Bassmaster Classic, Angler of the Year, and the Forrest Wood Cup. He has a total of 25 first place finishes with B.A.S.S. and is currently a part of the Bass Pro Tour. His total winnings from a long career of success is estimated to be over $7 million.

How do professional fishermen make money?

Professional fishermen can make money through their participation in tournaments and brand endorsements. Typical Bassmaster tournaments at the highest Elite level of competition are paid around $100,000 for a first place victory, $25,000 for second place, and $20,000 for third place. The amount of prize money for other participants continues to diminish accordingly. In addition, many of the top 150 Bassmaster participants can earn money through sponsorships and endorsements. These deals usually include a mix of free equipment and sporadic payments.

What is the largest amount of money a fisherman has won from competition?

The largest amount of money a fisherman has ever won in a competition was a payout of $4.5 million to Jeremy Duffie. At the 49th Annual White Marlin Open, Duffie and his team aboard the Billfisher reeled in a white marlin weighing 77.5 pounds. For the feat, they were collectively gifted a world record amount of $4,536,926.