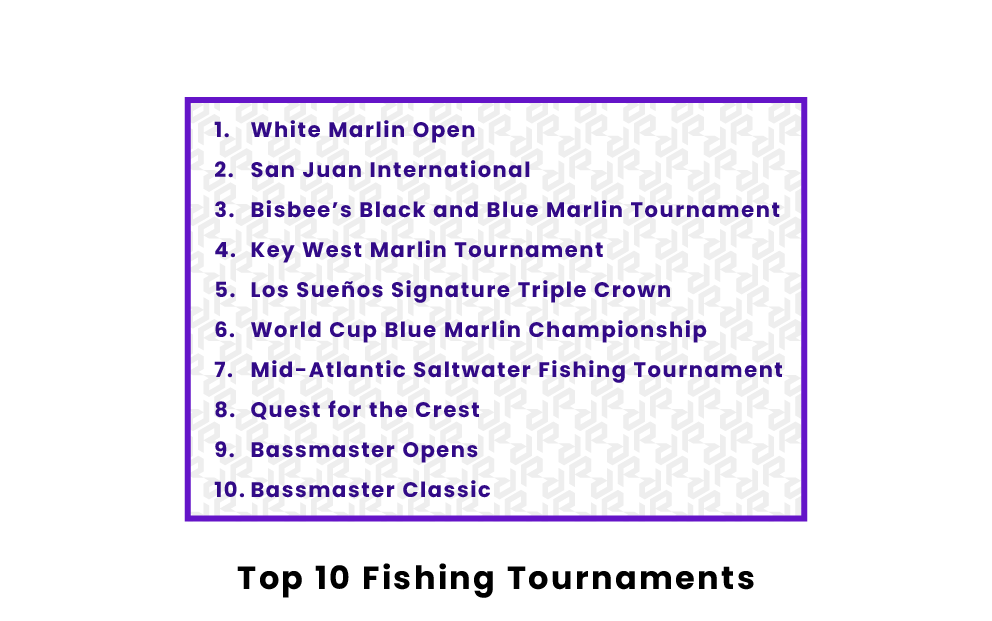 With each passing year, it seems that the allure around professional sport fishing only continues to grow. Between offshore fishing competitions and tournaments on rivers and lakes, the world of competitive fishing is saturated with money. The world's largest and most important fishing tournaments draw thousands of hopefuls who compete for prize purses that can rise well into the millions of dollars. These 10 tournaments are the biggest in the world.

What are the Biggest Fishing Tournaments in the World?

Without a doubt, the White Marlin Open is king among sport fishing tournaments. Located in Ocean City, Maryland, it is by far the most anticipated event in the sport and draws some of the most eager and skilled competitors. In 2021, the massive prize purse of $9.2 million drew well over 3,000 fishermen who spread out across nearly 450 boats. The competitors fish for marlin off of Maryland’s storied coast, and they reel in some of the most handsome fish seen across the entire professional circuit.

In terms of the combination of history, prize pool, and number of competitors that the San Juan International draws, it is practically unparalleled in the world of sport fishing. The San Juan International has been ongoing for decades now, where some of the best fishermen in the world attempt to reel in some of the many prize marlin that reside off the Puerto Rican coast. The tournament is also famous for its legendary parties and the community felt throughout the event.

Perhaps no other fishing tournament can compare to Bisbee’s Black and Blue Marlin Tournament when it comes to sheer excitement. The atmosphere surrounding Cabo San Lucas, Mexico, when the tournament is ongoing is simply unparalleled. The tournament has been known as the “big daddy” of competitions which is appropriate, considering its prize pool amounts to just shy of $4.2 million. In order to get a standard entrance into the competition, competitors must pay $5,000, but it’s totally worth it for the sheer atmosphere of excitement, competition, and partying that comes with the tournament.

When it comes to having a great time both on and off the water, the Key West Marlin Tournament is tough to beat. With a guaranteed prize pot of $50,000, spectacular fishing, and outlandish parties after a long day on the water, this tournament in Key West is one of the most well-rounded fishing competitions out there. And being in one of the premiere fishing towns in all of the United States, the Key West Marlin Tournament is essentially the center of the fishing universe during that weekend in late July.

Situated in lovely Costa Rica, the Los Sueños Signature Triple Crown is the place to go if you’re looking to catch a ton of fish. Perhaps in no other tournament are more fish caught than on the bountiful Pacific coast where the Los Sueños tournament is held. In 2015, 39 boats comprised the competition fleet for the tournament, and over the course of three days, those 39 boats caught and released 2,154 billfish, a simply astronomical total for a sportfishing event.

The World Cup Blue Marlin Championship is completely unlike any other sportfishing competition anywhere in the world. It is unique in that it takes place over the course of a single day: July 4th. It also offers no prize for anyone other than first place, that being the person who catches the heaviest blue marlin during tournament hours on that day. And unlike other competitions, the World Cup Blue Marlin Championship doesn’t take place in a single location but rather all over the Atlantic coast.

One of the most well-loved tournaments in the entire fishing world, the Mid-Atlantic Saltwater Fishing Tournament is an event that’s anticipated by anglers every year. The tournament takes place off the coast of New Jersey, where fishermen compete to reel in a variety of fish species over the course of three days. The prize purse is regularly in the millions of dollars, with prizes paid out to multiple teams and competitors. The 2015 rendition of the tournament saw a purse of almost $3 million, with multiple competitors taking home six-figure prizes.

8. Quest for the Crest

Known as perhaps the most prestigious competition in all of sportfishing, the Quest for the Crest stands alone as the most intense, competitive event throughout the entire competitive fishing calendar. The tournament takes place in a total of three legs, starting in Palm Beach, then moving to Fort Lauderdale, and finally finishing in Miami. One of the awards given to the winners of the tournament is the “crown jewel of sportfishing,” which is a dashing burgundy jacket.

While the saltwater events take up much of the attention in the fishing world, there are freshwater tournaments that also draw massive attendance and sizable prize purses. The Bassmaster Open series, for instance, features tournaments across three regions: Northern, Southern, and Central. Each region hosts three events where anglers compete to catch the highest number of high-quality bass. Each event has a prize purse of $250,000, which adds up to $2.25 million across the nine total events.

In the world of bass fishing, perhaps no other event is as prestigious as the Bassmaster Classic. The tournament is invite-only, which means only the world’s best pro bass fishermen are allowed to attend. The prize purse is consistently over a million dollars, and competition is incredibly fierce. In fact, the event is often thought of as the “Super Bowl of Fishing.” The event is televised and draws huge in-person attendance from fans who want to see the very best anglers compete at the highest level.

What is the biggest fishing tournament in the world?

The biggest fishing tournament in the world is the White Marlin Open, which takes place every year off the coast of Ocean City, Maryland. The event is famous for the sheer size of the fish that are reeled in during the tournament, as well as a prize purse that is well into the millions of dollars. When the tournament takes place in early August, the entire fishing world stops and pays attention. There is simply no event with the same prestige, attendance, and prize money that can equal the White Marlin Open.