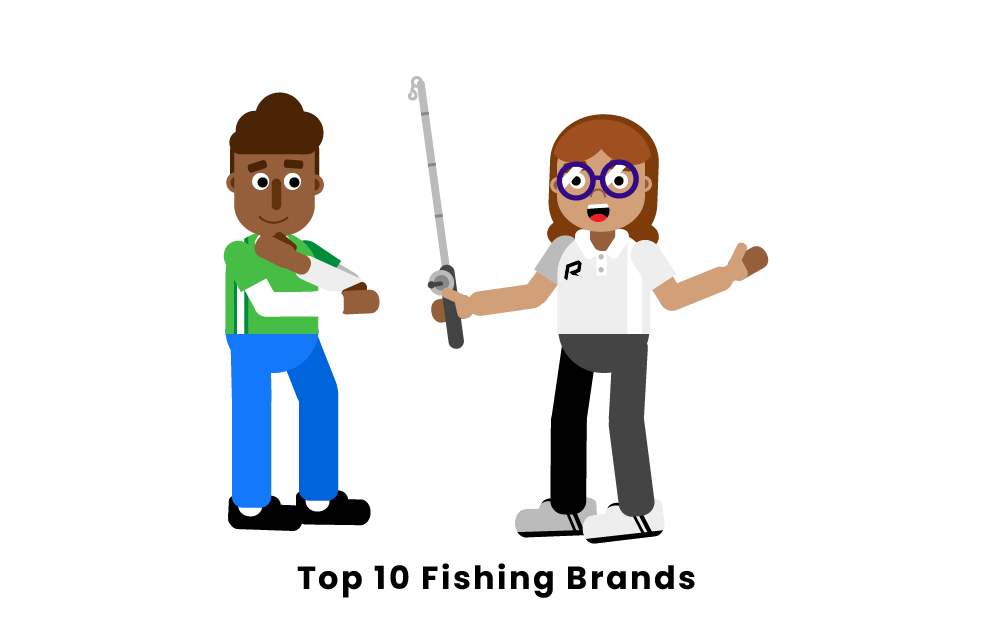 Humans have fished for over 40,000 years as a way to gather food. Nowadays, many people like to fish recreationally. Whether an amateur or experienced fisher, having the correct tools before heading out on the water is crucial. These ten tried and true brands offer high-quality equipment for any skill level.

What are the most popular fishing brands?

Daiwa is known as one of the most influential fishing and tackle companies in the world. They were founded in 1955 and have become extremely popular among anglers of every kind. Daiwa is currently based in Cypress, California, and is a global fishing gear manufacturer, selling tackle across the United States, Canada, and South America. The company focuses heavily on quality and innovation. Their product features, designs, and high-quality materials have become a standard in the fishing industry. Many credit Daiwa with producing the best saltwater fishing rods ever created. Daiwa produces a wide variety of reels, rods, lines, lures, and more. Additionally, they offer product warranties and are available at dealers across the country. Regardless of whether you are a beginner or an experienced fisher, Daiwa can be the company for you.

Shakespeare has been a leading producer of tackle since 1897. With such a long history in the fishing industry, it is no surprise that Shakespeare is number two on this list. Over the years, the company has continued to maintain its excellence, proven by its numerous awards and accolades. Some of their most notable awards include Outdoor Life’s 2005 Editor’s Choice Most Exciting New Design, and ICAST’s Best Kids Tackle in 2011. Shakespeare has a large selection of products, including rods, reels, lines, nets, and apparel. In 2007, they were the first to launch a product line designated for women anglers and donated a percentage of all its sales to the American Breast Cancer Foundation. With such a wide product offering designed for men, women, and children, it's no wonder Shakespeare continues to be so popular.

Penn Fishing was founded in 1932 by Otto Henze in Philadelphia, Pennsylvania. Since then, the company has relocated to Spirit Lake, Iowa, and continues to offer some of the most popular rods and reels in the fishing industry. Penn models hold an impressive 1,400 IGFA world records and have won numerous awards, including the 2006 American Sportfishing Associations Saltwater Reel of the Year. Penn Fishing continues to release new product lines with a focus on innovation and top-notch performance. They provide options for conventional and spinning rods and reels, as well as apparel and other tools. Penn Fishing is well respected within the fishing world and will likely continue to manufacture quality products for the foreseeable future.

Shimano fishing started much differently than most manufacturers on this list. Based in Japan, Shimano Iron Works was founded in 1921 and was extremely well known for producing bicycle parts before they entered the fishing industry in the 1970s. The company has become one of the most popular tackle producers around the world, in addition to its popularity in the cycling market. Shimano prides itself on connecting people to nature through fishing. They make products that cater to angler sensitivity and comfortability. Shimano continues to release new and innovative reel models. Additionally, Shimano offers great options for rods, lures, clothing, and other fishing gear.

Abu Garcia is a Swedish company founded in 1921. It originally manufactured watches and phone parts, but has gone through numerous name and production changes throughout the brand’s lifetime. The company’s focus switched to fishing equipment during World War II, which paid off exceptionally well. Abu Garcia believes in producing tackle that can withstand the toughest of tests. Their products are thoroughly tested and are well respected by customers for their durability and attention to detail. Abu Garcia features one of the largest selections of different types of reels, including the bait cast, conventional, and spinning reels. They also have great options for rods, combos, tools, and clothing. Abu Garcia sponsors some very influential individuals within professional fishing, including Mike Iaconelli, Fletcher Shryock, and Bobby Lane.

Eagle Claw fishing was founded in 1920 in Denver, Colorado. After over 100 years in business, Eagle Claw continues its excellence within the tackle industry. Inspired by the bald eagle, the Eagle Claw brand prides itself on its legacy of integrity and American heritage. They are most well known for their array of unique fishing hooks. Eagle Claw produces high-quality products at very reasonable prices. While their rise to fame came from their production of hooks, anglers also recognize Eagle Claw for its excellent selection of rods, reels, lures, apparel, and much more.

Berkley is a legendary producer of fishing equipment that is well known amongst professionals and beginners alike. The company was founded in 1937 in Spirit Lake, Iowa. Coming from humble beginnings, Berkley credits hard work for their rise to popularity amongst today’s anglers. They are known to produce rods and reels that emphasize stability and strength in the toughest conditions. Berkley covers every need a fisherman may have, whether it be rods, reels, lines, bait, equipment, or apparel. Berkley is heavily involved in professional and amateur fishing. Additionally, they sponsor professionals like John Cox, Hank Cherry, and Keith Carson, who align with the hard work and success that the Berkley brand embodies.

Founded in 1936 in Finland, Rapala has unique origins compared to other world-renowned tackle companies. Rapala is one of the largest manufacturers of fishing equipment, selling over 20 million lures each year in 140 different countries. They are best known for their high-quality lures, but offer a range of products like clothing, spinners, and knives. A unique product that distinguishes Rapala from its competitors is its mass production of balsa wood lures, which is also one of the brand’s top sellers. Rapala is associated with a large number of fishing companies and professionals through partnerships and sponsorships. Some notable associates of Rapala are Activision, the American Sportfishing Association, and Wildlife Forever. Members of their professional staff include Ott DeFoe, Davy Hite, and Mike Iaconelli.

Okuma Fishing was founded in 1986 and is currently based in Taiwan. The company strives to produce quality equipment for anglers at reasonable prices. Okuma reels are considered one of the best in the market, especially for beginners. They sell rods for nearly any setting, including fly rods, float rods, spinning rods, and more. Baitcast, spinning, and trolling reels are among the popular products they offer as well. Okuma sponsors anglers worldwide, making their presence felt everywhere fishing is popular. Todd Kline, Tim Frederick, and Cliff Prince are members of Okuma’s United States professional team. According to their mission, Okuma looks to continue igniting a passion for fishing amongst its current and future customers.

KastKing is one of the newest members of the tackle market. It was founded in 2013 in Syracuse, New York, by a group of young fishing enthusiasts. KastKing seeks to provide affordable innovation to new and experienced fishers alike. Through creativity and state of the art designs, matched with low prices, KastKing distinguishes themselves from their competition. They offer a huge selection of products, including numerous rods and reels, and options for lines, knives, clothing, and other tools. In 2015, KastKing was awarded the ICAST Best of Show award for new product innovation. The company also has a focus on sustainability to ensure the environment that makes fishing so enjoyable can remain intact. After being in business for only seven years, KastKing’s growing reputation for quality and excellence in the tackle market is an impressive feat.

The Clearwater, Florida-based brand got their start in the ice fishing community, but today 13 Fishing makes high quality rods, reels, and lures for all types of fresh and saltwater fishing. The brand is particularly known for its durable, high-strength saltwater reels, which are favored by trophy bass anglers.

A brand owned by the Pure Fishing Corporation, Fenwich specializes in rods designed for freshwater angling with light tackle or inshore saltwater fishing. Fenwick also sells rods for fly fishing and ice fishing. Two of their most popular and durable rods are the Nighthawk and the Eagle.

Lew’s is a tried and trusted brand that has created many of the rod and reel designs that have been emulated across the industry. Since 1940, Lew’s has been making quality rods at great prices. They started with bamboo and fiberglass rods and have continued innovating. Now they sell industry-leading graphite rods, as well as reels and combos.

What fishing brands does Michael Iaconelli use?

Michael Iaconelli is sponsored by a wide variety of brands, some of which are fishing brands and others that are not fishing equipment manufacturers. Two of his more noteworthy fishing brand sponsors are Abu Garcia and Berkley. In regard to Abu Garcia, Iaconelli has 15 signature rods that can be found on Tackle Warehouse. Meanwhile, a lot of the lures Iaconelli frequently uses are produced by Berkley. Each of these major fishing brands have partnered with Mike Iaconelli to help him continue his path of success in the world of fishing.

How much do brands pay to sponsor professional anglers?

While professional anglers typically make around $70,000 per year in prize money, tournament winnings are not the only way for them to make money. Many fishing brands sponsor professional anglers, providing them with money and equipment. Top fishing brands will pay thousands of dollars to anglers to use and promote their equipment. The brands will also provide their anglers with top-of-the-line fishing gear including boats, rods, and other tackle equipment.

What anglers does Daiwa sponsor?

A few of the top anglers sponsored by Daiwa are Brent Ehler, Randy Howell, and Seth Fielder. Daiwa’s Pro Team is stacked with over a dozen professional fishermen that represent the brand. Each of these fishermen has displayed their merit within the sport, with the team as a whole having earned numerous awards and tournament titles. Daiwa’s team features fishermen from across the United States, with member Takahiro Omori even hailing from Tokyo, Japan.