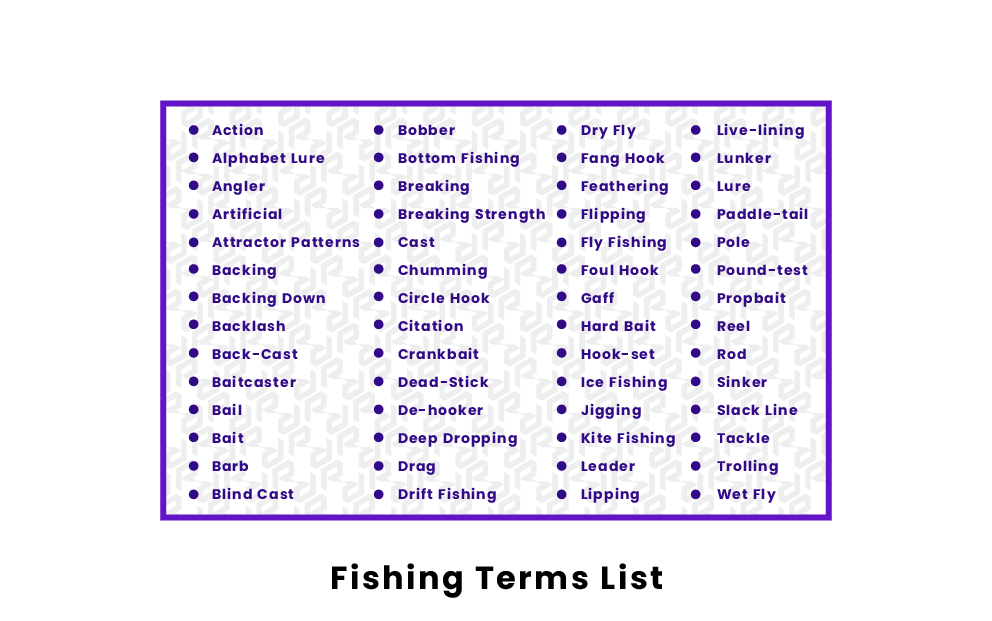 Every sport is unique and has its own list of strategies, techniques, equipment, and rules. As a result, it may be difficult for a beginner to understand the lingo and vernacular that comes with each sport. This is true for fishing as well. This article will help with the slang and common vernacular that one should know if they plan on fishing.

Action: In the context of fishing, action refers to the characteristics in regards to either the flexibility of a fishing rod or the movement of a lure during retrieval.

Alphabet Lure: This lure is a type of wide-body crankbait lure. These types of lures were originally made using wood. An example of this type of lure would be the Bomber Model A.

Angler: An angler is one of the basic terms when it comes to fishing. An angler is someone who fishes; it is a synonym for a fisherman.

Artificial: An artificial refers to any lure that is artificially made (man-made lure). Artificials are used in place of bait.

Attractor Patterns: Attractor patterns refer to a category of flies that are bright and eye-catching. These flies do not resemble any specific insect, but rather a number of insects in general.

Backing: Backing is the technique in fishing where one uses a small diameter braided line, loaded either behind or underneath the main fly line. This helps increase the amount of line, which is important for fighting long battles with fish.

Backing Down: While this term sounds like it would mean giving up on a fish, it actually means to pursue a fish while driving the boat in reverse.

Backlash: When casting or letting out line with conventional reel, backlash will happen when something is pulling on the other end, and the reel spins faster than it lets out line. This leads to a tangle in the line known as backlash.

Back-Cast: Sometimes, fishermen need a little more range of motion when they cast. As a result, they will swing their rod backwards when casting, instead of forward.

Baitcaster: Baitcasters are a type of reel, known as conventional reels, that use a revolving spool as opposed to the revolving bail of a spinning reel. This helps with accuracy as the speed they rotate can be controlled with thumb pressure.

Bail: A bail is the ring of metal that revolves around a spinning reel, in order to reel back in line. The bail is flipped open when the angler is going to cast.

Bait: The term bait in fishing encompasses any object placed on a hook, with the intention of tricking the fish into trying to eat it.

Barb: This is a protrusion at the end of the hook, by the sharp tip. It is used to help hook a fish and to keep it from getting unhooked.

Blind Cast: This is a trial and error technique used for fishing on unfamiliar waters, where the fisherman simply casts in multiple directions.

Bobber: In fishing, a bobber is a small float, which is used to control the depth of the bait or lure. This term is interchangeable with "float".

Bottom Fishing: This is the technique of dropping a bait to the bottom of the body of water. This is done while anchored or adrift, in order to try and catch fish at lower depths.

Breaking: The term "breaking" in fishing is used to describe fish that are in the midst of a feeding frenzy on the surface. This is usually indicated by diving birds.

Breaking Strength: The breaking strength of a fishing line is the amount of weight or pressure it takes to break the line.

Cast: Casting in fishing is the process of swinging the rod while releasing the line, in order to send the bait or lure flying through the air toward the point in the water that the caster aims for.

Chumming: This is the strategy in fishing where the angler drops ground bait into the water in order to attract fish towards the boat or general location.

Circle Hook: As the name suggests, a circle hook is simply a circularly shaped hook, which is used to hook fish in the corner of their jaw.

Citation: Oftentimes citations are awarded to anglers that catch unusually large fish, similar to an award like a trophy or plaque.

Crankbait: This is a lure that has a unique swimming pattern as it is retrieved or pulled through the water by the line.

Dead-stick: In fishing, the method known as dead-stick is the technique of lowering the bait or lure to a specific depth, then holding it still until the fish strikes.

De-hooker: A de-hooker is a tool used by anglers in order to efficiently and easily remove the hook from a fish.

Deep Dropping: This is a style of fishing used to catch fish at deeper depths by dropping the bait or lure down hundreds of feet in the ocean.

Drag: In order to prevent the breaking of a line, a drag is the part of a reel that allows fish to pull out more line when it applies enough force to have the potential to break the line.

Drift Fishing: This is a tactic some anglers employ in order to catch more fish. This tactic is done by allowing the boat to drift while fishing.

Dry Fly: This is a type of lure used in fishing that is made to sit on top of the water. This causes it to remain dry, giving it its name.

Fang Hook: This type of hook is made by bending or welding two hooks together to make one hook.

Feathering: This is a technique used during casting where the angler uses their hand to stop or slow the line from spilling out.

Flipping: This is a method for casting short differences, where the lure is swung back and forth and eventually flipped to the targeted location.

Foul Hook: This is a term used to describe a fish that has been hooked anywhere except for the mouth of the fish.

Gaff: A gaff is a tool used to pull fish over the side of the boat. It consists of a large hook mounted on a pole, or in the case of a fish strong enough to pull the pole out of an angler's hands, the hook is tied to a thick rope that is then fastened to the boat.

Hard Bait: In fishing, hard bait is any lure that is made with hard materials, including metal or plastic.

Hook-set: This is the technique used when a fish bites that involves jerking the rod back as the bite occurs in order to securely hook the fish.

Ice Fishing: This is the practice of cutting a hole in the ice of a frozen body of water, in order to fish through it.

Jigging: Jigging is the method of moving or jiggling the rod in order to create life-like motion in the lure or bait.

Kite Fishing: This is the practice of using a kite to suspend a lure or bait on the line far from the boat.

Leader: A leader is a length of heavier line that connects the hook to the rest of the line. This is done in order to prevent abrasion or the severing of a line due to the teeth of fish.

Lipping: Lipping is a method of holding and controlling a fish with dull teeth, by inserting your thumb into its mouth and squeezing down on the lower jaw or lip. This does not work for fish with sharp teeth as they can harm your thumb.

Live-lining: This is the method of using live bait on the hook while fishing, in order to trick fish into biting.

Lunker: A lunker is a term used to describe an extremely large fish.

Lure: The term lure describes any bait that is artificial. Lures are used in place of actual bait in order to attract fish.

Paddle-tail: A paddle-tail is a soft plastic lure with a tail shaped like a paddle, that wiggles back and forth as it moves through the water.

Pole: While many think of fishing poles and rods as one and the same, fishing poles are actually the simplest form of a rod, and consist of a pole with the line tied off to the end.

Pound-test: This is the rated strength of a fishing line. The rating comes from the level of weight that will break the line.

Propbait: This is a type of lure that has small propellers that rotate as the lure moves and is dragged through the water.

Reel: A reel is a mechanism that is attached to the fishing rod towards the bottom that allows the angler to let out and reel in line.

Rod: This is the tool that is primarily used in fishing that the angler holds, in order to control the line connected to the lure or bait. It consists of a pole with "guides" or eyes that the line runs through, along with a reel that allows the angler to release and reel in line.

Sinker: In fishing, a sinker is a type of lead weight that is used to submerge the bait or lure to a specific depth.

Slack Line: This is a term used to describe fishing line in the water when there is no tension or pressure on it.

Tackle: The term "tackle" encompasses any and all gear or tools that are used in order to fish.

Trolling: Trolling is a fishing technique done by dragging the lure or bait through the water from a moving boat.

Wet Fly: This is a fly that is intended to sink below the surface, used for fly fishing.