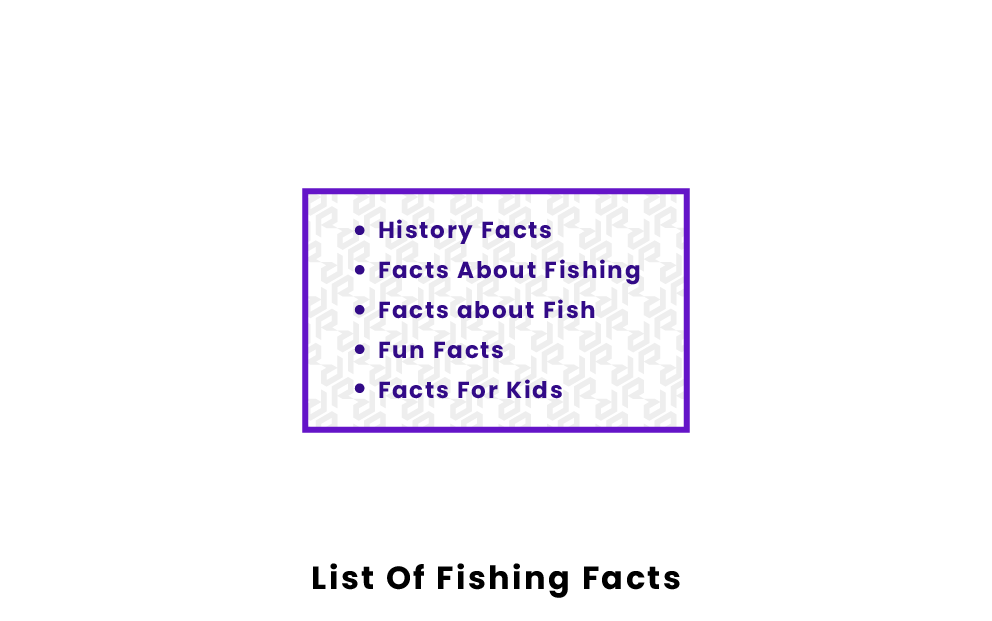 Fishing has been around as a pastime for many, many years. It is an activity that was originally used for survival, but is now also a sport. There are many key elements to fishing and fish. In addition, it has a rich background and lots of facts; let’s learn about some of those key facts below.

Fish fossils were found by archaeological dogs that show Homo Habilis, and then Homo Erectus, were the first fisherman around 500,000 years ago.

Fishing really started to develop after the appearance of Homo Sapiens during the Paleolithic period, which was between 40,000 and 10,000 BCE.

The practice of fishing that was mainly used hundreds of thousands of years ago was subsistence fishing. This type of fishing consisted of catching fish by hand or by using tools made from natural materials.

Ancient Greeks considered fishermen to have a very low status, so there were not many fishermen during this time in art.

In Europe during the Middle Ages river fishing was strictly regulated for people in religious communities whose diets were for fasting.

During the 11th century, ponds were starting to be constructed. This was the start of fish farming.

The first mention of recreational fishing dates back to the 15th century.

In the 18th century, recreational fishing was reserved for the weather classes. Once technological advancements enabled better equipment, it became more accessible due to lowered costs.

In the 19th century, boats started to become bigger and more powerful, so there could be bigger nets for deep water.

Steam boats had first arrived in the 19th century.

During the first half of the 1900s, rods started to become shorter and lighter.

The rods were originally split bamboo, but were replaced by fiberglass.

There are around 27,000 living species of fish around the world, and 6,000 of those species can be found in Australian waters.

There are two types of fishing categories. There is sportfishing and commercial fishing.

Fishing can be a full-time profession.

Fly fishing is considered one of the most popular styles of fishing. It was formed around 200 CE.

Catfish are known to have more taste buds than humans do.

Most species of fish use their eyes to spot food. Some fish are able to see microscopic food like Plankton.

The location of fish’s eyes are at the top of their head. It results in there being a tendency to eat prey that is above the fish.

Fish are unable to see anything directly behind themselves or anything below their head.

There are many species of fish that are able to see at night. While there are also other species that can barely see in darkness.

Some species of fish have an extreme sense of smell.

Fish typically use their sense of smell to find food, but they use their taste buds to determine if they want to eat the object in their mouth or spit it out.

A fish’s taste buds are not always located in a fish’s mouth. For example, a catfish has 175,000 taste buds spread all over its body, with another 20,000 inside its mouth.

Most species of freshwater fish in North America reproduce at least one time a year.

When fish reproduce, they normally produce tens of thousands of eggs, but only a very small percentage make it to adulthood (for example 1 in 10,000).

Catfish can taste and smell with their skin.

Some species of fish don’t just spend time in water, some can “fly” short distances.

97% of all known fish reproduce by laying eggs.

The heaviest fish caught on record was a 2,664-pound great white shark in 1959. It was caught off the coast of Australia by Alfred Dean of Irymple.

The fastest fish caught was able to take out 300 feet of line in three seconds. It equaled a velocity of 68 miles per hour.

The most consecutive catches made was 6,501 times in 24 hours. This record was made by Brent Olgers of Macon, Georgia. This amount of catches is equivalent to 270 casts per hour.

There are around 38 million fisherman and fish farmers in the world.

India produces the second largest amount of fish in the world.

The hungrier the fish is, the easier it is to catch.

Many seagulls are killed due to fishing.

The World’s Fishing Industry spends around a total of $124 billion every year.

10% of the world’s plastic waste in the ocean comes from the pollution of the fishing industry.

Anglers spend an average of $35 per day.

One of humankind’s earliest tools was the predecessor of the fishhook. It is a gorge that is a piece of wood, bone, or stone that is around 1 inch and is pointed at both ends. The gorge would be covered with some sort of bait. If the fish eats the bait cast, the fish would get caught on the gorge, then a pull on the line would wedge it across the gullet of the fish, and the fish would then be pulled in.

Some professional associations of bass anglers have their own competitions that are broadcasted on cable television.

Fishing can be done in the sea, lake, or river, and by boat or from the shore.

Fish can be found in several different kinds of water. Some fish even live high up in mountain streams.

A person who practices recreational fishing is called an angler.

The traditional fishing method uses a fishing pole, reel, line, and a hook with artificial bait.

Some techniques for catching fish include hand gathering, spearing, netting, angling, and trapping.

Fish have gills that extract oxygen from the water around them.

Fish have scales on their entire body with slime covered on them. The slime helps them move through the water.

Some fish use camouflage to hide themselves on the ocean floor to protect them from predators.

Compared to other animals, fish have very small brains.

Ice fishing is a kind of fishing that occurs on bodies of water where the surface is frozen. The angler uses the same equipment that would be used with regular fishing, except they need other special fishing equipment to make a hole so they can break the frozen surface to fish.