What Is Rhythm Dance In Figure Skating? 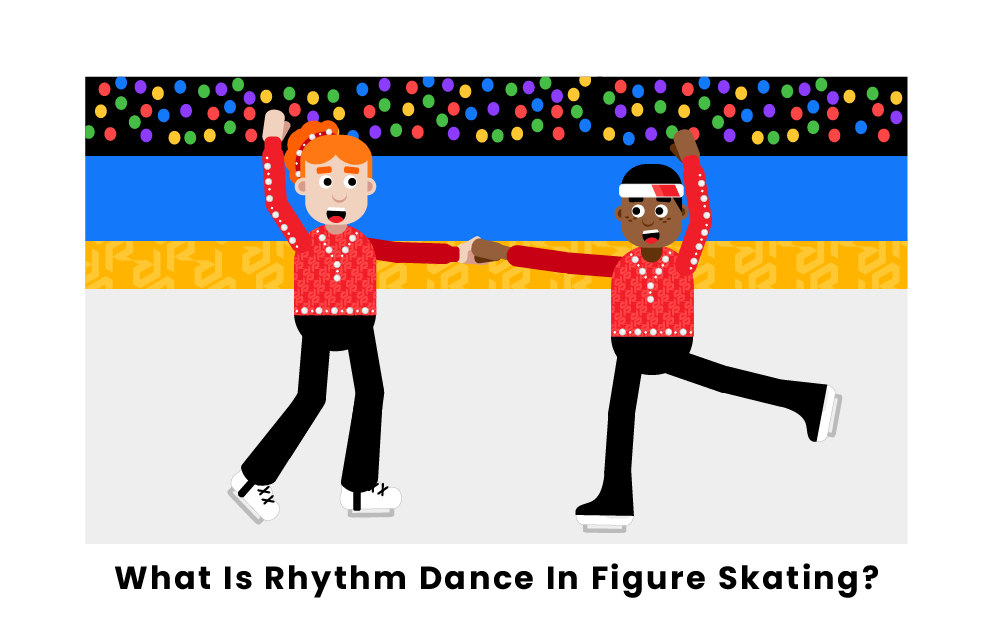 Rhythm dancing is the first of two segments of the ice dance discipline of figure skating, the other being free dance. Ice dance as a whole takes inspiration from ballroom dancing, putting a lot of emphasis on musicality and rhythmic literacy, but rhythm dance is the more technical segment of ice dance, showcasing each competitor’s technical ability to lay a foundation before moving on to the more creative and personal segment of the competition. Read on to learn more about how rhythm dance is skated and scored!

How Does Rhythm Dance Work In Figure Skating?

Rhythm dance is done in pairs, typically with one male and one female ice skater. Skaters perform to a predetermined piece of music that requires them to dance to a specific rhythm and tempo, with lifts and step sequence requirements that must be met as well. The program must be at least two minutes and 40 seconds and no longer than two minutes and 50 seconds, and the music must be between 86 and 96 BPM. In the past, rhythm dance (formerly known as the compulsory dance) was much stricter, with competitors needing to follow the exact same choreographed program in order to directly compare each team’s technical ability.

The name and requirements of rhythm dance were permanently changed after the 2010-2011 ISU season. Instead of having the exact same program, the competitors would have to create a program within a set style of music and rhythm. They would still have a required pattern of steps, but they can choose where in their program they incorporate them, allowing more variety and creative freedom to an otherwise technical segment of the competition.

Additionally, the rhythm dance portion has a set musical theme, chosen each season by the International Skating Union (ISU). For the 2021-2022 season, the theme was “street-style,” and competitors had to incorporate two different rhythms derived from street music and dance, leading to many performances inspired by hip-hop, disco, rock, etc.

How Is Rhythm Dance Scored?

The rhythm dance segment follows the same scoring system as other types of figure skating, determined by the International Judging System (IJS). The categories for rhythm dance scoring are skating skills, transitions, performance, composition, and interpretation of music. There is the Technical Element Score (TES) and the Performance Component Score (PCS). The TES is determined by the difficulty of steps and how well they are executed. Each team is given a score known as the Grade of Execution (GOE). It is a value between -5 and +5, depending on the quality of the execution in relation to the base score. The PCS awards points from 0.25 to 10.0, in increments of 0.25, based on performance aspects of the routine. The highest and lowest scores from judges for both aspects are thrown out, and an average is taken from the remaining scores.

In ice dance, the scores from the rhythm dance and free dance portions are combined to create a final, cumulative score. In rhythm dance, a point is taken off for every five seconds the program runs over two minutes and 50 seconds, or below two minutes and 40 seconds, two points are taken out for incorrect rhythm or an inaudible beat, and one point is taken off for tempo violation.

Pages Related to What Is Rhythm Dance In Figure Skating?