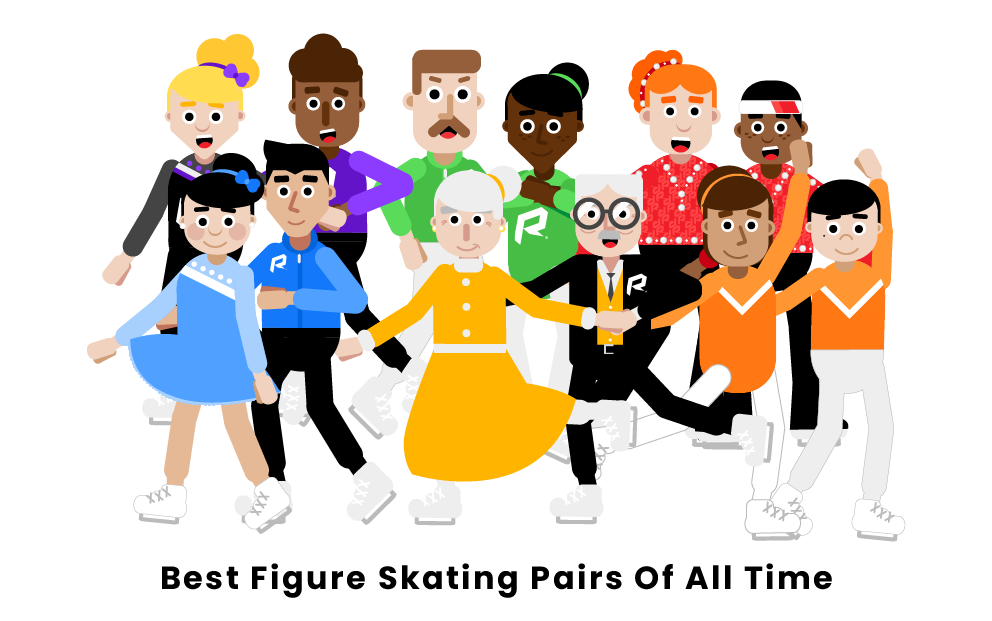 Pair skating is a form of figure skating in which two skaters harmoniously perform together on the ice. Due to the codependent strength, trust, and timing necessary for lifts, spirals, and partner-assisted jumps, a great partnership is pivotal to success in this sport. Listed below are six of the best figure skating pairs of all time.

Who are the best figure skating pairs of all time?

Lyudmila Belousova and Oleg Protopopov, known famously as The Protopopov’s, are the most historic figure skating pair of all time. After an initial rocky few years on the international stage, the married couple won their first World Championship in 1965. From then on, they had uninterrupted success with three further World Championships. In both 1964 and 1968, they won gold and began a new era of dominance by the USSR in the Olympic pairs skating event. Besides their superb record, the Protopopovs are best known for introducing a new style of pairs skating based on Russian ballet and creating several new moves still used today.

Thanks to their stellar record, Aliona Savchenko and Robin Szolkowy are among the best figure skating pairs of all time. After winning three national championships in their native Germany, the pair won their first European championship, Grand Prix championship, and won bronze at the 2010 Olympic Winter Games. During this time, they became famous for scoring the first 10.0 ever given by a judge using the official ISU Judging System. By the end of their career together, they won eight German National Championships, five World Championships, and two Olympic medals, making them easily one of the best skating pairs of all time.

Thanks to a series of record firsts and excellent international showings in general, one of the best figure skating pairs of all time is Xue Shen and Hongbo Zhao. With their win at the 1998 Grand Prix Final, Shen and Zhao became the first Chinese pair to medal at an ISU (International Skating Union) event. After three more years of success, they won gold at the 2002 World Championship, becoming the first Chinese pair skaters to do so. After two Olympic bronze medals (2002, 2006), six Grand Prix Final wins, and three World Championships, Shen and Zhao became in 2010 the first Chinese figure skaters to win an Olympic gold medal. Thanks to their record-breaking success, the pair retired as legends.

Alexa Scimeca Knierim and Chris Knierim, another married legendary pair, are among the best that have graced the ice. With a bronze medal in the 2014 Four Continents competition and a U.S. National Championship in 2015, the pair began their skating career together on a strong note. They proceeded to improve with three Grand Prix medals, a silver medal at the 2016 Four Continents, and two further national championship titles. Their careers peaked at the 2018 Winter Olympics, where the Knierims became the first American pair, and second pair ever, to land a quad twist on the Olympic stage. Though Chris Knierim then retired due to age and injury, the couple had already made their mark.

Though they started their illustrious skating careers with other partners, Madison Chock and Evan Bates began skating as a pair in 2011. After only a few years together, they medaled at silver in the Grand Prix Final and qualified for the 2014 Winter Olympics. Though they did not place that year, they went on to win their first U.S. National title in 2015. Over the next five years, the pair won two Four Continents Championships, continuously medaled in other international competitions, and won two further U.S. National Championships. With a silver medal in the 2022 Olympic Games team event, Chock and Bates have secured their legacy as one of the best figure skating pairs of all time.

Since they began skating together in 2005, Penny Coomes and Nick Buckland were a figure skating pair to watch. After over half a decade of success on the junior circuit, the couple began competing at the national level and won their first British National Championship in 2012. They continue this feat with four other golds at the British National Championships (2013, 2014, 2016, and 2018) plus seven medals on the international circuit. Though they never placed on the podium, the couple also competed thrice in the Winter Olympics in 2010, 2014, and 2018. After a series of medical issues, the couple retired after their last Olympic showing, but their legacy as one of the greats continues.

Who is the greatest figure skating pair of all time?

The greatest figure skating pair of all time is undoubtedly Lyudmila Belousova and Oleg Protopopov. Besides their outstanding record of World Championship wins and two Olympic gold medals, the Protopopovs are most known for issuing in a new era of paired figure skating by not only beginning a reign of Soviet dominance in the Olympic Games but also introducing a new romantic style of paired skating and novel accompanying moves including three new death spiral techniques.

What figure skating pair holds the record for the most Olympic gold medals won?

The figure skating pair that holds the record for most Olympic gold medals won is Tessa Virtue and Scott Moir. Starting with a gold pairs medal at the 2010 Olympic Games, the skating couple ended their illustrious career with a personal best score and two golds in 2018. With a total of five medals, two golds for ice dance and one gold for the team event, Virtue and Moir are the most decorated Olympic figure skaters of all time and also the most decorated ice dance team in Canada’s history in the sport.

What figure skating pair has won the most World Figure Skating Championships?

The figure skating pair with the most World Figure Skating Championships is Irina Rodnina and Alexander Zaitsev. From 1973 to 1978, the married pair represented the Soviet Union and won each successful World Championship title. Thanks to the pair’s double wins at the Olympics and her years of award-winning success with partner Alexei Ulanov, Irina Rodnina is technically the most decorated skater in the history of paired figure skating.

Pages Related to Top 6 Figure Skating Pairs of All Time