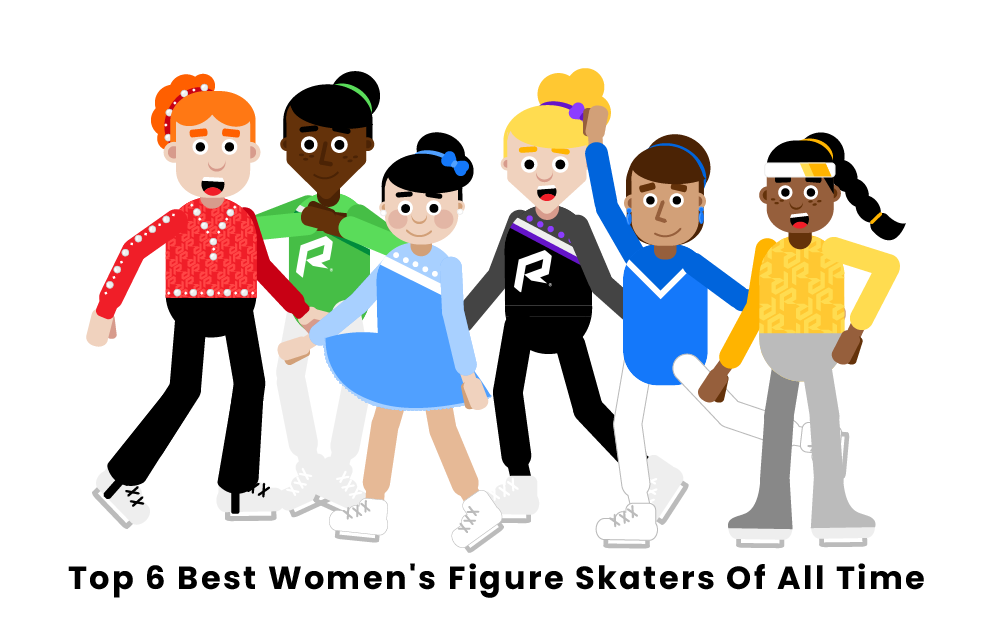 Figure skating is one of the most well-known winter sports and is particularly notable for its distinction as an Olympic sport. Figure skating is one of the oldest Olympic sports, debuting the 1908 Summer Games in London before being transferred to the Winter Games in 1924, where it has remained to the present day. Many great athletes have participated in figure skating at the professional level, both in the Olympics and outside of it, and among these, many female figure skaters have achieved singular status for their skills and grace on the ice. Below is a list of the top six best women’s figure skaters of all time.

Who are the best women’s figure skating athletes of all time?

One of the greatest figure skating athletes due to her sheer will and natural skill, Sonja Henie was a Norwegian figure skater who first rose to prominence in 1924. In that year, she made her Olympic debut at the first-ever Olympic Winter Games in Chamonix, France. Henie’s debut was notable because she was only 11 years old at the time, making her one of the youngest Olympic competitors in history. Due to her youth, her debut was somewhat awkward, and she interrupted her free skating routine with a number of visits to the sidelines for advice from her coach, which resulted in her coming in last place at the competition. However, Henie did not give up her dream.

Just two years later, in 1926, Henie’s skating had improved drastically, allowing her to come in second place in that year’s World Championships. In 1928, Henie won her first Olympic gold medal at the St. Moritz Winter Games after winning the votes of six out of the seven judges. Her win proved to be the first of many, including ten World Championships and two more Olympic gold medals, all won before 1936. In 1932, she was the unanimous choice of the Olympic judges for the gold medal, and in 1936, a week after winning her third gold at the Garmisch-Partenkirchen Winter Olympic Games, she won her tenth World Championship. Henie became such a popular figure skater that police often had to be employed to hold back crowds at her appearances across the world. After ending her professional skating career, Henie became a Hollywood movie star, featuring in films such as Thin Ice (1937) and Sun Valley Serenade (1941). She also went on ice show tours to increase the worldwide popularity of figure skating.

Another prominent skater both on and off the ice, Katarina Witt dominated her sport for nearly a decade. Representing her home country of East Germany, she won two Olympic gold medals, first at the 1984 Sarajevo Winter Games and second at the 1988 Calgary Winter Games. This second win was a close one for Witt, as she actually lost her free skating competition. However, as a result of her performances in the compulsory figures and the short program, the judges awarded her the gold, making her the first repeat gold medalist in women’s skating since Sonja Henie. In addition to her Olympic wins, Witt has successfully won four World Championships, six European Championships, and eight National Championships in skating, completing what she refers to as her “2-4-6-8” victories.

After her professional skating career, Witt went on to perform as a co-star of “Witt and Boitano Skating,” an ice show she headlined alongside famous U.S. Men’s skater Brian Boitano for three years. The show was extremely successful, becoming the first skating show in the prior ten years to sell out Madison Square Garden. Afterward, Witt went on to enjoy a successful acting career, starring in films such as Carmen on Ice (1990), Jerry Maguire (1996), and Ronin (1998), as well as TV shows such as the acclaimed sitcom “Frasier” (1993). Witt returned to skating in the 1994 Lillehammer Winter Games but did not place, although her performance was a crowd-pleaser. In 1995, she was officially inducted into the World Figure Skating Hall of Fame.

From 1956-1960, American figure skater Carol Heiss was the most prominent figure skater on the world stage. She began to skate at the young age of six, winning her first World Championship in 1956, at the age of 16. In the same year, she was narrowly beaten at the Olympic Winter Games in Cortina d’Ampezzo, Italy, losing to fellow U.S. skater Tenley Albright and winning the silver medal. Between 1956 and 1960, Heiss dominated her sport, winning the North American Championship in 1957 and 1959 and the U.S. National Championship every year from 1957-1960. In 1960, Heiss finally won her first Olympic gold at the Squaw Valley, California Winter Games, and was also given the honor of speaking the Oath of the Athletes at the Opening Ceremonies.

Heiss was known for her dynamic coaching duo of Pierre and Andrée Brunet, who were formerly Olympic and World Champion pairs skaters. Under their guidance, Heiss became the first-ever female figure skater to land a double axel. After her Olympic career, Heiss married Hayes Alan Jenkins, a male figure skater from the United States who had also won a number of prestigious titles and medals in the sport. She went on to have a brief career skating in ice shows and also starred as the title role in the comedy film Snow White and the Three Stooges (1961).

One of the most well-known and decorated athletes in figure skating, Michelle Kwan has become a household name in the sport ever since her debut in 1994. Her skating career began much earlier than that, however. Born Kwan Shan Wing, she began skating in 1985, at the age of five, and won her first competition in 1987. She made her U.S. skating debut in 1994, earning an alternate spot on the U.S. Olympic Team. In 1995, she placed fourth in the World Championships before finally winning her first U.S. and World Titles in 1996, and later finishing second to Tara Lipinski in both championships in 1997. Her first Olympic victory, a silver medal, came at the 1998 Nagano Winter Games in Japan, where she was the favorite for gold but once again narrowly lost to Lapinski. Kwan earned a bronze medal at the 2002 Salt Lake City Games and won her fifth World Championship in 2003.

Kwan claimed her ninth U.S. title in 2005 but later that year finished fourth at the World Championships, marking the first time she had not medaled there since 1995. That event proved to be the last of her competitive career, though she did qualify for the U.S. Olympic Team in 2006 but had to withdraw due to injury. After her skating career, Kwan went on to earn a Master’s Degree in International Relations from Tufts University and eventually became a senior adviser at the U.S. State Department. She worked for the Presidential campaign of former U.S. First Lady and Senator Hillary Clinton in 2016, and more recently, has been nominated to serve as U.S. Ambassador to Belize by President Joe Biden in 2021.

A newer entrant onto the skating world stage, Yuna Kim has made a name for herself in the sport by winning a number of prominent medals and titles. In 2006, she won her first World Junior Championship at 16. In 2009, she made it to the World Championships, where she won gold for the first time. The following year, during the 2010 Vancouver Winter Olympic Games, Kim was a favorite for gold. She dazzled in her short program, choosing to skate to a selection of soundtracks from the James Bond film series and impressing the judges with extremely difficult jumps such as the triple lutz and triple toe loops. Her performance earned a record-breaking 78.50 points, giving her a huge lead going into the free programme. She impressed just as much in that competition, earning another record score of 150.06. Overall, Kim ended the Vancouver Olympics with a staggering combined score of 228.56 points, which has since gone unbeaten. Her amazing performance also earned her the distinction of being the first Korean skater to win Olympic gold.

Following her Olympic triumph, Kim won silver medals at the next two consecutive World Championships, followed by a two-year break from skating. However, she remained in the Olympic circle by serving as an ambassador for Korea to the IOC, giving a stirring speech that helped Pyeongchang secure the honor of hosting the 2018 Winter Games. In 2013, Kim returned to skating and won her second World Championship. She participated in the 2014 Winter Olympic Games in Sochi, Russia, narrowly losing the gold medal to Russia’s Adelina Sotnikova but winning silver. After the Sochi Games, Kim retired from competition to pursue other interests, leaving behind an impressive record of professional performance.

An Olympic gold medallist from the United States, Peggy Fleming’s journey is notable for the immense adversity she overcame to achieve skating greatness, and the sacrifices made by her family and loved ones to help her reach her dreams. Committed to helping their daughter achieve her skating goals, Fleming’s father relocated the family twice during her youth to find his daughter the best trainers. At the same time, Fleming’s mother personally sewed all of her daughter’s costumes for competition. Her family’s efforts, and her natural skill, led Fleming to great heights, including a U.S. Championship in 1964, after which she made her debut at the 1964 Innsbruck Winter Olympic Games, coming in sixth. From 1964-1968, Fleming won the U.S. Championship every year. She also won the World Championships in 1966, 1967, and 1968, as well as a North American Championship in 1967. Fleming’s first Olympic gold medal came during the 1968 Grenoble Winter Games, where she had the distinction of winning the United States’ only Olympic gold in the entire competition. This victory was a huge morale boost for the U.S. and helped increase the popularity of figure skating in America.

Kristi Yamaguchi is an American figure skater who helped popularize the sport around the globe. She began skating when she was only six years old and won two gold medals in junior competitions, one in singles and the other in pairs. She also won the junior singles U.S. title in 1986 as well as two senior pairs U.S. victories later on. In 1992, Yamaguchi became the first Asian-American to win an Olympic gold medal when she took home a gold medal in the ladies’ singles competition in Albertville, France. To add to her resume, Yamaguchi won back-to-back World Championships in 1991 and 1992. After turning professional in 1992, Yamaguchi has gone on to partake in many successful ventures. She toured with the famous Stars on Ice figure skating show and even started the Always Dream Foundation. With her boundary-breaking success, Kristi Yamaguchi’s influence on the sport of figure skating can not be denied.

Sjoukje Dijkstra is a former Dutch figure skater who competed in the mid 20th century. Her father, Lou Dijkstra, was an Olympic speed skater who helped drive Sjoukje’s passion for figure skating. She began skating when she was only six years old and eventually dropped out of school to focus solely on skating. Dijkstra competed in her first Olympics at the age of 14 and won a silver medal in the following Olympics. She finally won her only gold medal at the 1964 Olympics in Innsbruck, Austria. She also won every World Championship from 1962-1964 and every European Championship from 1960-1964. Dijkstra was known for her powerful style of skating, focusing more on complex tricks rather than balletic dancing. Her dominance in the sport over a multi-year period has established her spot in the history books.

What country has the most Olympic gold medals in women’s figure skating?

Who has the most Olympic gold medals for women’s figure skating?

Who has the most World Figure Skating Championship gold medals of all time?