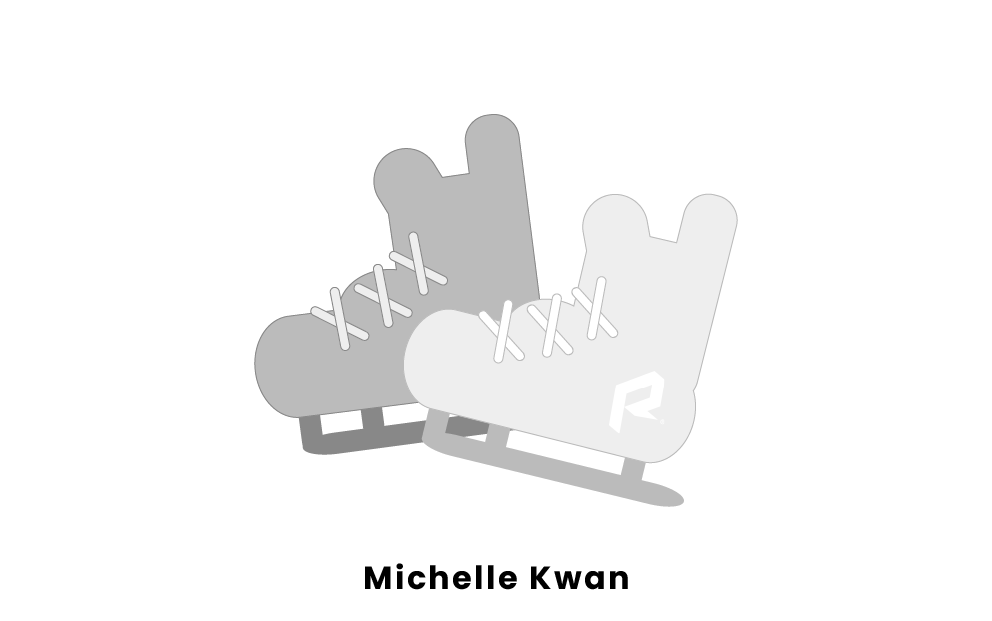 Michelle Kwan is a retired American figure skater who is widely recognized as the most awarded athlete in her sport. Born July 7th, 1980 in Torrance, California, Kwan began skating at the age of five and claimed her first win just two years later. She began competing at the senior level at 12 and soon earned an impressive skating resume. She medaled in both the 1998 and 2002 Olympics but was never able to secure gold.

She does however claim 43 championship wins, including nine US and five World Championship titles.3 Kwan ultimately left the sport in 2006 after suffering a groin injury while preparing for the Turin Olympics later that year. After retiring as a skater, Kwan refocused on her education and began working as both a US diplomat and advocate.

Despite humble beginnings, Michelle Kwan has amassed an estimated net worth of $12 million.4 Now a US diplomat, Kwan’s most lucrative years were at the height of, and shortly after, her skating career. She performed in various ice shows and was the highest-paid participant in the Champions on Ice tours.4 However, the bulk of her wealth came from her multi-million dollar endorsement opportunities, including partnerships with Disney, Coca-Cola, McDonald’s, and Chevrolet. In the early 2000s, Michelle Kwan was one of the highest-paid female athletes.

Michelle Kwan’s artistry and athleticism made her one of the most celebrated competitors in figure skating. She secured the alternate position for the US Olympic team in 1994 and took 4th in the World Championship that same year at the age of 14. She gained significant momentum in 1996, earning her first US and World titles.1

Her skating career came to a halt in 2006 when she was injured while training for the Turin games. Then 26, she decided to pivot towards a new career goal. Rather than prepare for the 2010 Olympics, she returned to school and soon became involved in American politics, working as a senior advisor for the U.S. State Department, as well as on both the Clinton and Biden presidential campaigns.

Despite never receiving an Olympic gold medal, Michelle Kwan is still considered the most highly decorated American figure skater and was well-renowned throughout her career. After qualifying to compete as a senior-level skater at the age of 12, she went on to place 6th in the 1993 US Championship, the youngest skater to compete as a senior in 20 years.

The Olympic gold always narrowly eluded her, but Michelle Kwan does hold Olympic silver and bronze from 1998 and 2002, respectively. The Olympic & Paralympic Committee named Michelle 2003’s Sports Woman of the Year, and she is also one of only four figure skaters in history to be given the James E. Sullivan award.5 In 2012, she was inducted into the Figure Skating Hall of Fame. A decade later, in 2022, she was also inducted into the Olympic and Paralympic Hall of Fame.

Michelle Kwan was born to Danny and Estella Kwan and is the youngest of three children. Michelle, her older sister Karen, and her older brother Ron are first-generation Americans after their parents immigrated from Hong Kong. Her parents worked exhaustively to provide her with the training opportunities that led to her lucrative career.

After leaving her figure skating career and entering the world of American politics, Kwan was introduced to White House national security expert Clay Pell, and the two got engaged in 2012. They were married the next year and settled in Rhode Island. After four years of marriage, the couple split in 2017.6 After several busy years of work on political campaigns and as an international liaison, she returned to her native California in 2020 during the Covid-19 outbreak.8  She began enjoying a slower-paced lifestyle close to family. Much of her personal life remains private, but we do know she welcomed her first child, Kalista Bell Kwan in 2022.

Why did Michelle Kwan stop skating?

Michelle Kwan retired due to a groin injury she suffered in 2006 while preparing for the Olympic games in Turin, Italy, which took place later that year. Unable to compete to the best of her abilities, she pulled out of the Olympics and was replaced. She was 26 at the time. Rather than regrouping and training for the 2010 Olympics, she set her sights on contributing to her country in a new way, becoming heavily involved in American politics and diplomacy.

Does Michelle Kwan have siblings?

Michelle Kwan has two older siblings, Karen and Ron Kwan. Just like Michelle, they both grew up on the ice, Karen as a competitive figure skater, and Ron playing ice hockey. Karen and Michelle were both coached by Frank Carroll growing up, and Karen placed 5th in the US Championship in 1995. As of 2021, all three siblings live near each other in their home state of California.

Where is Michelle Kwan from?

Michelle Kwan is a first-generation American, her parents having immigrated from Hong Kong. She rose to fame in the 90s when there was very little Asian American representation and soon became the face of the sport. She was born in Torrance, California, and grew up in Lake Arrowhead, training at the Ice Castle International Training Center. She has since returned to California and has her own ice rink, the East West Ice Palace in Artesia, CA, not far from her place of birth.