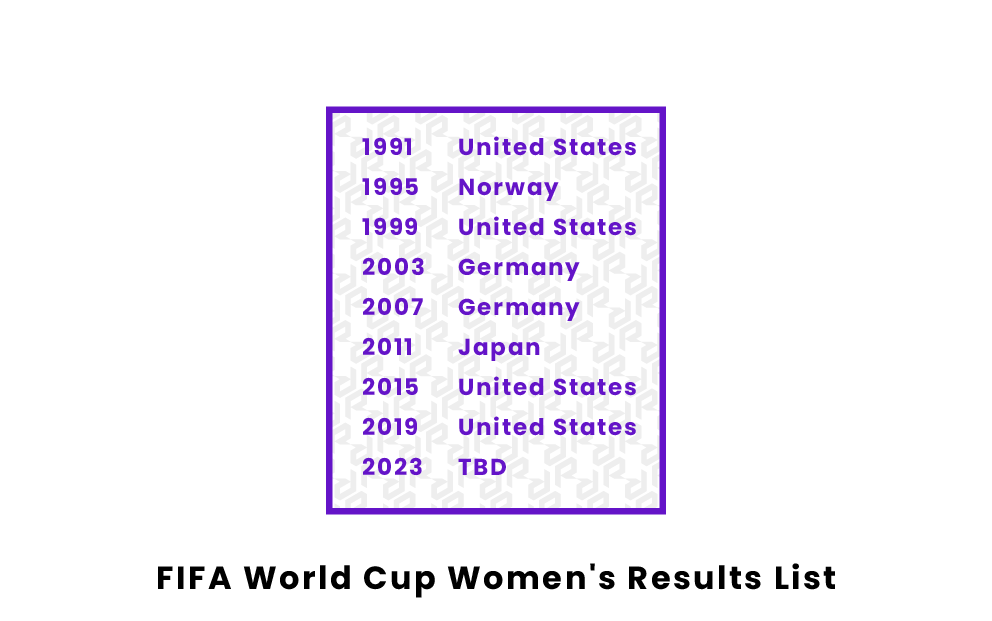 Though the men’s World Cup started in 1930, it wasn’t until 1991 that women’s soccer players around the world got the chance to compete on the sport’s biggest stage. Since then, there have been eight versions of the tournament and four different winners. To see a list of all the World Cup results, keep reading below.

Below is a list of every World Cup, the Host city, the champion, score, and runner-up. In total, there have been eight women’s World Cups since it started in 1991.

The first-ever women’s World Cup was held in 1991 in China. The United States came in as a popular pick to be first-time champions, and they delivered on that potential, advancing to the final match, where they took down Norway 2-1.

Four years later, the Norwegian national team came back on a mission. They blew through the qualifying stages and, after a 1-0 defeat of their American foes, made it to the championship match. They bested Germany 2-0 and became the first European nation to win a women’s World Cup.

In 1999, the women’s side of the World Cup had become increasingly popular. Crowds and television ratings were on the rise, and the tournament held in the United States grabbed a lot of international attention. The final match, between the U.S. and China, will go down as one of the most legendary matches in the history of the sport. The game was sent to penalty kicks, and the Americans converted on all five of their attempts to beat China by one in a 5-4 shootout. With over 90,000 fans in attendance, the match still represents the largest crowd ever for a women’s sporting event.

After seeing a huge spike in the popularity of women’s soccer following the 1999 World Cup, FIFA decided to once again host the event in the United States following the outbreak of SARS in China (which had been originally designated as the host nation). Germany, who had been to the finals eight years earlier, returned once again to face Sweden. This time, the Germans were victorious, beating Sweden 2-1 to become the first country ever to win a World Cup on both the men’s and women’s sides.

After winning the previous World Cup, Germany came out firing in 2007. They won the first match of the tournament by a score of 11-0 over Argentina, the most goals scored by one team in women’s World Cup history. That opening win provided a taste of what was to come, as the German national team dominated their way to a world title, not allowing a single goal in any of the six matches they played.

After such an amazing display of soccer talent, the women’s World Cup moved to Germany for the 2011 setting of the tournament. Both Japan and the United States breezed through the group stages, but things became more difficult once in the knockout portion of the tournament. Still, both teams overcame various obstacles to meet in the final, and they were evenly matched through extra time. Japan was able to take the advantage in penalty kicks, however, winning 3-1 in the shootout to take home their first women’s World Cup title.

The 2015 women’s World Cup saw a number of changes from previous versions of the event. The tournament was held in Canada, and games were played across five different time zones, the most of any World Cup ever. The field also expanded from 16 to 24 teams, meaning champions had to work harder to make it all the way. And, it was the first World Cup for either men or women to be played on artificial turf rather than grass. Despite all these new variables, the same two teams met in the championship match. The U.S. and Japan once again squared off, but this time the tilt was not so even. The American team won 5-2 to claim their record-breaking third women’s World Cup win.

The most recent women’s World Cup was held in 2019 in France. The United States came in looking to become only the second country ever to successfully defend their title in the tournament (the first being Germany), and they did so emphatically. They absolutely crushed the group stage, outsourcing their opponents 18-0, and advanced all the way to the final match, where they faced the Netherlands. The Dutch were no match for the vaunted American squad, and they fell in a 2-0 defeat that awarded the U.S. their fourth women’s World Cup.